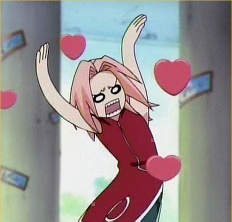 For the rest of the evening, I was so genki I kept cracking puns. I bet my co-workers wanted to smack me. XD