Yesterday was great! I trained at Syndicate for the first time in three weeks. I’ve come home! grappled a lot, then some striking before I hurt my damn eye. It’ll heal in a few days, but it puts the breaks on my training. 🙁 Sparred with the new female member of our gym, Kalecia! I like her! 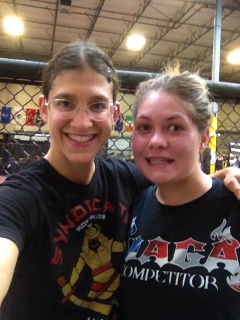 A reporter from Japan who writes for “Fight and Life” and mmaplanet did a feature on me, and also interviewed John. That was so cool. I’m so excited to be featured in Fight and Life! Literally all of my Japanese MMA-related friends and teammates read it. 😀 He’s gonna send me one.

I dropped off the reporter, went to the medical clinic to get drops for my eye. 🙁 It hurtssss.

I then went to the UFC with my coach John, which was super fun. 😀 Then Julianna sat down on one side of us, and my bestie Heather on the other side! 😀 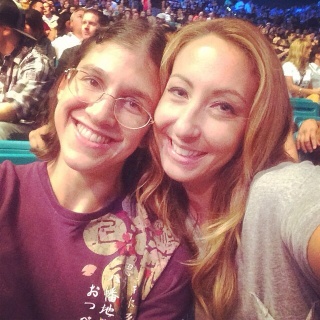 <3 <3 <3 Such sappy best friend loviness. haha I'm so excited she is on TUF 20. Catch The Ultimate Fighter season 20 on Wednesdays on Fox sports 1. 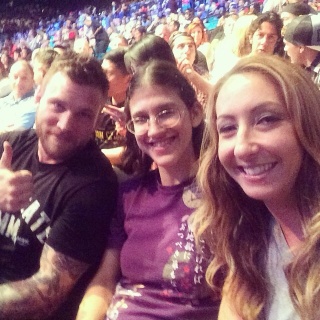 Surrounded by my favorite people! 😀 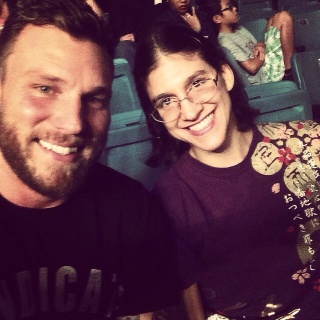 Catch him on the popular reality show Couple’s Therapy Wednesday nights at 8 PM PT on VH1….. 🙂

What a great night of fights! It was my first time watching Mcgregor, and the Yoel Romero vs Tim Kennedy fight? But I wanted to cry when my former training partner Mizugaki got destroyed by Cruz. ;_;

After the fights, we ate burritos and went to this club “Life” in the new SLS Hotel and casino. It was my first time. I usually get narcoleptic after 10 PM, but since I arrived back in the US yesterday, I was still on Tokyo Time. Which was 2 PM. lol Totally out of my element, but it was cool since my team was there. But I ended up talking shouting to a few people I didn’t know. I couldn’t hear anybody! 🙁 And the strobe was hurting my eye, so I left after a little bit. But the atmosphere was cool! I liked the beat of the music. The lights were so cool, and random ladies were dressed in costumes swinging overhead! It was so surreal.

I’m so happy and lucky to have an interesting, exciting life. I certainly work hard for it. lol So I’m just enjoying it to it’s fullest, realizing that things only happen once and don’t last. However, no matter what happens in the future, I’ll always have these moments, these memories to treasure forever.…