I’m pretty convinced that I tore a muscle in my leg. It’ll be a week as of tomorrow and my right leg is noticably larger. -_-; But it doesn’t hurt as much.

Just call me “Miss Accident Prone.” It’s not like I’m putting myself in any dangerous situations or anything. -_-; Time is flying by too fast! I have goals that I can’t work towards! How frustrating! ~_~;

Anyway, so on Monday I couldn’t train, so I decided to see the ONE PIECE EXHIBITION in Roppongi Mori museum! 😀 So excited! I watched the anime from 7 AM to 10 AM in preparation. 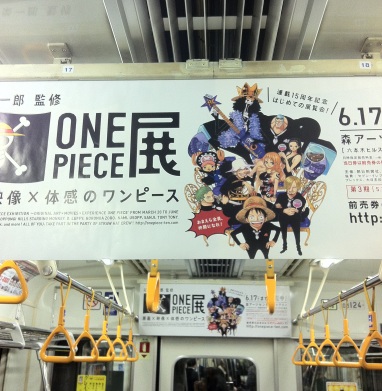 XD Then practically danced to Roppongi only to discover….! Tickets were sold out for morning times. What? I had read that tickets were being sold in advance in convenience stores and other places, but I thought that was only a suggestion, not a necessity. 🙁

I was really bummed. Then I decided to call Sakura and see if she was free! She was! So we met up and had a girls’ afternoon in Shinjuku- shopping for iPhone cases, doing to Don Quixote, having tea and tako yaki! I bought One Piece chopsticks! We ate Mentaiko cheese tako yaki, and also pepper bacon ones in Gindako. 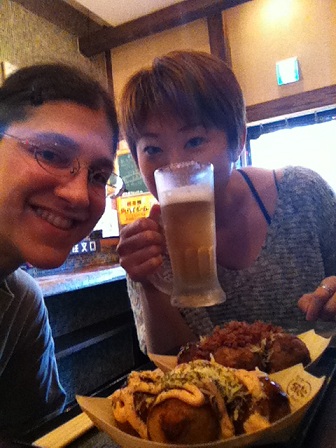 It turned out to be a wonderful day.
I’d been really worried about her, and yesterday, I wrote this entry ‘Starving to Death to Fight’ about her fight and condition. Please read, if you haven’t already…it’s really important.

On Tuesday, I worked in the morning and then the typhoon hit. :O So the company canceled lessons sent us home with pay, weeeeee! As they should. Other companies sent other employees home, because the trains were SURE to stop. I made it home, and for the rest of the afternoon and evening, the wind was howling and blowing stuff around outside. It was less rain and more wind.

In an attempt to be productive, I dusted my apartment, hemmed my pants, and did other chores I’ve been putting off.

Today, still can’t train :(. I talked to my cousin! 😀 <3 And Tony, both for hours. Got great training advice from Tony, thanks so much!! Went to work, and hung out with Karla, my new friend and co-worker! 😀 She's from the Philippines. We come from different worlds, but have very simliar beliefs. I really enjoyed hanging out and she EVEN BOUGHT A CRAZY VEGETABLE PEN! 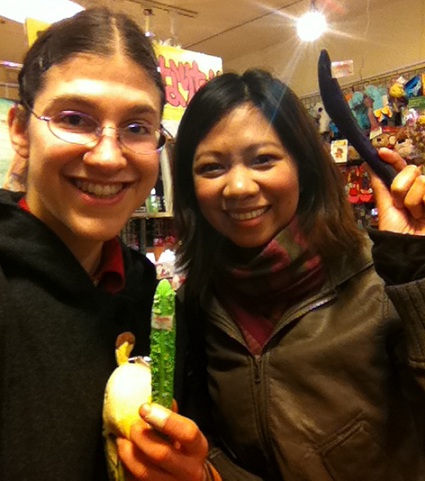 What an excellent addition to our workforce. So very excited. XD

We enjoyed Village Vangaurd, a most interesting trinket’s store. That’s the place I found the ‘poop’ toys before. XD 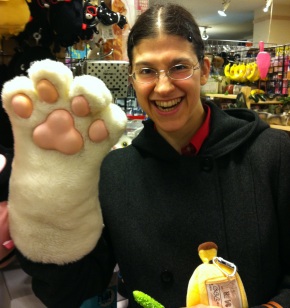 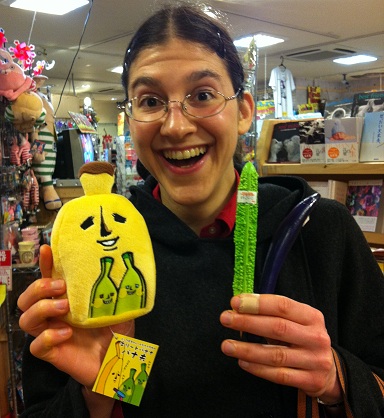 I found this AWESOME BANANA train pass case! Was gonna buy it but thought, well, I already have a cat one and it was kind of expensive. :/ So I should resist. Boy was that hard. I DID buy the goya and eggplant pen. KARLA ALSO bought the eggplant pen. EGGPLANT SISTERS!!

Then my young-adult’s lesson was observed by the head of Berlitz Japan’s Kid’s department for quality control. o_O; No pressure there. But it went great! And then I had a tough assessment, but with that confidence booster, I was ready for anything.…