My Sunday- pets, food, and reflection

Today, I taught the TOEIC course to a wonderful lady about my age…she knew SO many idioms, it was very impressive. She knew “it came of the blue.” o_O

I had a nice lunch- lots of chicken and veggies, a rice ball and two castella balls. Didn’t over-do it! Felt good. No afternoon crash. Finished work at 4:50.

I feel almost totally over my cold! o_O; Bizarre, that was. No more runny nose or sneezing or anything. I still didn’t lift weights or exercise, though. After work, I ate a few slices of bonito sashimi, this awesome miso-flavored squid that I’m SO buying again. :D~ plus a carrot, one cucumber, and small piece of engawa sushi…..and engawa is….*google* halibut? SO GOOD. It’s like..juicy and soft! I love that place’s pickled ginger.

I decided that, after passing this “NY Whoopie Pie stand” for weeks, I’d try one. Firstly, it was SO tiny! Touch your index finger to your thumb and that’s how big it was. For about $2.60 (200 yen). The flavor was supposed to be banana and chocolate, but it had no flavor. Like, zero. If I closed my eyes, I could detect some faint sweetness, but would haven’t been able to identify it! PATHETIC. -_-; I decided that it wasn’t even worth the calories entering my body, so I took two bites and then tossed the other two. (bites. lol that’s how small it was) 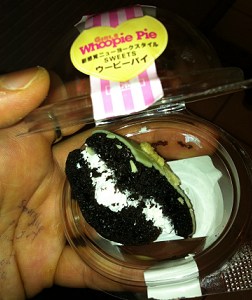 I decided to try Krispy Kreme donuts because they had pretty Halloween donuts. I had half of one. 😀 That satisfied my desire for dessert and cheating, but wasn’t TOO bad for me. I was good today. 🙂 I didn’t get a stomach ache, either. o.O; Weird. Does Krispy Kreme in the US have Halloween donuts? 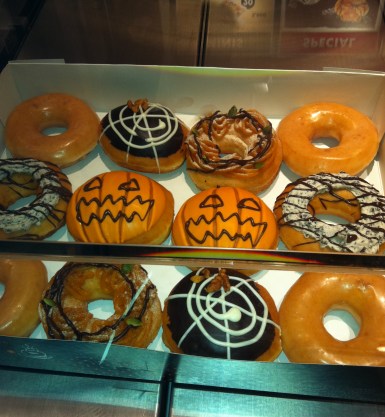 After that, I bought super glue to fix Luffy (I’m gonna video blog about that tomorrow morning), tried on work-shirts at Uniqlo but none fit me (so what else is new) and then decided to go to Unidy, a home goods store, under Lazona Kawasaki.

I LOVE that place, although I don’t shop there TOO much. I like window shopping, so to speak. I am confident that it has everything, like Walmart except a little more expensive.
It has a pet section! Oh no…oh yes, I had to look.

I’ve always wanted a fish, you see, so my mom got me a gold fish and a simple fish bowl. But it always died on me! Maybe I couldn’t get the chemical balance right, or temperature, or something, but I’ve had two and they both died within a week. I was too sad so we gave up. 🙁 I want a beta, actually, but I’m afraid it’ll suffer the same fate as my two gold fish….

I used to have hermit crabs. I’m a crab girl. However, I got traumatized after I decided to have three at the same time. One bully always attacked the other ones, and in the end, attacked one as it was trying to change shells. It died a horrible death because I tried to help the shy one and move its naked body closer to the shell, but it freaked out and went in the OTHER direction, naked, where the bully finally found it and tore it to pieces. < I had to have my mom take care of its remains because I couldn't bear it.... I also was so angry at the bully, that I didn't want to take care of it anymore, so my mom ended up feeding it. X_X I felt responsible so I never wanted to have another crab..... Actually, I DO WANT one, but. ;_; I'm a horrible owner... I also love hamsters. I love them the most. I had one in Japan, actually. I loved Chiriko so much! 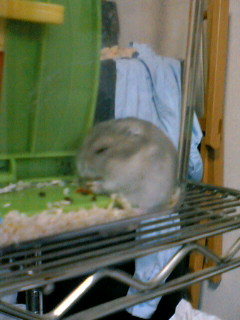 There he is! My baby ISN’T he SO CUTE! 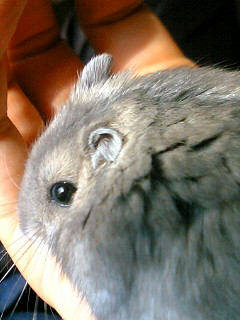 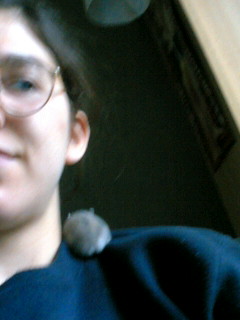 Look, there’s his little butt!! <3 <3 <3 But he also died a sad death...and it was all my fault. I went home for Christmas for two weeks and got a co-worker to go into my apartment and give it water and food every two days. Nearing the end, I told him he could let him go three days since I would be home soon. Unfortunately...it COULDN'T go three days. I found him cold and shriveled... totally not my co-worker's fault. ;_; I can't bear it... *sigh* But I love them so. I want another hamster. ;_; But ....well, it's pointless now because I don't have any friends in the area who could come and feed it when I travel. :/ My neck feels much better. I MIGHT be able to train tomorrow. If I still have a cold, I don't want to give it to BJ or Omigawa-san, since they're fighting in a few weeks. If I feel perfect, I might go... …