It’s the year of the dragon, and the Japanese are really big into that. The bakeries are trying to cater to that and have made….DRAGON BREAD!! 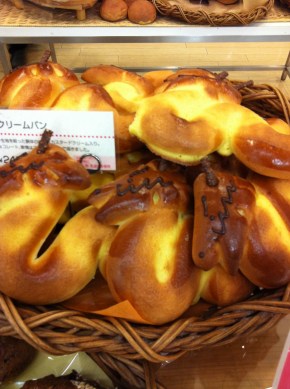 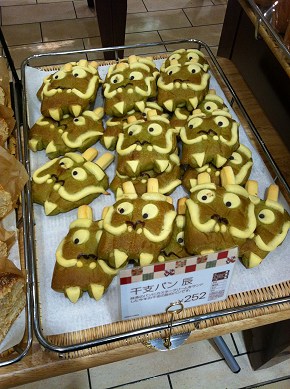 It’s actually just plain white bread with cream in the middle, so I don’t buy it because it’s not delicious for me. It just looks cool. Pictures are good enough.

So yesterday I had to teach my large group of kindergarten kids fruit names and “I like/ I don’t like.” I was wondering how I’d get them to get the concept. If I hold up a happy face and sad face picture, they think happy and sad. So I printed out a picture of a girl drooling over yummy food. Then I had an idea. I’d use Peppy! 😀 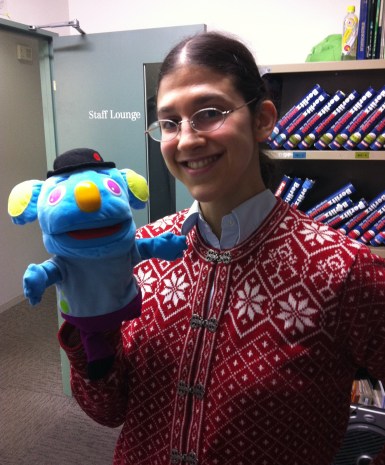 This is Peppy. A kind of…funny-looking character my company made. u_U I like him because his mouth moves and only two of the four puppet’s mouthes move. But you can see the fingers because the mouth is a hole. If I may dare to say, it’s really poorly designed, but I try to make the best of it. ANYWAY, I told the kids that his name was Mr. Koala. They’d never seen him before, so I had their rapt attention. 😀 I held up a flash card of a banana and said, “Mr. Koala, do you like bananas?” I made him answer in a funny voice, “Yes! I like bananas! I like bananas!” Then I stuck the card in his mouth and I pretended to scarf it down. The kids shrieked with laughter. I did the same for apple and orange, but when it came to grapes, I had him say, “No, I DON’T like grapes.” I gave the card to the kid next to me and motioned for him to feed Peppy. Peppy chewed the card and then spit it out with “Patooey! BLEH!” The kids SCREAMED with laughter. XD XD XD

They understood. So I passed the card around the circle, and the kid had to say either “I like grapes” or “I don’t like grapes” to the kid next to them. Usually, if I do an activity where each one has a turn and everyone has to watch, kids get restless and stop paying attention, but they all tried SO hard to say it. :D!!!! Everybody liked grapes. Then I did the same for lemon, and about half the kids didn’t like lemons, to that worked out. The Japanese adult staff helped me out by saying in Japanese “If you don’t like it, say “I don’t like grapes.” and if you do, say “I like grapes.”” 🙂

The Japanese staff helper said in Japanese, “So Mr. Koala doesn’t like grapes!”

I’m very pleased with how that turned out.…