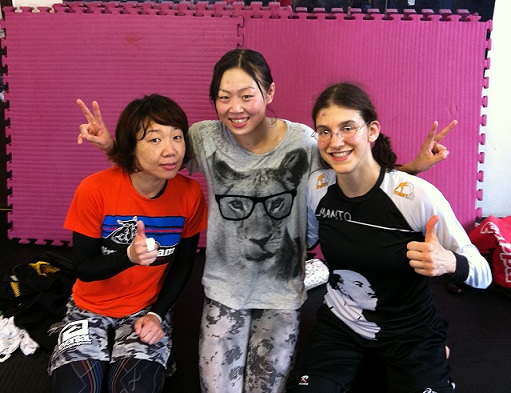 Steve said I’m getting buff! XD I dunno, but thanks anyway!!! <3 <3 <3 I hope so! Must be all the ice cream I've been eating. XD MY POWER FOOD!! *coughBrittanyParfaitofLOVEsooncough* Katsumura-san and I practiced English for three hours after practice, instead of our usual 2. He's really improving. I'm impressed daily by everything he can remember and produce fluently. High accuracy. Then I went for my osteopathic treatment with Mihara-san. Poor guy is Mizugaki's friend and was going to go watch his fight in Las Vegas. Mizugaki's fight got canceled with the rest of that UFC card, so he has plane tickets and plans in New York for the following week, so he couldn't cancel! So he's going alone. lol I really would have liked to teach him more emergency English before he left, but oh well. I taught him a few things. Then, home again. Exhausted. Almost done writing my dad's birthday present. My friend from the US is visiting Japan for a few weeks! 😀 He's coming TOMORROW, so I wanna be finished with stuff before he comes. :O I'm kind of rushing now. My dad's birthday is coming up.... I should mail it by next week.