about my fight in the UFC

It was an honor to fight in the UFC last night- the ultimate stage that every fighter is aspiring to.

I had three goals last night in the UFC: 1) do the techniques my coach John Wood taught me and perform well, 2) prove that I belong in the UFC, 3) win the fight.

If I do the first two, the third would come naturally. 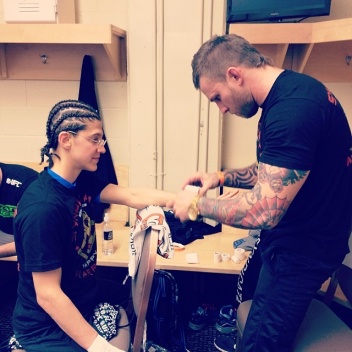 I met the first goal! I didn’t meet the third goal. Last night I thought I met the second goal. Someone I respected last night said, “You belong here!” I was so happy I started to cry. But then I read the Underground Forums, fans negative opinions, and now I’m depressed. :{ Even my UG brothers who usually support me don’t think I belong. They say that my stand up was the worst they’ve ever seen in the UFC. Oh, man. :{

Well, Mike Pyle, a coach at my gym, said it best to be at our dinner last night: All that matters is what Roxy feels and what Roxy thinks. And take things away from the fight and build on it to make myself better. That’s the bottom line. John said he was pleased with my progress. *I* think that my stand up was the best it’s ever been in MY career. Am I a super-awesome striker? No, definitely not. But when I was in there, I could feel my technique coming together. I could see and feel her reactions and movement like never before. I actually think I did worse when I went for the take-downs. I should have done a few things differently.

It bothers me a lot when websites are like, “This is Roxanne’s sixth loss in a row!!” IT’S NOT, man, because I won my fight to get into the house. It doesn’t go on paper, since it’s TUF. But my mind is not on a 6 fight losing streak. This was my 28th fight. I’m on a two-fight losing streak, damnit! There’s a difference!

A UFC staff member asked me if I needed anything after the fight. I said, “Ice cream.” He said, “I can’t get you that, but I can get you cookies!” So he did! Hah <3 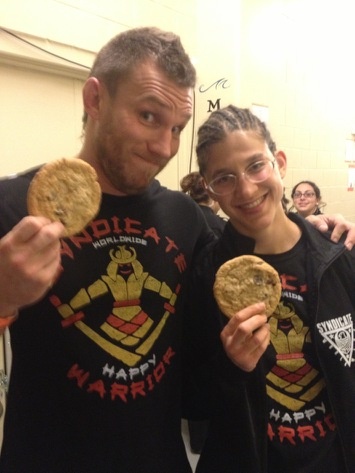 Me and my coach

It was cool being in the same locker room as Jessamyn, Shayna, and Julianna.
It was awesome seeing my former coaches and housemates again. It’s kind of bizarre how much of a family they seem now! I love them dearly.

btw if you’d like to buy my T-shirt, you can here!
http://www.syndicateworldwide.com/product/happy-warrior

It was SO hard watching the fights of my TUF-mates. Peggy and Jessamyn, man I wish they could both win. Davey and Chris…both are awesome. Julianna and Rakoczy, I love them both. It hurt my heart! But congrats to the winners.

It was an amazing experience. Man, I entered, walking into the light of the camera guy, who was walking backwards… fans were hanging over the railings screaming out and clapping. All the bright lights and colors. It was surreal and awesome. It was an honor. It was my dream. I hope everyone liked my music – The Power Rangers! LOL And I hope people were entertained by our fight. The people who came up to me afterwards asking for pictures….thank you! It really made me feel loved. How could I be depressed when other people were so happy about meeting me? Seriously, thank you.

It was cool meeting Ariel Helwani again! 😀 One of my favorite reporters! And Royce Gracie (who had given me by blue belt! He didn’t remember me, though, lol). I didn’t recognize him without the hair, so we’re even! lol I was like, “Are you….are you….?” I didn’t want to seem dumb if it wasn’t him. LOL He said, “Royce.” haha 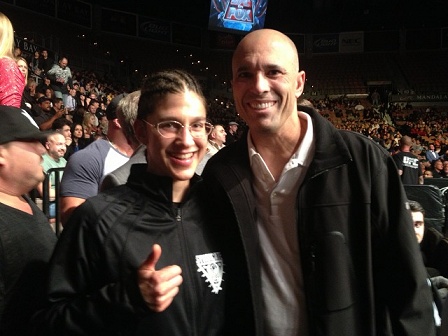 And Stephen Bonnar was sitting right in front of me when I went out into the stands! I was like, “Pssst, Heather, is that Stephan Bonnar?!” 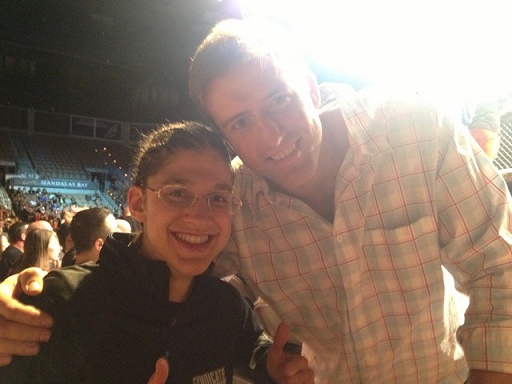 and did I meet Kevin Randleman?!? I think it was him! He was nice to me! And hearing Mr. Bruce Buffer announce my name! 😀 He came up to me afterwards! What an honor.
Thank you to the UFC for making my dream come true. Thanks to Raquel for the great fight. 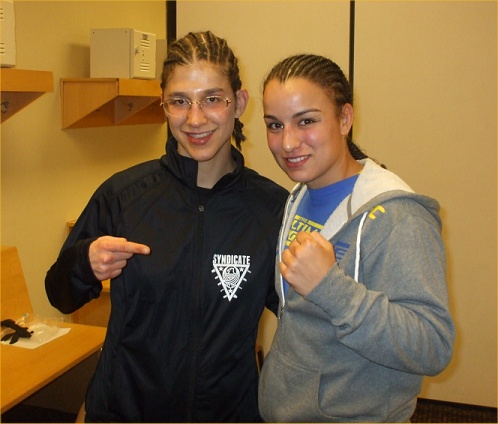 well….. I’m feeling pretty torn right now. Please with my own improvement, but bummed about my future. 🙁 But in reality, we don’t live in the future. It is not here yet. And it’s truly impossible to predict. Right? I enjoyed yesterday. Yesterday was worthy of a long-term dream. When I smiled on the camera, it wasn’t forced. I fought in the UFC!!! 😀…