I was talking to my Japanese friend Goto-san about censorship. It was sparked by me passing posters for “Attack on Titan” in Walmart. I saw them, and a few seconds later, a mother pushing kids in a cart passed by, and a little boy who looked about 8 exclaimed, “Oh, Attack on Titan posters!!!”

I thought, “Isn’t he a little young to be watching that?” Giant titans eat people and tear them apart and their guts go flying everywhere as they scream in terror. I feel like parents don’t sensor their kids nowadays. More and more violence is on TV and video games, and nobody seems to care. 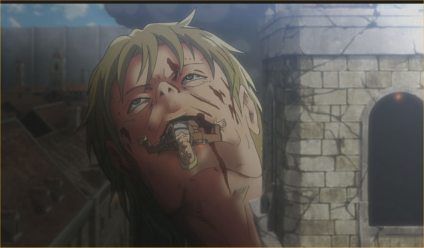 I really feel like exposing anybody to violence influences them subconsciously. Either it desensitizes them or influences them somehow. BUT there are no studies to say that watching violence makes someone violent. Studies are inconclusive and people I’ve talked to always remind me of that.

I know that regarding myself, I’m a very sensitive person and I’m very glad my parents censored what I watched as a kid. Now, I make sure not to see super violent movies with lots of shooting and violent death and blood spurting everywhere. It bothers me. 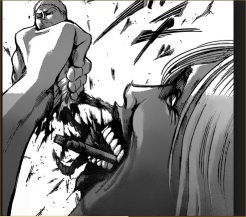 Getting back to my conversation with Goto-san, he was saying that the topics are more important than the imagery. Kids know that giants eating people is fiction. However, stuff like bullying, suicide, child pornography, and themes are more important in censorship. He mentioned that nudity is acceptable in anime and for the general public to see, whereas it’s more prohibited on American TV and movies and shows are rated R and stuff. However, there’s more of a problem with child pornography and rape and kidnapping stuff in America than Japan. I said that that’s just culture. Hmm.

So imagery and topics….

He said that morality is can be taught through anime. Like “One Piece,” for example. It really focus on the topic of friendship and nakama. Valuing people, being loyal to people, protecting those you love. Some day that the school classes about morality are unneeded since we have “One Piece.” 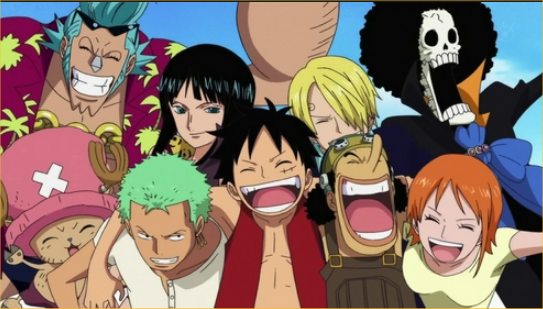 I totally agree that One Piece has all these themes, and if you get into the anime or manga, it’s really touching and influential.

I wish tests and studies could be more conclusive….

Like over time, kids who play super bloody and violent video games grow up….. how do you define “fine” and how do you measure the influence on their thought process and daily activities?

You can’t say that I’m kind because I didn’t watch violence growing up. Or can you? How do you measure psychological trauma? I know a family friend showed their daughter Poltergeist and she had nightmares for weeks.

Not related to this theme, the fact that this statue exists makes me want to throw up…… 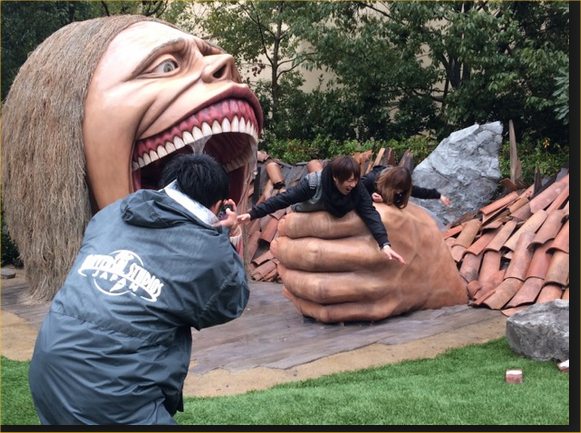 am I the only one who thinks this is horrible? I feel like it’s making fun of death. Those people on the show DIED. Eaten! Ripped apart. Is that so interesting? Am I the only one taking this way too seriously? Is everyone else like “oh it’s just a show hahaha.”

http://kotaku.com/attack-on-titan-statues-are-eating-japanese-tourists-1681228101
Maybe THAT is the point of this whole thing! Maybe I’m desensitized to the violence so take it super seriously and everyone else just sees it as “fiction.” Eren’s mother was eaten by a titan and Eren was crying and mourning her the whole rest of the show. It’s so sad. If my mother got eaten I’d be devastated. Am I taking it too seriously…? It seems nobody else thinks like that. But is that good or bad? or just is?

I welcome your opinions and comments. either on my facebook or on this page or basilisk875@yahoo.com…