Last week my friends Laura Howarth and Molly McCann visited from the UK via Michigan! I only knew Laura a little bit from the Ultimate Fighter season 18, and she didn’t make it into the house. 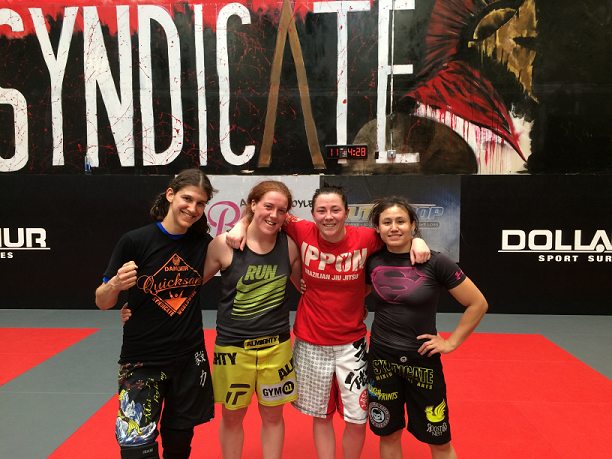 This time, we made better friends and I love Molly! They’re both awesome, fun people and their styles and movements in striking is very similar to what we do at Syndicate. 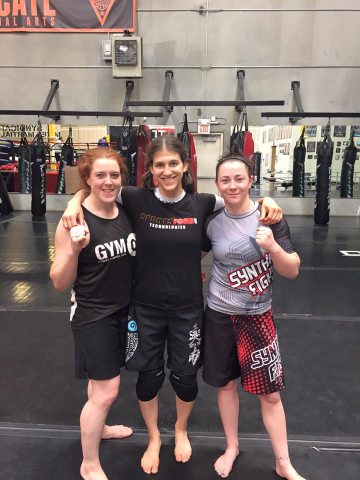 We went for lunch at Skinnyfats literally every day. LOL They just have delicious, healthy stuff. 😀 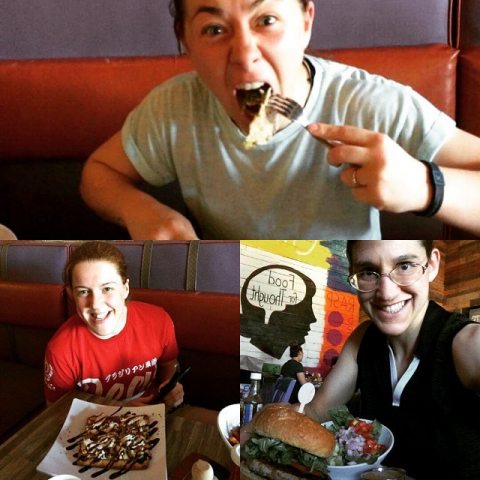 I’ve been lifting weights a lot lately. I want to increase my strength and muscle mass. I never have a good “day” to focus on it, because I’ll be too hurt or sore for MMA training, so I’m trying something different. I’m just lifting what doesn’t hurt. So if my shoulders hurt, I do squats, lunges, stairs, and rows for my back that night. If my shoulders are fine, I do a crap ton of shoulder exercises.

I’m eating more too, so I’m between 142-145 now. I feel heavy and don’t really like it. :/ It’s definitely not all muscle, but I do feel a little stronger. I had started at 140 three weeks ago. Changing one’s body composition is SO hard! There’s so much science behind it. What you eat and how much at what times how often.

But my shoulders are really feeling great. A lot of that is thanks to Luke Rooney, a former Circ du soleil acrobat – sounds unlikely he can be a trainer, but he’s freaking good. 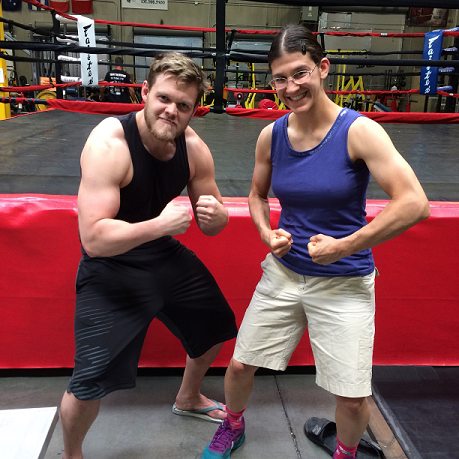 His shoulders are amazingly buff. I want shoulders like that. Well, I don’t because then I would look scary. *_* #TheStruggleIsReal

My back is freaking killing me. It’s funny, for my Raquel UFC fight camp, my back was so painful I thought it’d be my last fight. My chiropractor Jake Steckel’s treatment was the only reason I could train. I cried a lot and toughed it out and tried not to talk about it on social media. Then I started yoga and my back got SO GOOD, I almost forgot it was ever hurt! Then my shoulders started acting up and tortured me for my next two camps. A year later, which is now, it’s reversing again. I strained my back ONCE in wrestling practice that triggered it, and that was two months ago.

The other day a guy in the gym asked me how my back was (which was sweet!) and then asked me if it was ready to retire me. 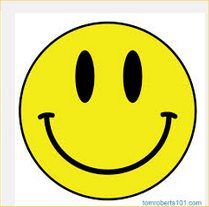 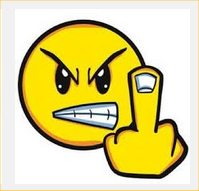 I know he didn’t mean anything bad by it….

But it seems like recently, EVERYBODY Is asking me “so when are you going to retire?” or “what are you going to do after retiring from MMA?” I feel like it’s kind of rude. Like I’m old and should just quit. Dude, I am having a big come back and won two in a row, and dropped a super close decision for a title contention spot. I’m NOT RETIRING YET.

So stop asking, please. I don’t want to think about anything but my MMA goals. I’m not interested in retirement talk, and in fact, I’m getting really pissed off. I know everyone is DYING for me to retire, right? (wth?) I have big goals. My back and shoulders will get better, because they did before, and John said I can do it, and he’s always often right. Wait and see. -_-;

ANYWAY I’ve been training SUPER HARD for three weeks, not really getting a day off. I think it’s effecting my sleep. I woke up at 1 AM and woke up EVERY HOUR until 4 Am when I gave up and got up. 🙁 I feel broken and I’m catching a cold. I usually takes nights off, but I’ve been doing Yoga and adding in weight lifting and lots of stairs just in case I get a sudden fight offer, which I won’t, because there are no flyweights fighting on this next Invicta card.

I’ve been working some new stuff with coach John! It still blows my mind how I’ve been doing MMA for so long and have 31 pro fights and I’m learning something new literally every week. 😀 😀 😀 #TeamSyndicate4Life

Speaking of coach John, it was his BIRTHDAY last Wednesday! 😀

We all gave him body shots at the gym (i.e. hit him in the stomach as hard as we could) and threw him a surprise party! Well, his wife Janna was the mastermind. 😀 I just attended and ate Mexican food. 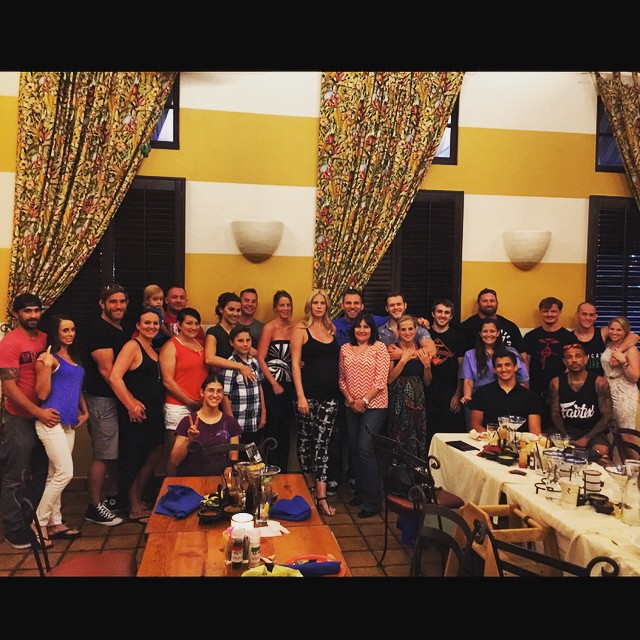 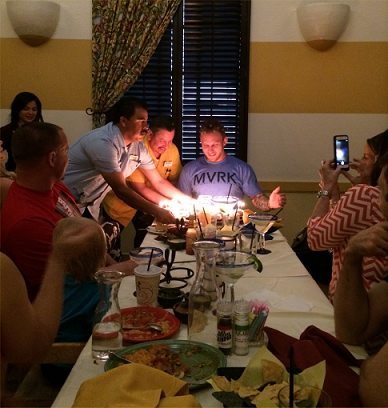 We are so happy he is happy! 😀

I’ve been watching The Arrow obsessively in all my free time. 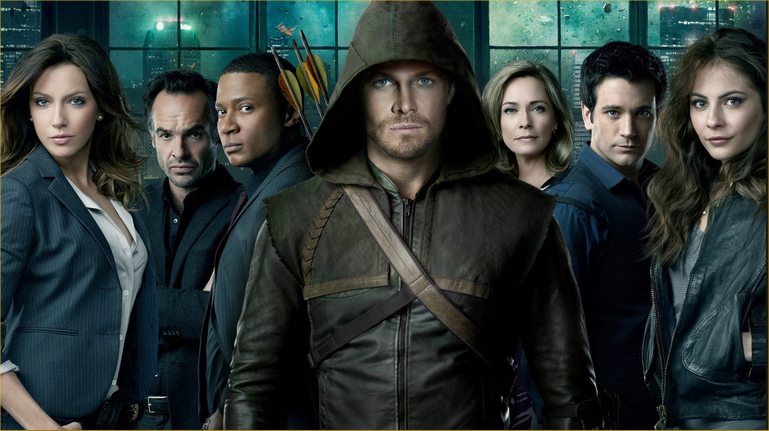 Stephen Amell is hot. *_* I mean, uh he does a good job as Oliver Queen. All the actors and actresses are really talented, I think! I really like the father’s character, Detective Lance, even though he’s kind of meddling. Maybe he reminds me of my father a bit.

I wrote an interview for my new friend Catherine Costigan!
check it out here: Link to MMAsucka.com’s interview!

I also interviewed her opponent Amber Brown, but it’s not ready yet.

I got some Herbally Grounded stuff! 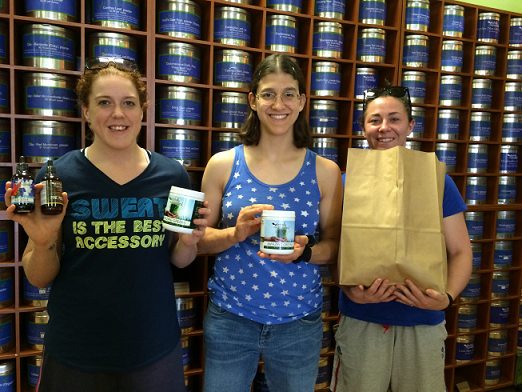 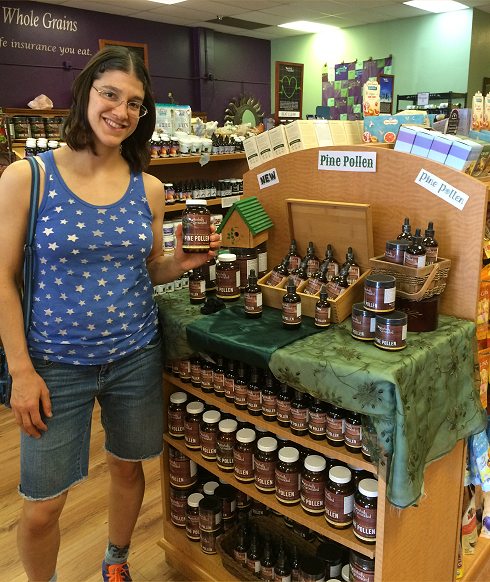 Pine Pollen is supposed to restore and rejuvenate! I’ll write more about what I got in detail later.…