Last weekend was Tuff-N-Uff’s “Pack the Mack, the largest and best amateur MMA promotion and show in the world. It’s truly an honor to be able to attend (even though this time I didn’t go out into the arena once because I was in the back), and so cool my friends and teammates get to fight there. Last year, or was it two years ago? Jamie won her belt there in front of like 18,000 people. That many come because it’s free. LOL I’m not sure how many come to a regular show, but quite a lot! This one is even more ridiculous. Thank you sponsors for enabling Tuff-N-Uff to do this.

Three of my teammates fought- Natan, Enzo, and Serena. I’m so glad Natan finally got to fight. He visits from Israel as long as his visa will let him stay. He’s a karate black belt, and the past like three times he got a fight set, people backed out or it fell through. This time he went out there, threw some awesome kicks and a standing foot sweep, defended a take-down, and guillotined the sh*t out of the guy for the tap in the first round. go Natan! Amateur debut.

Enzo went out there and battled! Such a great fight. He had such good technique but lost the decision. Sad for him, but it’s a fight he should be proud of.

Serena unfortunately got caught with a straight early on and the ref stopped the fight. My heart hurts so much for my friend. She didn’t get to show off her skill that night. But she did everything she was supposed to do. For months, well all the time, she showed up at the gym every day, twice a day, unless she was dying and I had to tell her to stop.

Worked MMA, striking, grappling even though it’s not her favorite thing but she forced herself, private mitt sessions, cardio, diet, weight cutting. She worked so hard. She suffered through the hard times. She improved a lot. She got stronger. Nothing that happened in that fight can take that away. Nothing that happened can be thought of as “a step backwards.” She took a step forwards. Many steps forward.

That’s why, even when I don’t have a fight set, I run myself ragged in practice. Sometimes I cry in the bathroom out of pain or frustration. Fight set or not. That’s because I know it will add up and make me stronger, so when the time comes, I’ll be better for it. That kind of energy and effort doesn’t just evaporate into thin air and become nothing.

We fighters know horrible things can happen in fights but we risk it anyway because the winning can illuminate our lives like a supernova. We know we can get knocked out, or maimed, or permanently damaged so we can’t fight or even function normally on a daily basis, or even die. But we do it anyway because we love MMA. Haha crazy, right? 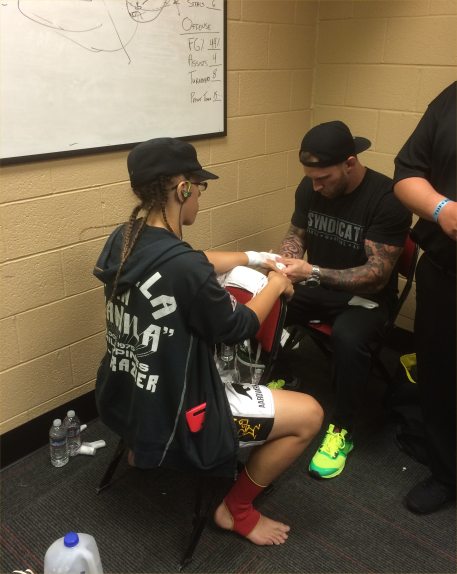 There’s nothing else I want more than to get up, eat, and go to practice every day, and then fight. I want to learn and show in the cage that I can do it. I want to be the best. I’m so fortunate to have a wonderful team and friends and coaches who understand that and who’s hearts align with mine.

I’m so proud of Serena and all my teammates who fought. I’m honored to have fans, friends, sponsors, and family who support me. I’m happy barely anyone trash talks us. When I lost fights a while ago, people didn’t say stuff like, “Oh Roxy, you suck! Get out of the cage!” Everyone around me, online, and the majority on forums! were supportive in some way.

yeah. So Friday was weigh-ins, Saturday was Tuff-N-Uff, and I spent Sunday trying to recover emotionally since I feel so connected to her. I’m still bummed but I’m so proud of everything she’s done, and can’t wait to train with her again. We have stuff to work on. Both of us.

It was nice to see some of my friends who traveled to support Serena. 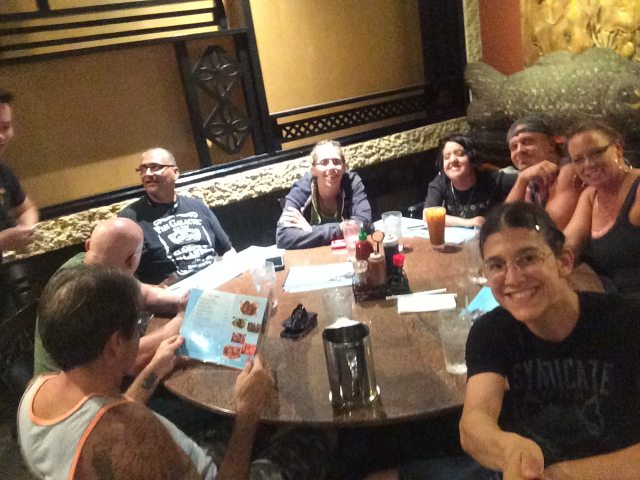 I found out I’m not fighting in July. I was super bummed out for a few days because I thought I was and I’d been preparing hard-core for it, but now I’m back mentally. I’m still enjoying every day and learning so when I get in the cage again whenever, I’ll one step closer to being the best in the world. I still feel like I lost time and I have no time to waste! …