The year was 2008. I headed to to training at Keishukai Tokyo Headquarters, located in the basement of an office building in Mizo no Kuchi. I’d just taught back to back English lessons from 8:30AM to 5:30PM, scarfed down a rice ball and fish sticks while walking to the train station. They digested as I stood for an hour and 15 minutes, holding onto the hooks hanging from the train ceiling, while reading a Wheel of Time book.

The evening breeze on my walk downhill was nice and I finally entered the dojo around 7. Our sensei, Moriyama-san and my teammate Takayo Hashi, were sitting on the mats looking through papers. I greeted them cheerfully.

“What’s that?” I asked in Japanese.
“Oh, Hashi’s Strikeforce contract arrived,” Moriyama-san said, going back to his shuffling of papers. I froze. My stomach tightened and my heart felt like it was going to burst out of my chest. I swallowed it back down. “Oh, I see,” I managed. My manager had told me that he was working on getting me a Strikeforce contract – fights with the top organization in the USA, right below the UFC. Only the UFC didn’t have women so it would be impossible to fight there. Every female was aiming for Strikeforce.

“So…nothing came for me?” I said. Moriyama-san looked at me apologetically. “I’m afraid not, I’m sorry,” he said, and said something to Hashi about some contract detail. I turned away and went into the locker room.

“Don’t feel jealous,” I ordered myself. “It’s great for her. Good for her! It’s not common for Japanese female fighters to have great opportunities outside Japan. I’m happy for her. But….we have the same manager.”

I changed, and stretched until class. I loved Keishukai. I’d been there for three years. Their grappling was such high-level and the biggest Japanese stars trained there. Their “MMA” class was really just grappling class. The teacher, maybe K-Taro, showed some technique, we drilled, and then everyone grapple-sparred. I never stayed until they end because sometimes they finished after 11 PM, which would mean me getting home around 1 AM. About 30 minutes into sparring, the teacher said that anybody who wanted to spar MMA with small gloves (starting from stand-up) could. I called out that I wanted to, and Hashi took me up on my offer. She was one of my favorite sparring partners because we were about the same size. She was a little physically stronger than me, though. We usually sparred to a draw, each occasionally getting something on the other. On a bad day for me, she beat me up. On a good day, I beat her up.

(picture unrelated to this story, but with my friend Dio, myself, and Hashi in Keishukai HQ. I usd to always train in gi pants so my knee pads wouldn’t slip off lol) 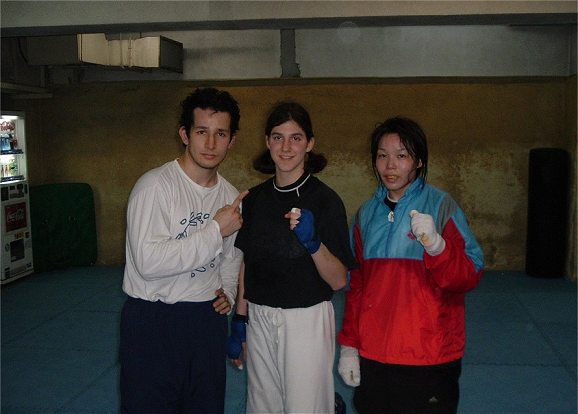 “Scramble scramble here! Use your right hand…” her mentor and my teammate Koizimu-san screamed at Hashi. He always coached her from the side. Another guy said, “Nice one!” when she landed something on me. “It’s nice to have a trainer,” I thought to myself wistfully, “somebody who takes the time to pay attention, coach you, give you advice.” Usually no one said anything to me during live sparring. “I wish someone would give me advice during live training. Anyone. Just a word. Or even ‘go Roxanne!'” If somebody had coached BOTH of us, I would have been fine with that. Was it because I was not Japanese? I’m not sure if other people got live coaching either because I wasn’t really paying attention to others, but Hashi always got coached against me. I think it’s nothing against me personally and just not Japanese style, and Hashi was special because she was friends with Koizumi-san.

I always spent a lot of mental energy trying not to be envious, and was depressed for the rest of the week about the contract. Good thing we were all friends. We were in the same weight-class, though. That’s never easy. Just equal coaching- that’s all I wanted, like what I get at syndicate now is perfect..

That’s when I decided to try and find a separate coach. Nobody really gave me guidance, I just kind of thought a pro fighter should have somebody looking after them. lol I’m not sure I have my dates right, but sometime around this time. I shared my feelings with my American friend living in Japan, Ryan Bow, who recommended his friend former Pancrase champ Kiuma Kunioku. He started holding mitts for me on a regular basis, twice a week. He was first person in my life who could motivate me to WANT to do striking, because he was cool and I wanted to impress him. hahaha 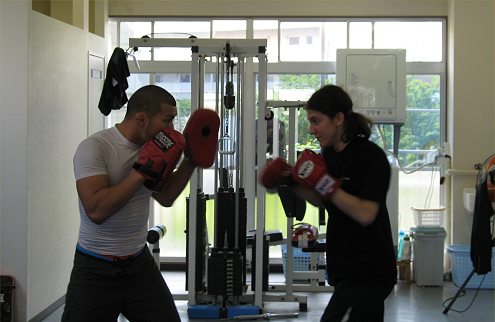 I hated striking so much.

So there’s a little excerpt from my life in Japan.

oh yeah sidenote: I ended up getting a Strikeforce offer with a week’s notice to face Marloes Coenen (rematch, I won the first time!) at 145 lbs (a weight class above me) and the winner would fight Cyborg. HAH. I ended up losing by armbar in the first round, but maybe that worked out for the best….?…