I had a great last two weeks. All my blog have been about Japan, so it’s time to move on.
When I got back, the very next day I came into the gym, tired, jet-lagged, and my body hurt so much from not having my chiropractor in Japan. It was Friday, so I hoped to do a nice technique day. No. Coach John had us do a cardio day. @_@ But it’s not as bad at Guns’s cardio Fridays! It was good. I got to train with Jessica Hoy a bit, who had joined the gym the day before I left for Invicta so I never really got to train with her before. Yay! She’s bigger than me…I want to call her “She-Ra!” Or Xena Warrior Princess or something because she’s big, beautiful, and her bicep is twice the size of mine. XD She’s awesome. (far right) 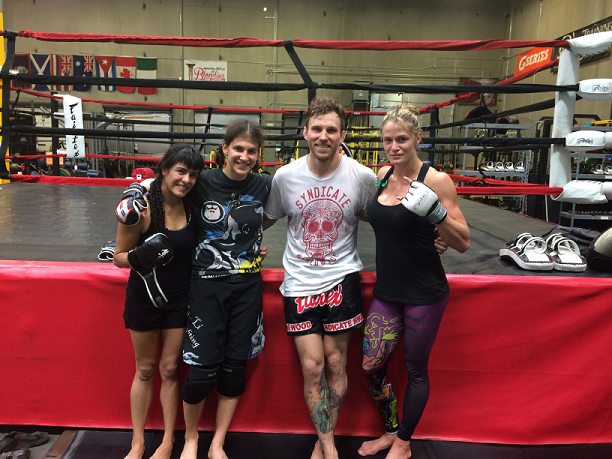 She’s 1-0 as a pro. I can’t wait to see her fight somebody and smash them. ^_^ tee hee *evil cackle* Her husband is a fighter, too. (pictured further down) I can’t wait to see him smash somebody, too.
Also, my Facebook friend Valeria “Chika Galactika” Mejia from Peru visited Syndicate to train with me. Valeria has been here for two weeks now. We’re working on stuff for her fight vs Lindsay Garbatt in Canada October 23th in Hard Knocks 46. She’s scrappy! 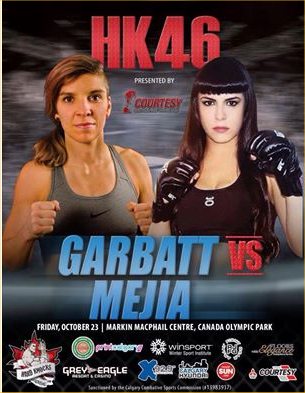 I really want to fight before the end of the year. I went to fight in Invicta! I know I fought in the last one. :/ I hate to seem selfish, but I’ve only fought twice this year. My goal is 4… which won’t happen, but one more fight would be great! I think I’ve improved myself even more since my last one, fixing my past mistakes. I feel good and ready to go!

This past Monday and Tuesday, there was a convention for the “National Association for Convenience Stores.” Booths and free samples were set up by snack foods like Hostess, Jiff, Cliffbars, energy drinks, chips, cookies, candies, etc. 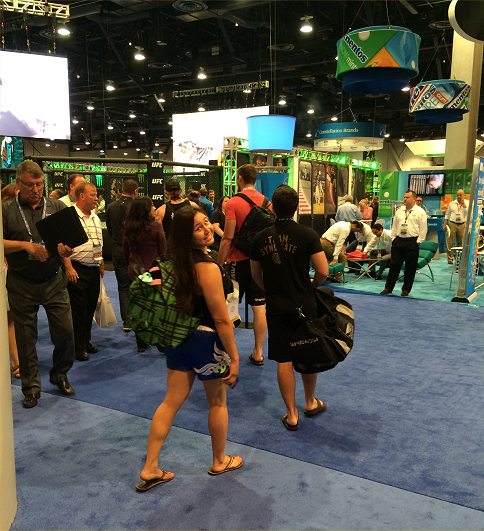 Monster Energy is into MMA so set up a cage and hired Coybow Cerrone and Rampage Jackson to sign autographs and pose for pictures for two sessions out of the afternoon.
(We got a pic!) 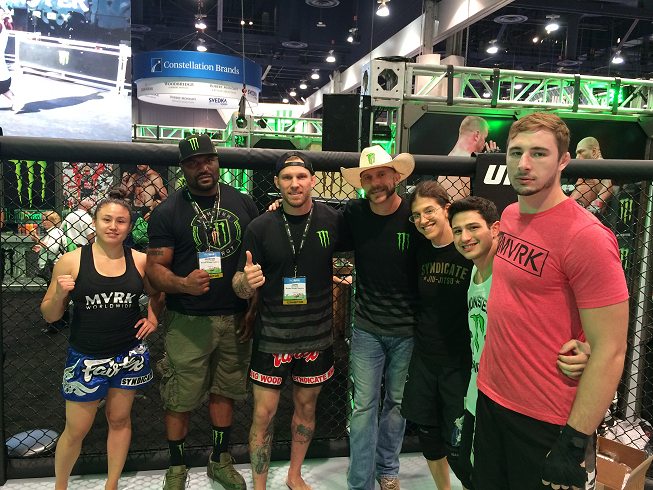 Also, they hired John to bring a team of 4 from Syndicate to show our stuff in the cage. 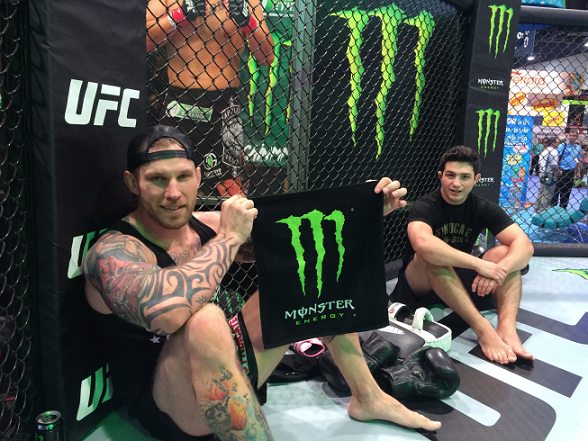 (John and Adam. John is tired from training us all all day and Adam is pumped and ready to go 10,000 more rounds LOL) 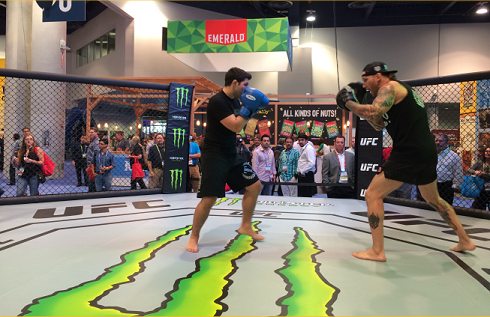 On the first day it was myself, Jamie, Adam Acquaviva, and Cory Hendricks. The second day Donny came instead of Cory. John held mitts, we grapple-sparred, Jamie and I did take-downs with her slamming me and me Judo-throwing her. (the big bangs attracted a crowd) and Jamie and I did some light kickboxing/MMA sparring. 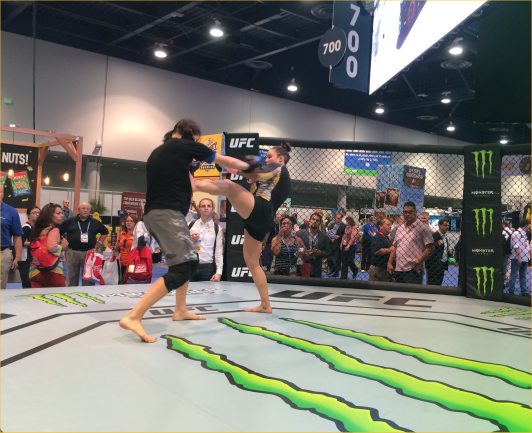 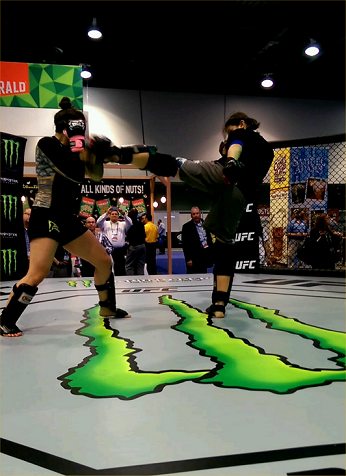 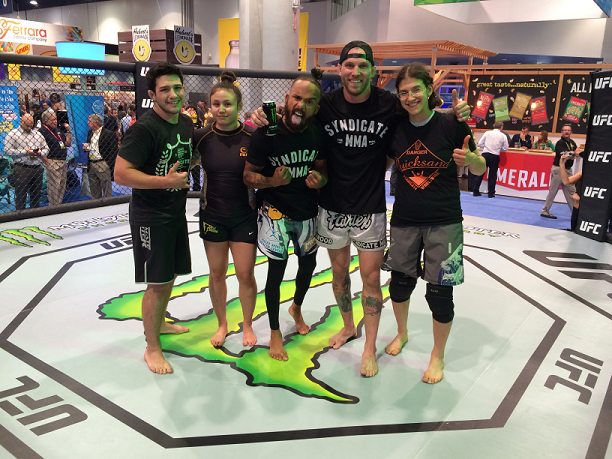 I wasn’t sure how I was going to feel afterwards, but I was tired and have bruises everywhere, so I think I got good training. lol

I got my teaching job back instructing little kid’s jiu-jitsu at Syndicate with Damien Nitkin. He’s a great teacher and I’m learning a lot about good ways to discipline a class.  I missed half of yesterday’s class because I couldn’t make it back in time for 4:00 and all of yesterday. :/ Sorry, Damien!

I ended up signing the “Free Nick Diaz” Whitehouse Petition. If 100,000 people sign it, the Whitehouse looks at the issue. It’s about Nick getting a 5 year suspension from fighting for smoking pot. Now Pot is illegal in regards to fighting. I am not going to get into an argument with people about that. Everyone has their own opinion about whether it “should” be illegal, whether it’s a performance enhancing drug or not, whether it dulls the pain or whatever. I don’t care. There is a rule and in sports, we have to follow rules. However, when someone did steroids (which is worse, nobody can argue that) and gets a year or less suspension, and then Nick does weed and gets 5 years…that’s just ridiculous. That needs to be reversed or lessened somehow. If he broke the rules, punish him, but more fairly.

AND IT REACHED 100,000 signatures! I’m glad I decided to do it last night so I can say I helped.
https://petitions.whitehouse.gov/petition/lift-nsac-ban-mma-fighter-nick-diaz

On Saturday, I hung out with my new (new-ish) training partner family, Jessica, Clayton and their three kids, all of which train at Syndicate. We watched the movie Pan. 😀 It was great! 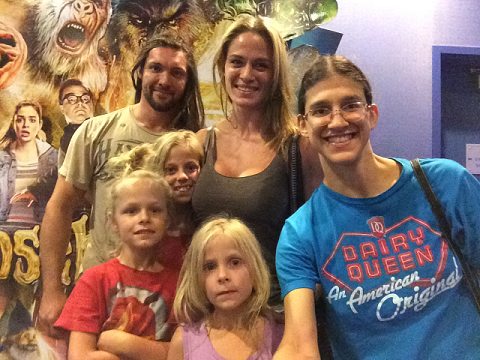 I am totally going to see the Goosebumps movie (poster in the back) once it comes out.

On Friday, I went to watch RFA with Heather Clark! <3 Thanks for getting me tickets! 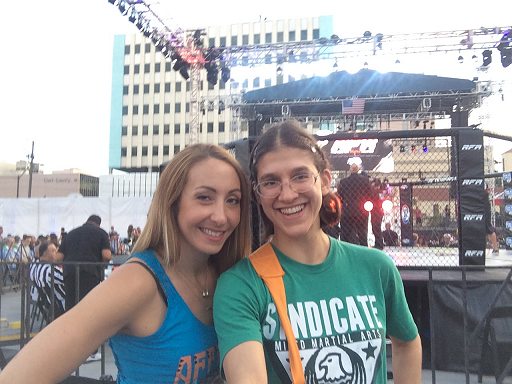 Damien let me leave the kids class early, but I got caught in traffic and it took me an HOUR to get from Syndicate to Fremont street. Omggggg *stabs something* I ended up pulling into The D Casino’s parking garage tower just as they were announcing Corey Turner. I saw a guy running over to the side of the garage to look over the edge, and I realized that the fights were outside. On the 11th floor, which was the final floor, I was praying hard and I FOUND ONE LAST SPOT. I squeezed my Toyota in there a little crooked, sprinted over to that guy figuring he had found the best vantage point, and found that it was actually my teammate Marc! lol 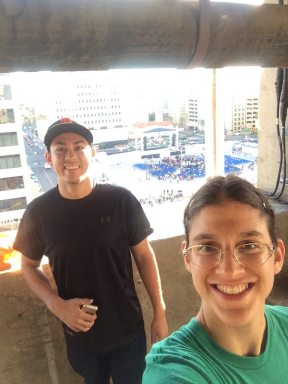 I looked down and saw……two little ants moving in a coffee-mug sized cage. “Which one’s Corey?!” I exclaimed, pulling out my phone and trying to use the zoom feature. The ants came together and one stopped moving.

“Oh!” Marc cried out. “He knocked him out!”
“What?” I almost shouted. “Who knocked who out?”
“Corey knocked the other guy out!” Marc said.
My zoom did not work. I wanted a replay! “How do you know!”
“Yeah!” Marc said, fist-pumping the air.
I wasn’t convinced but he seemed certain of what he had seen. I high-fived him and then we walked together down to the ticket window. There I met Heather and our beautiful friendship date began. Haha I didn’t really care about anybody’s fight but Cory’s and also David Archangel. (What a cool last name). He used to train at Syndicate but then moved out of State. He won! 😀 He looked great doing it! So proud of him! 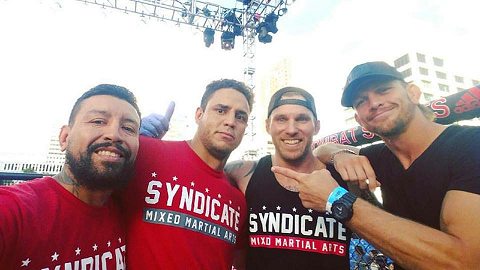 I’ve been trying to do more Gi in jiu-jitsu lately. I’ve been back to teaching in a gi. So I had gotten my purple belt in 2005 and the moved to Japan for 8 years. I think I only put my gi on like five times in that entire 8 years, so I forgot my grips, how different balance was, and different techniques that require the gi. It’s really embarrassing. :/ I mean, I’ve gotten so much better at grappling for MMA so that’s what’s most important anyway. See, there’s only so much time in the day. I’m too tired if I do double classes every day (meaning an hour and a half of gi class and then an hour and a half of hard MMA training.) So I started doing gi technique, not sparring gi, and then doing MMA. That way at least I can slowly refresh my memory. On Saturday I spar gi because there’s no MMA afterwards. 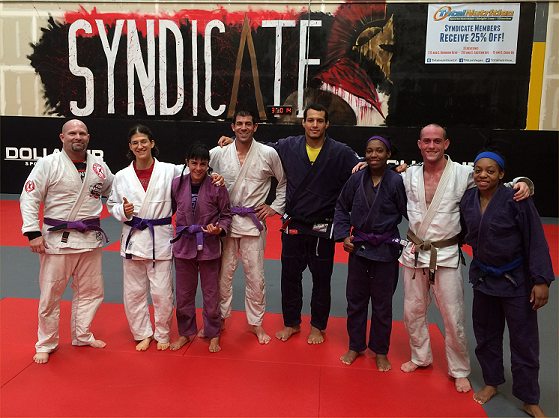 So far I’ve been doing this for two weeks and it’s working! I’m starting to feel more comfortable. 😀 And my belt is totally broken in. lol yes, it was still stiff from being unworn. ^^; And thanks for being so patient with me the other day, Casey. I got frustrated a bit. You’re such a good teacher in many different ways. *_*

I’ve been watching Once Upon A Time season 4. I love the actresses they got for the Frozen characters. They’re perfect, in both looks and mannerisms! 😀 😀 Oaken is so perfect! I had forgotten about him. I’m also watching Ushio and Tora. Love it!

On Last Sunday we had a belt test for the kids. Small test…I think it was post poned like 3 times and then settled on a Sunday, but it’s good to see kids get promoted! Since we are affiliated with Zenith, Mr. Robert Drysdale and Marcello came to help administer the test. 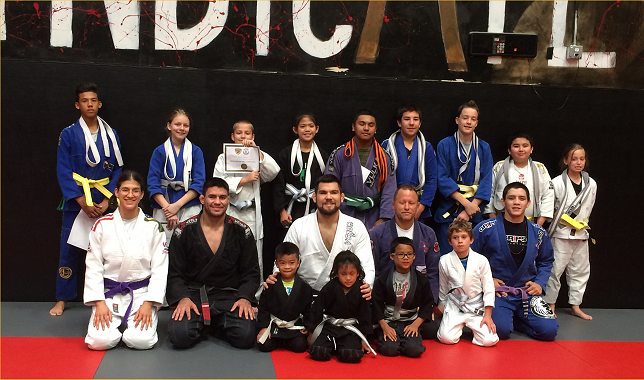 So guys, when the photographer says “one two three!” at that moment, you’re supposed to all open your eyes wide, smile, and hold it for a few seconds. LOL How many people in this pic have their eyes closed?!?

I hung out with Jamie last Thursday! We went to the Orleans Buffet thanks to two of my fans Jack and Jan who gave me free tickets! Thank you so much!!