I’m gonna write lots of details, so if you have a short attention span, just look at the pics. lol

I had to wake up at 1:15 AM on Monday Sept 21st if I wanted to have breakfast and do yoga stretching, so I went to bed at like 8 PM. I often get sleepy at that time, and in the past, when I fell asleep, I DID wake up at 1 AM naturally, so I figured it’d be no problem!

Wrong. I was so excited that I had trouble falling asleep! :O Hah! I hadn’t been like that before FIGHTS.

I set my reservation for a taxi at 3 AM. If I wanted to truly get to the airport two hours before my flight, which was at 5, I would have made the reservation for 2:45, but somehow I couldn’t bring myself to make anything for earlier than 3 AM. LOL

2:30 and no call or text. They always call or text. 2:45 nothing. 3:00 AM and no taxi. 3:05 and no taxi. Okay, I’m on a time schedule here. I start freaking out. I called the company and they said that they’d contact the driver and get back to me. 3:13 no call, no taxi. WTF I’m angry now. I called them back and told them that I need to catch my flight and if they can’t get a hold of the driver, send me another taxi ASAP. While I’m ranting, another call comes in and it’s the driver saying he’s almost there. He arrives at like 3:15 and is all lackadaisical. “You’re my first ride of the morning!” he said with a smile, and keeps me waiting while he takes notes on some notebook. I want to say, “Dude, you’re fifteen minutes late, making me 20 minutes late by the time you start driving. DRIVE.” So he drives really slowly away. I ended up telling him to start driving through yellow lights because he started slowing down WAY ahead of time. WTF dude. Then I questioned him about correct airport terminals so now he’s annoyed with me. hah serves him right.

I managed to clear security and check in and pretty much barely on time without having to run. 🙁 I’m still miffed at the taxi driver. Serves me right for wanting to get another 15 minutes of sleep? -_-)

I chose the cheapest flight which sent me to TEXAS before changing flights to go to Japan. That sucked and added an extra four hours on to my trip because I had to back track. Was it worth $200? I guess so. 17 hours total travel time. *fallsover*

The flight was alright. No movies were on that I wanted to see ! 🙁 So I finished reading “A New Spring” by Robert Jordan. RIP 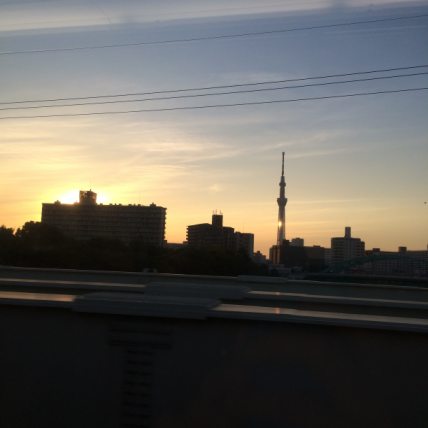 I arrived finally and took the Narita Express.

My body felt horrible for sitting for 16 hours but I endured another 2 hours on the train, and FINALLY got to Kawasaki. It felt so amazing to be back in Japan! 🙂 It didn’t really feel like a vacation, but more like visiting home. I knew all the train lines. I knew where to get what I wanted to eat. I knew the exact places in the supermarket to go and I knew what time everything closed. And thanks to me studying with Goto-san extra hard, thinking I’d do the UFC translating job, my Japanese was on point. Goto-san said that maybe I even improved?! How cool!!

I was so tired but decided to shop in Tokyu Hands near my hotel, the Toyoko Hotel.
I found stickers that cracked me up! XD 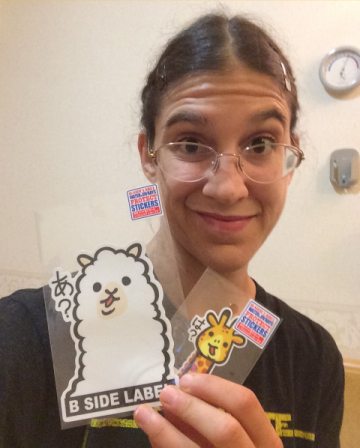 The llama is saying “Ah?” and the giraffe “Hah?” In Japanese, it’s like “Duh?” or “Whaaa?” XD Look at their expressions!!

I went to bed at like 8 PM and woke up at 1 AM. lol Much like today (October 2nd) I walked around Kawasaki at night, which isn’t the safest place in Japan, but since Japan is the safest place in the world, I think I’m alright. lol I practiced using the selfie stick that Hannah got me. 🙂 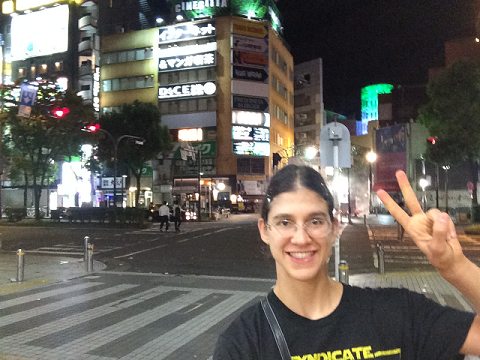 At 3 AM I went back to bed and got another hour of sleep. at 7 AM I woke up, ate again. Yay Ministop convenience store near by! I love Onigiri! I saw the movie “Attack on Titan” in the theater at 9 AM. I was SO excited! Actually, I love the anime and had hoped to plan my trip to Japan around seeing the live action movie in the theater. Then my fight got set and my trip plans got finalized after it would already be out of the theater. :/ I was sad, but then found out that they split the movie into TWO. and the SECOND one was coming out 9/15~! What amazing luck! So with the help of a friend, I found the first one online, and then got to watch the second one in Kawasaki. XD 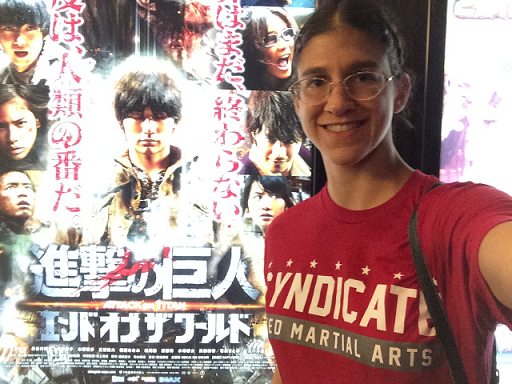 It sucked but I loved it! I mean, it was awesome if I look at it as enjoying seeing a real live enactment of my favorite series, but they changed the plot SO much and took out my favorite character completely, and changed someone’s personality! That was not cool. :/ I know most Japanese fans are really upset. OH well. They did a good job with Hanji. lol She made me laugh. And Eren was good, but not angry enough, and Armin, but I kept forgetting who he was because he didn’t have yellow hair in the movie. -_-;

I’m also so glad that there was such an early showing! It let me be able to squeeze it in amidst my other plans!

I ate ice cream and then went to Yokohama to have lunch with Lauren and Ryuji at Harvest! YAY So excited to see them again! 😀 I met them on Live Journal, actually, haha! And they taught me about how to use Periscope, something other friends had been trying to get me to do, and I never wanted to. 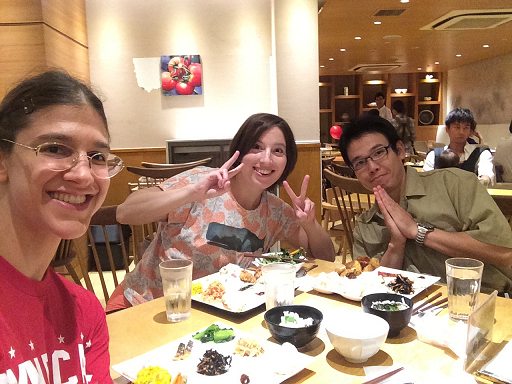 I loved the food…it was Viking style! which means buffet style in Japanese with many kinds of Japanese food. I loved everything!! and I got to eat lots of stuff that I missed!

So much fun with my new selfie stick! 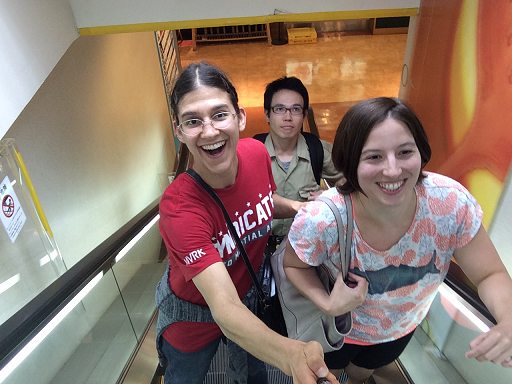 Bumped in my my co-worker Max by CHANCE! in Yokohama!! how fantastic! He had emailed me asking if I could meet, and I told him I probably wouldn’t have time….and I was sad. So it was exciting I met him. 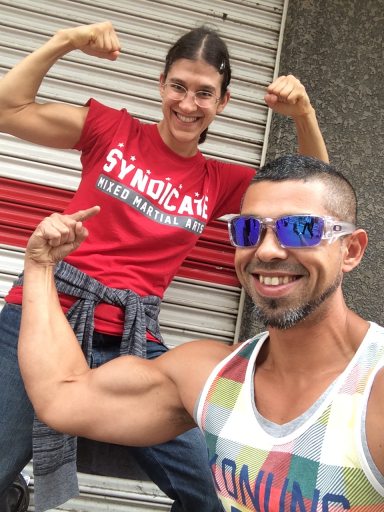 Haha him and his flexing pose! 😀
Then I went to Isami with them and got gloves for Tom.
Then I left my friends ;_; and went to Ikebukuro to meet Sakura! An old training partner from Keishukai days!!
She plotted to take me to J-world in Sunshine city, which I didn’t even know existed until I got off the train and saw an add. 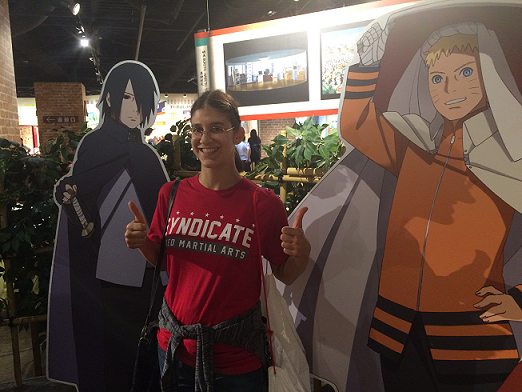 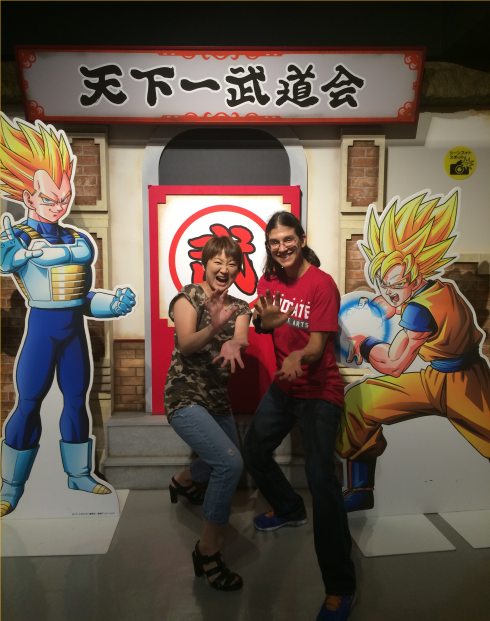 We also did the Naruto haunted forest thing where we had to shine a black-light flash light around to find arrows that lead us around, and then open boxes with snakes popping out to find a stamp to stamp our little “scrolls.” At one point, a doll jumped out at us from the wall, and then something we thought was a doll started RUNNING AFTER US. We were like “…..AAAAAAAAAAAAAAAH IT’S A PERSON!” Screamed like little girls and ran around the corner. It was still following us! We kept running! LOL and we missed finding one of the stamps, so when we got out of the haunted forest, the staff lady was like, “Sorry you failed.” and put a “FAILURE” stamp on our scrolls. LOL WHO FAILS a kid’s haunted house? XD That was hilarious. I had so much fun. hahaha Then when I stood next to Luffy’s SunnyGo ship the cannon suddenly exploded and I screamed and jumped. A bunch of Japanese girls standing right there started giggling. XD hahaha 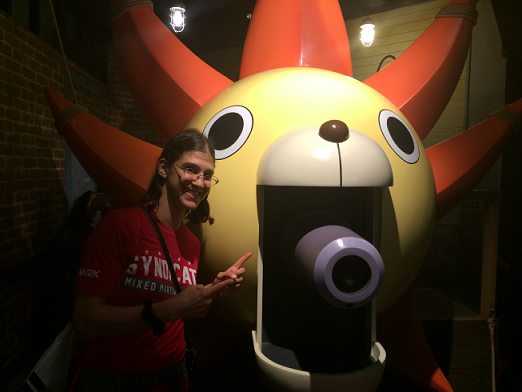