My trip to Japan was absolutely amazing. I cried when Tokyo came into sight, feeling so blessed to be in my situation, having won my fight safely, having the UFC pay for my planet ticket and hotel, doing my dream job of using Japanese on the job. Seriously? Two of my LIFE GOALS have come true with the UFC. 🙂 (doing translation work professionally and fighting in the UFC)

A car picked me up at the airport on Saturday September 13th and I got in around 6 PM. I had kurianmochi ice cream from the Family mart LOL and then used the fitness center for a bit, and then couldn’t hold it back anymore. Went to bed at 8:30 PM. Naturally I woke up at midnight, like, “YEAH! ready to go!” lol So I had some food from the convini (take no ko onigiri, peach bulgaria yogurt and salad bag lol) and walked to Shinjuku station. For me, it was morning but it was still Saturday night for everybody else. I went to the Don Quixote superstore and enjoyed browsing around. I just used the internet for the rest of the night after I got back. Couldn’t WAIT for the breakfast buffet at 6:30.

The UFC didn’t need me on Sunday so I called one of my best friends in Japan, American Brittany Decker, to hang out. We did everything. 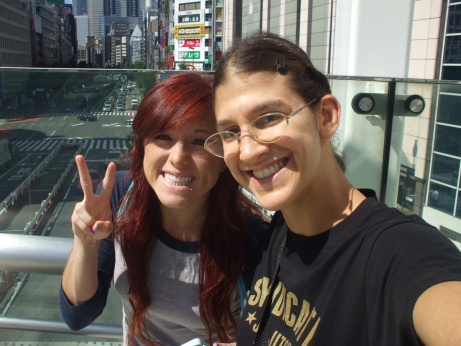 Walked around Shinjuku, shopped for a Fireball Music cd I wanted, ate weird Mexican Pizza at the Wired cafe, ate ice cream. 😀 Ate Okinawan food at Yanbaru. It was great.

Japan is intoxicating and tempting. Foreigners come over, expecting to have a year’s experience and then go home, but fall in love with it and then never want to leave. I get it! I realized my teaching career wasn’t going anywhere, but I was happy, so I didn’t want to leave. So we had a UFC meeting about car schedules, hotel rooms, fighter pickups…stuff not really related to me. I kept falling asleep and the Singaporean guy Ed had to keep nudging me. I have so much more respect for Burt and the way he organizes things.

I feel like I’ve come home. I feel like I could never left. I feel AT home. It was so good to be back. I enjoy all the things I enjoyed before, like crazy food combinations, people’s clothing, items in Don Quixote. “Ah, Japan!” I find myself saying again and again.

On Monday I went to bed at 9:30 and woke up at 1:30. Better…. lol Tuesday it was 10:00 and woke up at 3. So Monday I ate, worked out on the elliptical and lifted weights. Man, Esther Lin made a fantastic behind the scenes video of me! it showed my skills and also John lifting me up and I screamed “syndicate!”

Anyway, Monday’s work was amazing. At first, I helped one of the guys put the scale together. I also helped some of the guys do inventory on the gloves, and it was a so fun and awesome! I tried on size XXXXL gloves! For bigfoot?! 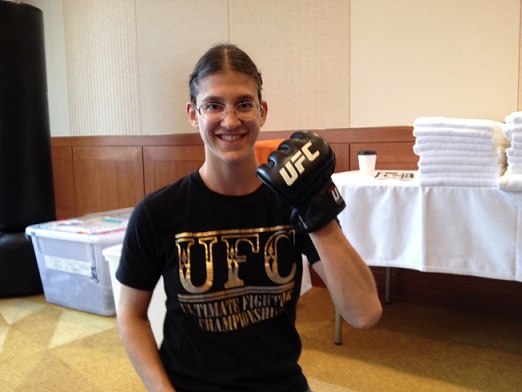 Then I and to pick out the gloves for our particular event. 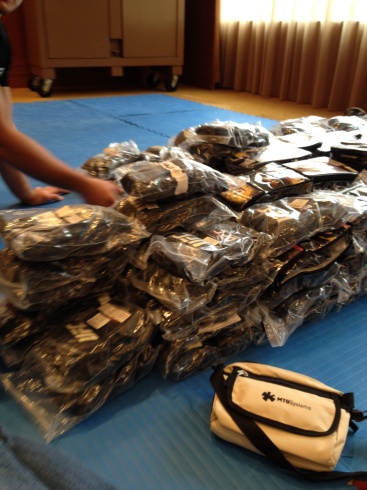 I took a few of them to Otoya. 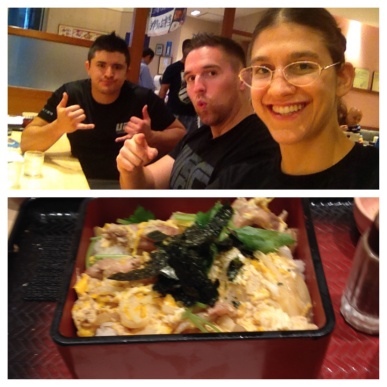 So there were counter seats…two open, some lady, and one open next to her. My colleague said, “If that lady just moves over, we can all sit down. We have a tight schedule.” I looked at the spot and gestured to it to the Ootoya staff man. He said, “Sorry, a customer is there already” and walked away. My colleague said, “He’s not going to ask her to move?” and I said, “Nope. It’s Japanese style.”

but I’m not Japanese and I was in the mood to break their dumb rules. So when he walked away, I went over to her with my hands clasped and said, “Sumimasen, onegai ga arun desu keno, sanninn de suwaritai…” (excuse me, I have a request…the three of us would like to sit down…)ONLY and she just nodded and moved over. YAY. so easy, so simple. The staff shot me an “omfg” look but it was well-contained.

After lunch, we hurried back and it was my job to take them all to Don Quixote to get like 300 bottles of water, a few hundred hand towels, pregnancy tests, printer ink (toner), latex gloves, and stuff. lol

We CLEANED them out of water. XD I told the lady I wanted 300 small bottles, and she thought I meant 300 milliliters. We cleared that up and I had the skinny staff man go downstairs with a cart and bring up five cases of water. Then we asked him to bring up another brand. We ended up getting all our water there. lol and we cleaned out the shelves, too! We bought ALL the white hand towels they had, pregnancy tests, and for the gloves, it was funny. I asked for “latex” but they didn’t understand. I was saying like, “gloves that doctors use.” She looked at me blankly and I was like “you know, to clean the blood!” or something. LOL The lady had to call like two people and finally lead me past the gardening section. um no…. but then there they were, high above! One box was open and we felt it and they weren’t stretchy enough. The staff lady was NOT happy about that being open. We wanted to open a ‘gomu’ style of gloves, but she wouldn’t, even though the box wasn’t sealed. So the supervisor came over and we convinced him to. VERY reluctantly.

I touched the corner but Ed just ripped one out! The manager freaked out and was like “OH NO NO NO NO NO TOUCH!” Ed was like “Don’t worry! we’ll buy it!” and put it on. The manager and lady freaked out! “NO TOUCH! MUST NOT!” struggling in English. lol poor staff. I felt bad for them. And grumbling under their breath. Stupid foreigners. I was apologizing in Japanese but secretly laughing my butt off.

We tried to go to the first Don Quixote to get more towels but they didn’t have it, so we headed back.

I got relieved of my duties, and I went to Tofuro with Brittany. I kind of wanted to train, but prioritized her.

Unfortunately for me, she wanted to find a coin laundry and we hiked really far and ended up not finding it. My injured right foot and left knee were totally killing me. 🙁 I regretted that so much and was cranky and exhausted. Actually a nice lady riding by on a bicycle showed us a different once! How nice of her. Bri got to watch her clothes. :/ It turns out for the best, because we ended up going there two more times! 🙂 We tried to do some resume stuff before crashing at 10 PM.

These pics are from the next day when we were in better moods. LOL 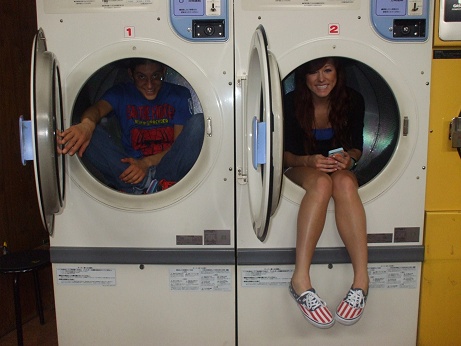 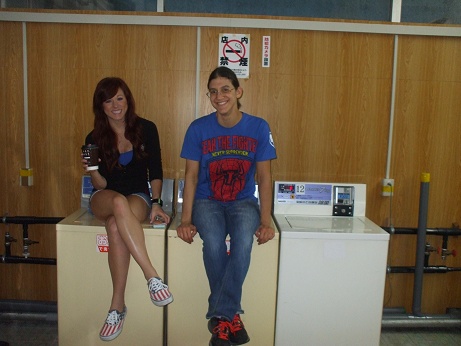