about Fullmetal Alchemist (no spoilers)

Full Metal Alchemist: Brotherhood has reached the near top of one of the most remarkable anime I’ve ever seen. And I’ve seen probably a hundred or so titles.

I just finished ep 61 yesterday. I think that makes four hours in one day. It’s like a climax now so I wanted to know what happened! But I stopped before the end. I think I have three more eps to go, which I’ll watch tonight.

The plot and premise are creative and unique. (The basic story is that humans can do ‘alchemy’ which is like scientific magic to reshape matter. Two brothers Edward and Alfonse committed a sin to try and bring back their mother who died, and because of that, lost parts of their bodies. So they are on a quest to get their bodies back. Then they get tangled up in the military and find a deep, dark secret lurking under the grounds of their country…)

The characters are very human and have human character flaws. We can relate to them. Not only does it have action and cool scenes, but the author makes lots of comments about humanity and war that I can honestly say are astute and the truth. 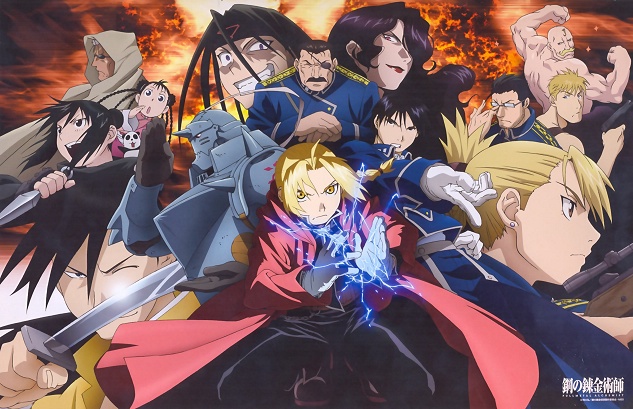 She (the author Hiromu Arakawa) manages to make stuff super creepy as hell, like eyeballs opening in the ground, mouths opening sideways on the head, zombies, monsters with heads oozing out of them and each other… It really leaves a lasting impression. 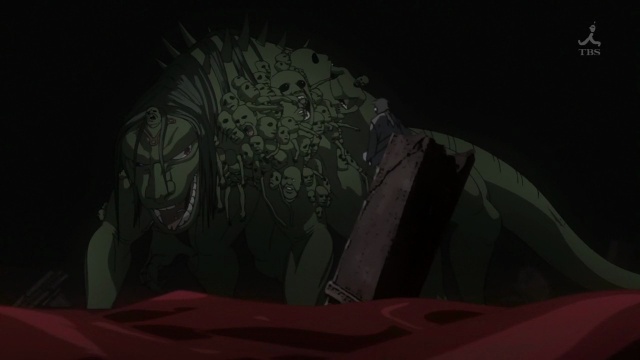 I want to throw up every time I see this guy.

And then the author has characters say stuff like, “Right now, the only thing in my mind is the fact that I’ll fight to the death with you. Social status, career, origin, race, gender, name, none of that matters.”

Good guy said something about not wanting to watch someone suffer.
Bad guy replied, “You know how humans love to watch other people suffer while making fools of themselves. I mean, why else would you constantly be at war with each other?”

Really, how absurd is war, really? When our gods in all religious (ALL RELIGIONS) tell us to love each other? wtf are we doing?

I’ve felt so many emotions in this series, starting from Professor Tucker…I thought that scene was bad! Then plot twists, people dying, not dying, people not being who they appear, characters having change of hearts……that lady stopping that guy from doing that thing. Man, he had scary eyes. and she thought the same thing. And my own thoughts surprised me. Like, when a good guy was fighting this bad guy, I found myself thinking, “That’s right, blast the sht out of that m-fcker! Blow’em to ashes!” Then “omg did I just think that?” Usually I’m all about mercy.

I HATE IT when the show takes the audience for a fool. When I’m yelling at the screen, “YOU IDIOT, it’s SO OBVIOUS to JUST DO THAT.” Fullmetal Alchemist Brotherhood does NOT do that. I’m sitting there watching, thinking, “Omg what on earth are they going to do? What SHOULD they do? If it was me, I would have NO IDEA what I should do!” Especially when it comes to moral choices. like, damn!

I got so many End of Eva flashbacks. I didn’t think anyone could recreate the genius of Ano, but Hiromu Arakawa did.

I just googled her and found this:
http://fma.wikia.com/wiki/Hiromu_Arakawa

“For the Equivalent Exchange concept, she was inspired by the work of her parents who had a farm in Hokkaidō and always had to give all their effort in order to earn the money to eat.

“Arakawa wanted to integrate social problems into the story. She gathered information watching news programs and talking to people, such as refugees, war veterans and former yakuza.”

(note: they made a 25 ep series called “Fullmetal Alchemist” in 2003? that veered off from the manga, and then in 2008? “Fullmetal Alchemist Brotherhood” which is 64 eps and follows the manga exactly. In Japanese it’s called “Hagaren no renkinjitsushi FULL METAL ALCHEMIST.” But in English they added “brotherhood” because it would sound goofy to say “fullmetal alchemist fullmetal alchemist” twice.)
Here’s the opening with theme song for anyone interested.
…