I tend to not write a lot when I’m injured or upset or bummed out. :/ I’ve been really down and bummed out over not having a fight lined up. I know I’m signed with Invicta and they were doing their best to settle things. But there’s no date. When I’m being beaten down in practice, and having to drag myself to the chiropractor three times a week, it’s nice to know there’s a meaning to it all. Before when I was working in Japan, I thought, “Well, at least I’m making money and I’m still young.” Well now I’m neither. 🙁

I don’t want to complain, or give anyone a hard time, and be all negative, so as a result, I didn’t write a blog for two weeks. Thanks to Serena, who I go everywhere with nowadays, for putting up with my crankiness.

Congratulations to Invicta for making the deal with UFC fight pass. ^_^v

I’ve heard a lot of opinions and feelings about it, from “Partnership with the UFC is the best thing possible!” to “The UFC is gonna swallow Invicta!” to “Damn, I don’t want to get fight pass!”

I do not have enough information and behind-the-scenes knowledge of the business and numbers being crunched and revenue being generated to say whether it’s good or bad. Do YOU? All I know is that Shannon the Prez is excited and went through with it, so I support her. I really want to fight as soon as possible.

Also my head coach was away for the past two weeks, and my motivation for doing striking got dropped and smashed like a wrestler suplexing someone. Which really shouldn’t be the case, but honestly, I don’t like striking. I don’t like hitting people. It’s just not fun to me. Fun for me = wrapping my boney arms around someone’s neck and squeezing until they drift easily and painlessly away into the bright starry world of unconsciousness….. 😀 Chokes FTW!!

So after I retire from MMA someday I will just do BJJ. But now, I want to keep doing MMA, so I gotta strike.

A week ago, I did the Monday MMA class, felt worn out, so I just did Brazilian Jiu-jitsu for the rest of the week. AND IT WAS FREAKING FUN!! oh man, I loved it! 😀 😀 😀 Vinny and I think Casey taught various classes. I’m getting my gi sense back. I hadn’t really done gi in the 8 years I lived in Japan, so when I put it on recently, I kept getting thrown and swept and I forgot my grips. Depressing…. ;_; I’m getting my balance and grips back. Happy about that. 😀 I want to be a black belt someday, but I’m having trouble adding gi practices into my schedule, while doing MMA. :/

For some reason, my arms gained muscle mass. I’m not sure why? I’m not lifting! Unless you count lifting the heavy muscular fighter guys I train with every day. And I thought I had been getting enough protein before, but maybe because I’m making sure I get a lot of fat for breakfast, so my body is not burning the protein that I ate for breakfast? And I’m eating a low carb high protein dinner? hmm whatever the reason, I’m glad. 😀

I’m still stressing about 125lbs. :/ I can get there, I just want to keep my strength this time. I’m at 135 after practice (drinking during practice). My body fat is going down, so my period stopped again. It’s been two and a half months since my last one. (no, I’m not pregnant.) If I go below 137, it stops. I hadn’t had it for 7 years! It came back after I went up to 145! so I was like ‘whew my reproductive system still works!” and now it’s gone. Yay? ._. Well, I don’t want kids at the moment anyway… I’m getting all the maternal instinct fix I need by taking care of other people’s kids in jiu-jitsu class. lol

Jamie Moyle won her Tuff-Nuff fight, a belt, and an Invicta contract forwhenevertheyhaveashow!!!! 😀 😀 YAY I’m soooo proud of her! 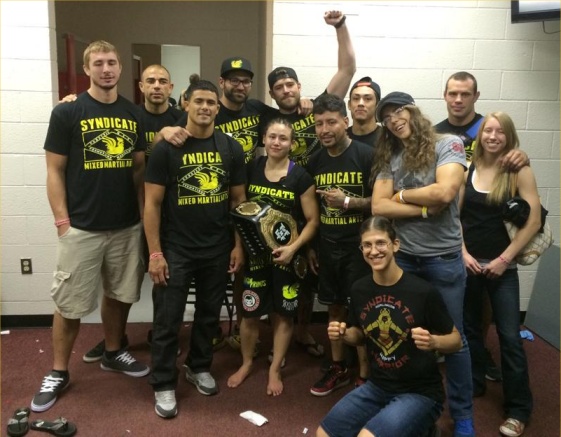 We trained for a long time, and she deserves it. It was so awesome to see her dominate her opponent, because frankly, she gives me a lot of trouble in the gym, and I’m like, “Damn, she needs to stop being an amateur and go pro or I’ll feel bad about myself.” hahaha Congratulations, girl!
You did everything we worked on!

I love my new Intimidation Clothing “Spartan” T shirts so much. They crack me up so much. I love joking around screaming “Spartaaaaaaaaa!” and taking goofy pictures. XD Intimidation Clothing is my sponsor. I should do some kind of contest. If nobody buys their stuff despite me advertizing for them, then there’s no point in the sponsor giving me money and products. 🙁 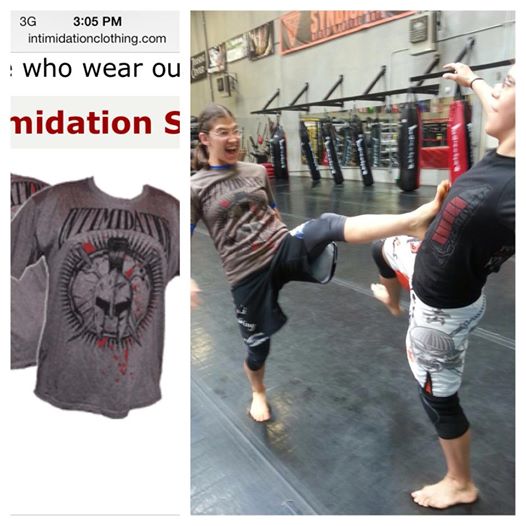 Serena gets on my case for not knowing all this anime that she knows. Dude, when I was in high school and college, I watched SO many anime titles, some I’m sure she’s never heard of. I used to keep a list, but when I went over fifty, I stopped writing them down. I’ve been watching Bleach hard-core now.

“kakugo” – determination. ii me wo shite-iru. I like the look in his eyes in this picture. Amazing how they draw it and communicate it.

I figured out the filler episodes and just skipped them, so the story is so much better now. I’ve watched eps 15 through 296 in three months. That’s like…years and years of Bleach. lol I think I’m doing pretty good on the anime front. It’s what I do after I get home from training to relax.

And I decided to memorize “Shoujo S” by Scandal. It really tickled my fancy, and I’ve 80% memorized the Japanese! Hah it started with me liking it because it’s the 10th Opening theme song to Bleach, and I liked how they presented all the characters. Then, holy crap, it had Orihime and Rukia dancing sexily, and they would never really do that because of their characters. Then because I kept watching the opening before the anime, I decided to memorize it. 😀

John came back! 😀 YAY WELCOME BACK!!!! ;_____; I was all motivated to go to kickboxing sparring this week again.

I’m glad we practiced elbows yesterday. I have been trying to take advantage of the fact that Serena is a Muay Thai girl and likes them, so I fit us with elbow pads and we practice. 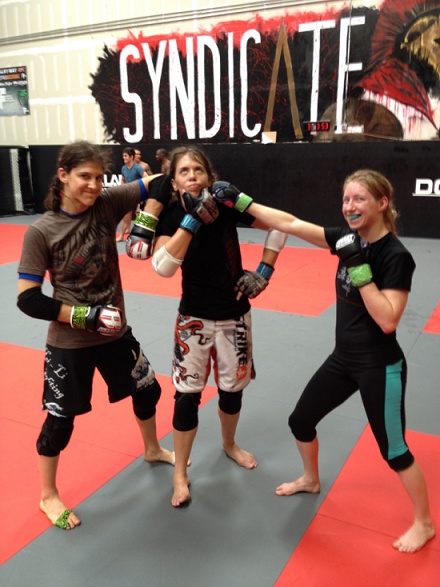 The Syndicate Kids had a fundraiser to raise money to travel to the Kids BJJ World tournament in California next month. I went and gladly ate ice cream for their cause. XD I got a ‘regular cone,’ which was the smallest size, but it was still HUGE, so I got an extra cup and chopped half into there and gave it to one of the kids, who was extremely happy about this surprise development.

Speaking of awesome kids, yesterday there were ONLY upper belts in my little kids class. DUDE. So we played Sumo, and Leilani was LAUNCHING people and winning with Tai-otoshi. So I decided to make the class tai-otoshi day. (link to the youtube vid showing the throw)(Tai-otoshi means “body drop.” I just learned that just now by looking up the kanji. Fascinating!) Most of the kids got it, and tried hard! I was so excited!! Josh couldn’t do it, and couldn’t do it, and then flipped his opponent at the very last second and she went flying. XD I was like “YEAHHHHHHHHH!” and had to make an effort to calm down so the girl wouldn’t feel bad. 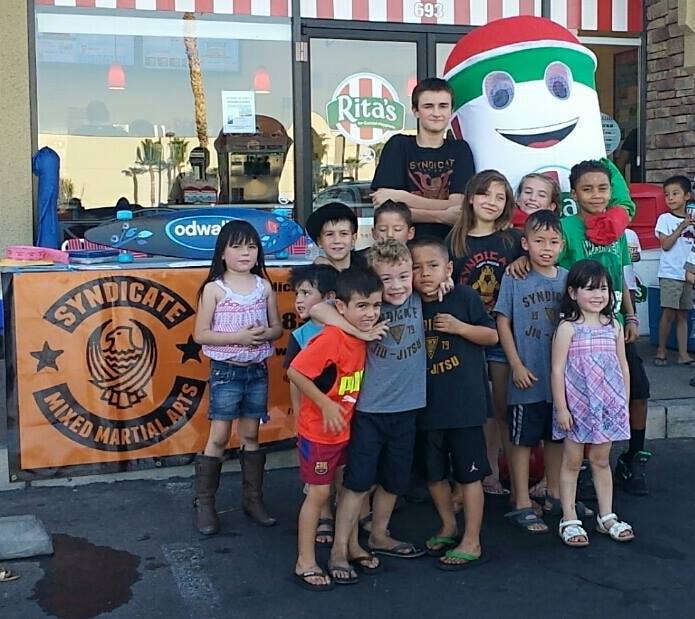 and here’s my ninja technique for JIU-JITSU!!
…