hahahahaha I’m being sarcastic. It’s hilarious how everyone is freaking out, but you know what, I’m glad. It used to be annoying to me, that I’d been fighting for so long, and then she comes along and represents all female fighters. But the more attention paid to female fighters, the better. And she’s tough and a good person, so great, right?

Fighting MMA is like surviving in the jungle. You can’t just be a good fighter. You have to win and be exciting, because of the mandatory mix and balance of entertainment/sports. People have to WANT TO WATCH YOU. I think I’m going to write an article about this topic or something, because it interests me greatly. In the light of Jake Shields getting cut, despite having a great winning record and one loss, but people saying he’s boring to watch. It’s brutal for an athlete WHO IS WINNING. But if you use that rule, I shouldn’t have gotten released from the UFC after TUF because people support me and want to see me fight, despite my recent losses.

So my week has been okay. I did Pilates on Monday for the first time, and…. it wasn’t so good because the areas that we worked out were where I was already SUPER sore from training, so I suffered. ._. But I’ll give it another try.

My back pain is the least it’s been in literally a full year, thanks to VEGAS HOT! Yoga Studios, and of course, my awesome chiropractor, Jake Steckel, who’s been telling me to do some of the same stuff I’ve been doing in Yoga classes. XD

My sponsor HerbalPapaya is having a contest and you can win some of my stuff! Buy anything from the site using my coupon code and be entered. 🙂
click here for website and contest rules
Win a signed fan and trading card!

Worked some stuff with John on mitts on Monday, and did it like CRAZY in sparring yesterday. So excited. XD #saiyanmode

AND BRITTANY GAVE ME THE BEST T-SHIRT EVERRRRRRRRRRRR! 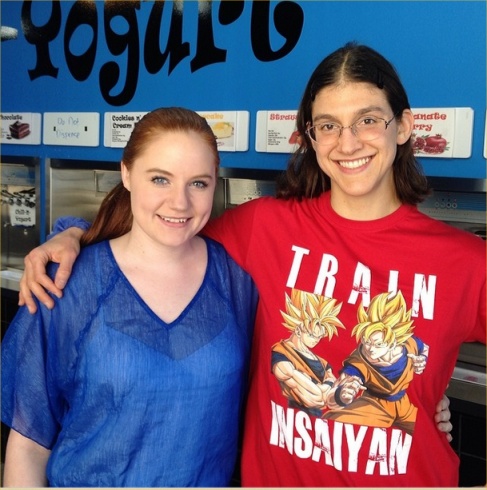