I have a new sponsor! 😀
They are called “Herbal Papaya” and produce products, like extracts and teas, using papaya leaves:
“Papaya fruit and leaves are filled with nutrients providing your daily allowance of Vitamin C, and are a great source of beta-carotene, an important antioxidant that helps fight free radicals, the beginning of disease. Papayas also supply about 2 percent of your RDA for iron, and 4 percent of your daily calcium allowance. It’s also an excellent source of Vitamin A, Vitamin E, Folic Acid, Potassium, Copper, Phosphorus, Iron and Fiber. A wonderful attribute of papaya is papain – a powerful protein-digesting enzyme – found in the fruit as well as leaves. Papain’s action resembles that of two well-known digestive enzymes in the human stomach – pepsin and trypsin, and is a large part of what makes Papaya special.”

(okay I copy-pasted that)

I had no idea about all that until they introduced themselves to me. They sent me samples and it’s pretty good! Check it out!
(click to enlarge)

This week of training has been hard since various injuries have been bothering me.

But I did some good stuff in practice. John taught me great set-ups for some of my favorite moves that I haven’t been able to hit lately. I tried them out on Tuesday. I got one! And couldn’t get the other. But I got rocked by somebody, who very kindly later explained how he did it.
My nose got bruised and cut and my glasses ALMOST covered it, but my mom still noticed. Oh well.

I love my team. 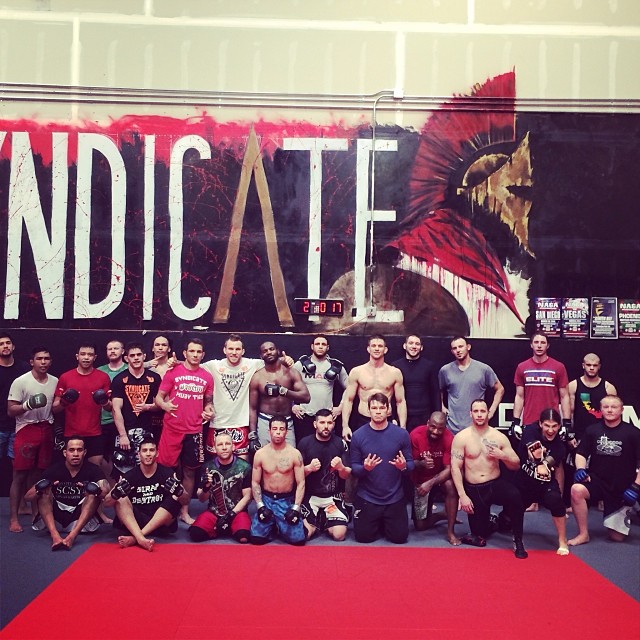 In the evening, I worked with Norm, our Strength and Conditioning coach. Everything was awesome, except I strained my already strained right arm worse. ~_~; I shouldn’t have done curls and some other stuff. Now it’s shooting pain without me even doing anything. *sigh*
so stupid. I’m not really worried about that one, though.

On Wednesday I learned more, and then on Thursday in live hard sparring I did two of the ninja moves that I’d been working! 😀 yay. I have MORE cuts and bruises on my face, though. -_- I wanna wear my Tussle shirt “I’m not abused, I’m an MMA fighter” but it’s a T shirt and it’s too cold to wear it out. lol

I dog-sat Heather’s dog one night, and hung out with her a lot other times. I <3 my friend. She got me these hot socks. XD 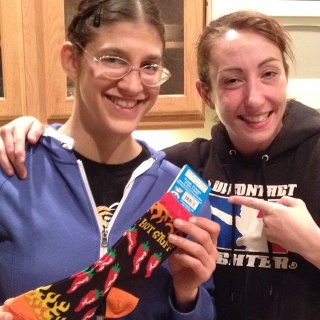 I had a smoothie with Miesha the other day! That was nice. I gave her socks. XD
(click to enlarge)

On Saturday, I did light training and then went to support our team at Drysdale’s jiu-jitsu competition. I couldn’t watch everyone. Our kids did pretty well! 😀 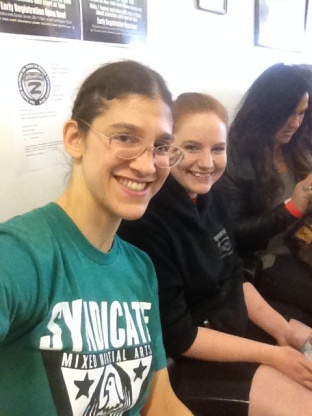 She’s a black belt in other martial arts, but beginner at jiu-jitsu/ grappling. She will disagree, but I thought she did very well. It takes a really long time to figure out what the hell to do in grappling. Especially in her first match, she had a kimura attempt, and an arm bar attempt.

(after I snapped this pic, Brittany forced the arm up the back. I dunno how the other girl got out) 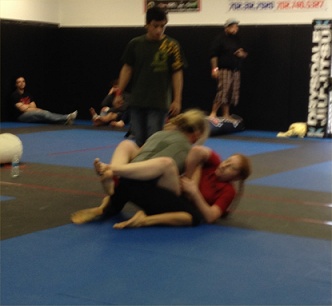 The other girl couldn’t really pass for most of the fight, but near the end, did and got a good rear-naked attempt, which Brittany defended. I actually thought Brittany would get the decision but she didn’t. grrr ~_~; It was close, though. But it’s in a fighter’s nature to be hard on ourselves.

Anyway, that’s why we come back with a fire and improve ourselves, right?

I watched the UFC at my coach John’s house! It was so much fun! 😀 Thanks for having me!
And on Sunday, I went back and watched the Superbowl there.
And I learned several very useful things, such as why to not throw dog poop into the human toilet, and also various names for unusual musical instruments. 😉…