My coaches have always said “listen to your body,” and I joke back with “But I don’t like what it’s saying!” Actually, I think the body is more like a slave. You whip it and force it to work for you, but you have to be sure you don’t kill it or injure it, or it won’t work. ._. Is that morbid? It’s true, though!!!

I moved into my new place on Tuesday! After I got stiches. -_-; Don’t tell my parents, K? But the move went well!

So on Wednesday, I did conditioning, but my legs were still a little sore from going up and down three flights of stairs over and over. And I hurt another body part, which is really annoying, because now I can’t do half of the conditioning I was going to. *sigh* Since I quit my job, I can’t even go do that to be productive and make money. :/

I’ve been spending a lot of time replying to emails and social media, which is fine! Except I moved and I don’t have internet in my home, so I have to sit at the pool, which has free wifi. Hah . But it’s so humid in here, and I can’t use Skype because it echos loudly. I can’t practice Japanese with my friends on Skype, either. -_- GRAR! frustrating.

Well, I’m really touched when people tweet encouraging nice things to me. I can’t reply to everyone, so I want to thank you here! 🙂 I sometimes take screen shots and save them, for when I get bummed out.

Wednesday after training, I located and went to like every thrift shop/goodwill/salvation army around here, looking for used furniture, namely book shelves and bureaus. No luck!

Then a lovely fan randomly Paypal-ed me cash to buy them! YAY SPONSORSHIP BOOKSHELF AND BUREAU! How exciting! And unexpected. I got new ones- one from Walmart, and the bureau from Home Depot. Haha Thank you! Rock on!

I did my usual chat in my chatroom after The Ultimate Fighter on Wednesday! That was fun. People are becoming regulars, and I’m enjoying getting to know fans and make friends!

Then a security guard walked by the gated pool. Yay my apartment complex has security! He was super nice and chatted with me, saying how safe the area was, and if I have any problems, don’t worry, he’s all over it! 🙂 I liked him. I wonder if he kept reassuring me because he thought I was abused because I have a black eye and stitches. hahaha I abuse myself. But he kept talking to me, and everyone in the chat room was like “Where did she go?” ;_; lol And then he asked what room I was living in, and I was like “whoa whoa…..that information is top secret!” and he said, “Well I’ll probably see you going in or out sometime in my rounds! hahaha”

Yesterday, I met Norm, our strength and conditioning coach at Syndicate. He taught me a bunch of exercises to do. I’m going to do them! 😀 How exciting. :< I was nervous doing his "class" because I'm not experienced doing them. I did a few times in the TUF house, but hurt stuff so ended up not doing a lot of what everyone else was doing. But now I can do them alone with nobody watching, so I won't feel performance anxiety. 🙁 I wanna sparrrrrrrrrrrrrrrrrrrrrrrrrrrrrrrrrrrrrrrrrrrrrr. I learned a new Super Samurai punch, and I wanna use it on Heather! :F Jacob Steckel fixed me up yesterday so I can lift my arms again.... unbelievable! If anybody in Vegas needs a chiropractor, for sports or otherwise, seriously, hit me up and I'll hook you up. He doesn't do the cracking scary stuff. basilisk875(at)yahoo.com is my email address. Yesterday I went to TuffNUff, the amateur promotion, to support two of our guys, Sean and Shaine, fighting! They both did great! Sean's face was freaking SCARY when he was fighting, and then veins were popping out of his arms. The other guy didn't have a chance, but he never gave up. Props to him. And Shaine was so much better than his opponent, but had trouble finishing. That's why I never like to call fights. You seriously can have someone so much more skilled and win, or a less-skilled guy get lucky.... I guess that's why betting on MMA is popular. I just root for my friends and teammates. 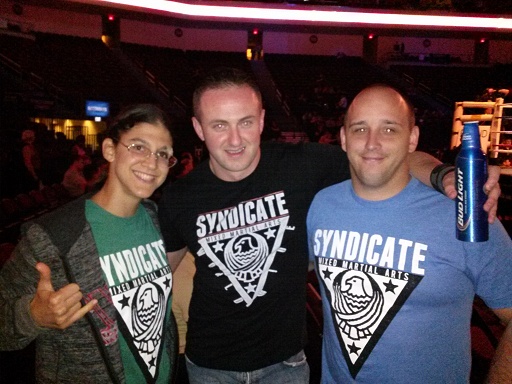