On Friday, I went to morning training and it was just Katsumura-san and I. I got kind of a private lesson! He brushed up my striking technique, that he’d taught me in the past.

It was great. He held mitts for me and I did the technique a billion times.

I’m so grateful for his kindness. I really look up to Katsumura-san. He played a big role in me getting my confidence back in myself and continuing fighting. And I’m so proud of his English. I’ve been teaching him English for the past year and a half, and he’s really come a long way. He has done ALL of his homework and studied A LOT at home. As a result, now he can converse pretty well with foreign gym members, and explain moves in English!

So we both gave each other a skill. Beautiful trade.

I worked in the afternoon, and decided not to go to evening training because my back hurt. Instead, I went to the chiropractor, and Hamazaki san pressed on my back harder than I ever had in my life. I was like shouting in pain, and I tapped, and he was like “Oh sorry, I didn’t see you tap!” LIAR!!!! ;_; I thought I was going to pass out, but when I left, I felt great.

I’m so confused by that- Mihara-san said that you’re not supposed to do stuff until it hurts, but in the States, I got treatment like that, and then this guy did the same thing. 🙁 I don’t get it…. and then he pushed on the painful knot in my foot SO HARD, I was like ‘I GIVE UP!” and he said, “HUH? What? I can’t hear you? HAHAHAHA” ‘__’ Like he enjoys causing pain. haha I felt golden when I left there, though.

Saturday was my last Saturday at work! :O I almost cried with my 11 year old student gave me a little present and a thank you note. ;_;

After work, I met my former trainer/coach Kiuma Kunioku. We trained together every day for 2 years, a few years ago before I entered Groundslam. He took me out to the Japanese Sizzler in Sakuragi-cho! I had noticed there was a Sizzler, but I’d never gone there before today! It was FANTASTIC!

We reminisced about training and him cornering me all over the world, talked about the future- both of our futures in fighting, etc etc. I wish him the best of luck in his own career!

As we were parting ways, he put his hand on my shoulder and said good luck…..I literally had to hurry away because I started crying. ;_; It might not be the last time we’ll meet, but it seems like it…. 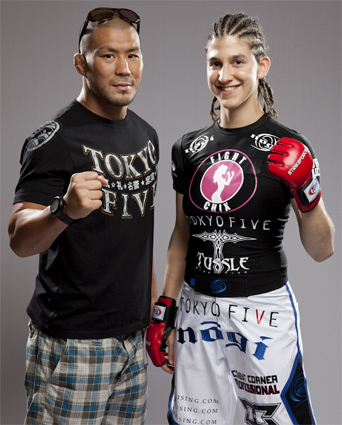