I trained really hard on Monday, both morning and evening. I had my physical therapist treatment in the late afternoon. I got frustrated in evening practice a lot. It was a hard day, but a good day.

On Tuesday, I worked at my day care in the morning and at my office in the evening.

After my day care, I met my friend Zuyo! 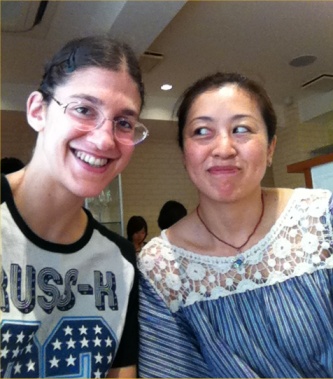 I first met her in 2003, when I came to Japan as a study-abroad student. We did jiu-jitsu together at Cross Point kichijouji, and now she’s a head instructor at Triforce gym in Gotanda! She married the owner! Lol wow! FREAKING SWEET. XD It was SO cool to see her again. I feel bad that we haven’t gotten together ONCE since I came to Japan to work, 8 years ago. It was cool because my Japanese is so much better than before. I could barely understand her before, but now we’re having normal conversations. Hah I love her. 🙂

I visited her dojo!
She showed me this guy’s gi pants, and he sewed a ‘poop’ patch onto the butt. hahah…..gross. u_u Japanese have a ….different….sense of humor…. 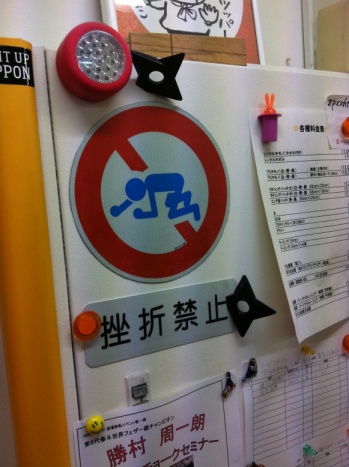 During the day, I did lots of chores. My main objective was to get rid of my broken laptop.
Step 1) Call the large garbage disposal company, which stops by my apartment to pick up stuff bigger than 30 centimeters long. You have to stick a 200 yen sticker on it, bought at the convenience store, to throw it away. Anything bigger than 60 centimeters costs 500 yen (5 bucks). I’ve been doing that for my stuff (VCR, plastic shelves) and some people take them away. What a waste of 5 bucks. I’ve probably paid over 20 dollars just to throw stuff away. It’s so annoying.

Anyway, they said the couldn’t take a laptop. There’s a law that says I have to contact the maker (Toshiba) and arrange to send it in to be properly recycled.

SCREW THAT. As I just said, it’s been soooo ridiculous to throw stuff away. I’m paying all this money. I paid $70 dollars to THROW AWAY MY TV. I am NOT spending the time trying to find packaging and the money to mail away my laptop. I consider myself a good citizen who ALWAYS follows the rules, but I decided to just remove the harddrive and throw it in the trash.

But I felt soooo bad. 🙁 Somebody would have to deal with it when they found it. See, I’m too considerate. ~_~; aaaaaarg. So I gave it one last chance, and went to this electronics shop, who’s name I’m not gonna mention so the staff doesn’t get in trouble, and asked if they handle laptop disposal. They said yes, they did! 😀 If I paid 1,500 yen (15 dollars). WEEEE fine. I can handle $15 dollars to appease my conscious.

So yesterday after work, I brought my laptop there. He said he couldn’t take it! Because I had personally removed the harddrive, and they said that they have to do it. WHAT?! I was like “WTF just take my damn laptoppppp!” He said there’s some rule that they have to destroy it.

I was getting ready to just pitch it in the trash and storm out of there, when he said, “Well….I guess I can take it and we can ‘pretend’ that I’ve already destroyed the harddrive.’

OMFG YAAAAY. So I paid my cash and forked over the sad, gutted, machine, and went on my way. It was really sad- that laptop has been my best friend for many years, and it’s reduced to this state and this unfortunate situation. 🙁 I would have liked to mourn and give it a proper burial. Of some sorts. ~_~;

In my last lesson of the day, the student didn’t want to do the book, but wanted to talk about manga and anime the whole time. YAY. He said that One Piece has broken the record for selling the most comics in all of Japan, including Dragon Ball Z. However, he said that Dragon Ball will always be more legendary because so many of the current manga artists were influenced by Akira Toriyama (the DB author). He said that when Goku went Super Saiyan, all of Japan went crazy. People didn’t say “Good morning” as a greeting the next day after it showed on TV, but instead, “Hey, did you see Dragon Ballz?!” I said, “What about when (so and so) died in Enis Lobby? I remember people making a big deal out of that.” My student said, “yes….and I was very surprised. I almost cried. But it was on a different level than Goku.”

I don’t agree. I heard a LOT of reactions when so and so died in One Piece. :/ But he’s Japanese, and I wasn’t watching the show live- I was waiting for fansubs- so maybe he’s right. He also said he HATED the new Dragon Ball movie. I liked it. :< It was interesting to hear his perspective. …