I’m a details kind of girl

Last night, I was at my dojo Groundslam, and Taneichi-san offered to hold mitts for me. He is super cool, and is 5 times better at holding mitts than I am. *_* He didn’t just go through the motions, but corrected my technique and TAUGHT ME this kick. And the way to do it kind of blew my mind, because I’d actually never seen it before.

And I thought I’ve seen all kicks (not being able to do them all, of course). I was trying to figure out the balance of it, and at one point he said that I have to figure certain things out for myself….

That’s a good example of what doesn’t work for me. This used to happen in the past with other gyms, where the teacher said, “Just try and see.”

No. I need to know exactly what percentage of weight should be on which foot, and how many centimeters high I should lift my arms, and which muscles should contract at the exact moment to make the motion for exactly how many moments. I’m a details kind of girl. It’s like programing a computer. You have to give me exact instructions so I knew exactly what to do, otherwise I can’t do it. You can’t just write sloppy script and HTLM and figure the computer can figure out what you mean. And I feel dumb when other people get it faster with less.

In the end, I harassed him after sparring and got all my details, but it took all class. Hahaha I’m very excited to practice my new PowerKick. 🙂 THANK YOU, TANEICHI-SAN!!!! ! \(^0^)/

Before training, I worked from 8AM to 6PM. First thing, I had a lesson monitoring and feedback session with my boss. I thought it was a fabulous lesson, but he didn’t think so, so I was bummed about my score. 🙁 It was still good, but I thought it was better. < "I have high standards for you now!" he said. Thanks. ~_~;; Then I monitored another teacher and GAVE feedback, which turned the tables, and is always has pressure. :/ Those things started and finished the day. The rest of my day was alright, other than the INTENSE SHARP STOMACH PAINS I got around lunch time. Seriously, I got them Friday, too. Wtf did I eat. ~_~ I can't understand it. I'm eating clean! Why am I getting stomach pains. *sigh* I wondered, at first, if I could teach my first lesson after lunch. Maybe it was gas? I hope? ug It finally went away, whatever it was. I couldn't WAIT to get to the gym, but you know, after a long day at work, I just wanna grapple. I don't wanna punch people. 🙁 Too bad it's kickboxing class on Saturday. Before BJ-san started class, I grabbed the recently-graduated high school student Rikiya, and we did technique for 10-15 minutes. I taught him stuff. Then, I decided to teach BJ-san some English, so I tried to set up this activity/game, but he was confused and said, "You started so suddenly I didn't know what was going on." THAT IS EXACTLY why my boss gave me a lower score on my lesson than I wanted. I started activities too suddenly, and confused the student. LOL OH the irony. I got really bummed after that. ~_~;;; But maybe it was good for me...now I'm not going to forget this. I've been watching One Piece a bit, and the StrawHat Pirates are fighting Hordy Jones and Decken. Hah Franky's new "DOCKING" robot form is hilarious! XD I laughed so hard at how excited Usopp and Chopper were getting over it. hahaha Shogun Franky!

and here is an some appearance of PANDAMAN!!! 😀 the random character who is found throughout the show in random scenes as a joke! 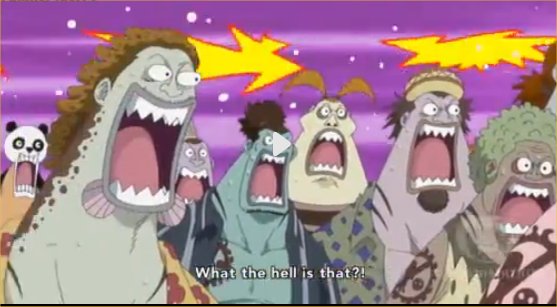