Bantamweight Michinori Tanaka is off to a great start in his professional career, with a perfect 5-0 record at the young age of 22. Fighting out of Reversal Gym Yokohama Groundslam, he’s a high-speed powerhouse who can hold his own with the seasoned vets in the pro training sessions. In a fight, you can hear his punches land from way outside the ring. 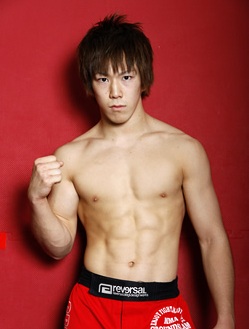 Called “Noripi” by his gym-mates, he talked to me about his upcoming fight in Pacific Xtreme Combat 34 in the Philippines, and about life. Keep your eyes out for him, guys- someday you’ll probably see him in the UFC.

Roxy: Why did you start MMA?
Noripi– Yeah, I wonder why…
Roxy: What?! *laugh*
Noripi: I started with Judo. Well, first I saw MMA on TV. It was PRIDE! Lots of Japanese Judo players were fighting, and I thought, “Wow, Judo players are strong!” So I joined my middle school’s Judo club when I was 14 years old.
Roxy: How long did you do Judo?
Noripi: For five years. Just up until I graduated high school. I started MMA after I left the Judo club, when I was 18. 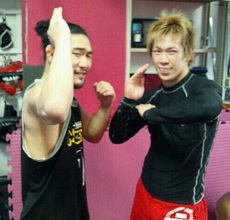 Roxy: So what do you like best about MMA?
Noripi: Hmmm.
Roxy: Like, do you like to hit people, or love learning different moves, grappling, striking, what not?
Noripi: Oh. There’s no end.
Roxy: No end?
Noripi: Yeah, there’s no end to techniques that come out. It’s fun! There are always new techniques coming out, one after the other non-stop.
Roxy: I see. So what are your goals? Short term and long term?
Noripi: Well, first of all, to fight in the UFC!
Roxy: And in life?
Noripi: Get rich!! 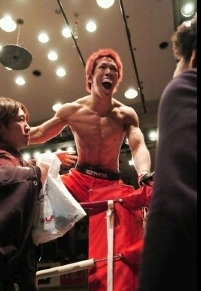 Roxy: You’re fighting on November 17 in PXC 34 in the Philippines against Russell Doane. How much do you know about your opponent, and what advantages do you think you have over him?
Noripi: Speed. But other than that, I dunno until I fight him! I can only see so much from watching footage, right? He seems strong.
Roxy: How do you want to win?
Noripi: By submission or knock out. I want to leave an impact on the fans!
Roxy: This is your first time to fight overseas, right? How are you preparing yourself mentally and physically for it?
Noripi: I guess it’ll be the same as normal fight-prep in Japan. I try not to think about anything before the fight!
Roxy: What kind of “Noripi” do you want to show the fans?
Noripi: I want to take the fight to every sphere of MMA. I want to keep moving constantly, so the fans don’t get tired, and bored of watching!
Roxy: Alright. So besides MMA, what do you do?
Noripi: I work a part-time job as sales staff. 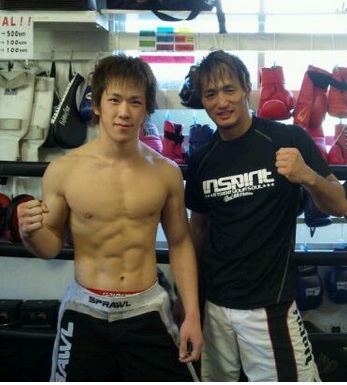 Roxy: What are your hobbies?
Noripi: Movies. Music.
Roxy: What kind of movies? And music?
Noripi: I’ll watch any kind of movie. For music, western music- not Japanese. Lately, I’ve been listening to reggae.
Roxy: Reggae? For example? Bob Marley?
Noripi: Bob Marley? No, no! I listen to “reggae cover.” How do I describe it? Like, the reggae band does famous non-reggae songs but in a reggae version. I dunno how else to explain it!
Roxy: Oh, okay, great. By the way, is your ring name “Noripi?”
Noripi: No, just ‘Michinori Tanaka.’
Roxy: No ring-name yet, alright. Do you have any comment or message to the fans?
Noripi: I’m going to bring a fight you’re not going to wanna miss, so don’t look away!

Check out his latest fight on youtube in SHOOTO against Jong Hoon Choi earlier this year!

Conducted in Japanese and translated by yours truly, Roxanne Modafferi. …