This weekend was pretty busy. On Friday, I picked up about 5 bonus lessons to cover for a sick teacher, and I may have landed myself a nice outservice. I hope I get it regularly, because I’ll get extra mulah. I’ll feel better about all the unpaid overtime work I need to put in. 😮

On Saturday, I was still feeling pretty sore from sparring so much and so hard on Wednesday night, and then my back was like metal chords from lifting on Thursday. I warmed up and hung around to spar with Akano when she finally came. We did about 4 rounds before we accidentally popped my knee.

omfg….. it is not good. Megumi said that it didn’t swell up hugely, so that means it’s not too serious. I couldn’t walk so well today, though. 🙁 I bumped into a chair and wanted to cry…. I’m worried about it, but hopefully it’s what she said, and it’ll get better soon. I wonder if I can teach my kindergarten class on Tuesday. I wonder how long I’ll have to not train. ;o; Well, at least it wasn’t Akano because she has her fight soon.

Well, I got home from work today and watched over an hour of some MMA I had laying around. My New Years resolution was 90% of my free time towards MMA, but I think a more measurable goal is at least 10 minutes or more a day, because when I get home after a long day, I want to sleep, so I have to stay up to watch. I’ve been sleeping like crap lately. 🙁 This morning I woke up at 3 again. *sigh*

I’m going to try another test cut, when my knee heals, starting from 134 instead of 131. I want to enter the ring strong, and I feel strong now. Well, actually I’m like 136 now. Gotta be a LITTLE careful. lol I’ll just keep blowing up if I keep eating. I haven’t figured out a good way to cut yet, though. Megumi says that she and Akano sit in their deep Japanese baths called “Ofuro” at home in a steamy room. Well, I only have a shower room, and the jaccuzi in Gold’s Gym is hot, but not confined…. the sauna sucked. But then again I had been tired from training the day before, so I’m not sure what the tiredness was from. If I do a test cut on Sunday, I have to NOT train on Saturday, and I hate to sacrifice a good day of training.

I’m obsessed with my Cityville and Forestville. But I’m stuck in a part in Cityville. I’m supposed to visit Mick’s house but he hasn’t asked to move in yet. He’s walking around my streets but won’t pick a house. I googled the problem and like EVERYBODY is having the exact same problem. *sigh*

Look at my cute little deer living in my Forestville! 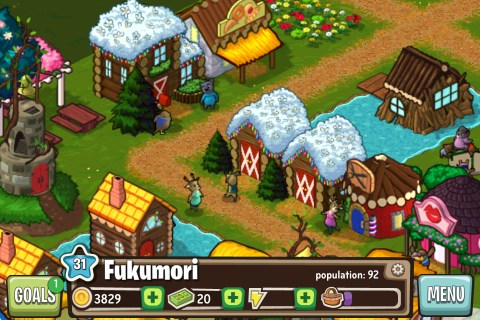