I had kind of a hard weekend. Saturday was very long. I woke up super early (4 AM) on both days. Although I started late, I ended late, so I ended up with my schedule distrupted. On Saturday I had 4 kids classes, and there was all sorts of craziness involved that I won’t get into. Let’s just say it all stressed me out. After work on Saturday I was practically beside myself….

….went to the AACC and Sakura was there. She took pics of me in my NEW Tussle Fight Gear clothes 😀 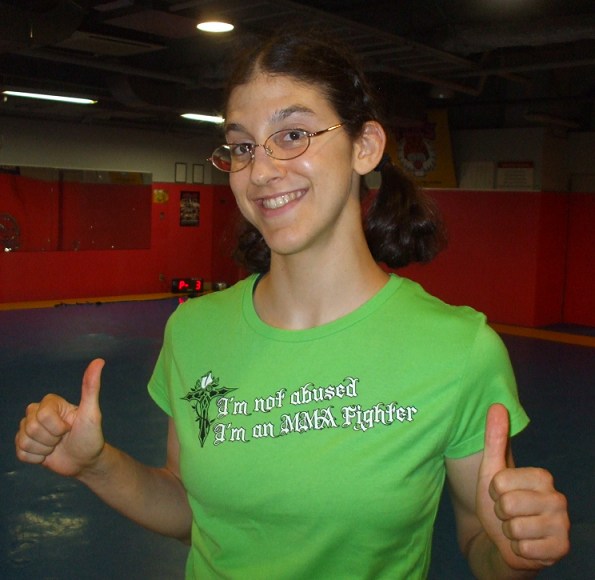 Then we did some MMA drills and participated in the grappling class. That was fun. I was pretty exhausted by the end. Always good training with Hitomi (she nearly tore my arm off at one point.) Seriously, it’s amazing where she pulls submissions out of. 😡 It’s so masterful. I did pretty well other than that. lol

After sparring, I felt kind of sick and wanted to pass out. Nakanishi-san was fanning me with a towel, but I was really embarassed and told him to stop. 🙁 I checked the clock. Had been training from 7:45ish until 10:15. Go me?

Woke up Sunday feeling like hell. I really didn’t want to go to work, and drank some supplement drink I got from a friend, but it made me feel….tingly and ….so I ate something, and the combination upset my stomach. ~_~ I wanted to pass out all day, but made it. Kept watching Rango, but got bored, so I quit half way and now I’m watching Planet of the Apes (2001). I wanna see the new one.

I still feel crappy, but WILL feel great by tomorrow because it’s Ground Slam training! 😀
And Celine is coming tomorrow!

At least weight loss is on target. Woke up at 129.5 lbs this morning.