I ran out of tissues.  It’s unheard of!

First of all, you have to understand that a popular Japanese marketing tactic, espcially with pachinko parlors, health products, clubs, and even restaurants is to hire a young person to hand out little packets of tissues with tiny advertisements tucked into them.  They’re very handy, so when you whip one out to blow your nose, you can be reminded to be grateful to PIA Pachinko, or GERA GERA Manga cafe, or “GIRLS Pop Club MELODY around the corner. 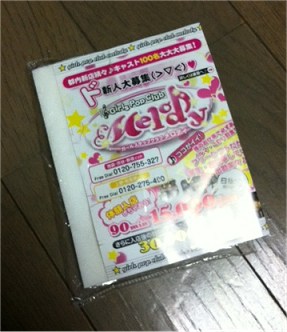 When walking down the street, on a good day, I used to be able to collect about five.  I take them home and put them in a bag for a rainy day.  The bag got quite full.

WELL, maybe this method of advertisement isn’t bringing in so many customers.  Maybe it’s the hard economic times. Or maybe I’m not in the client range of many kids of companies and they cut back on their advertising budget;  or their employees are told to target certain pedestrians, because I ran out last week!!!!! *gasp*  I’ve been using toilet paper to blow my honker, and it is not pleased.  (the honker)  But up til now, I could say, “I have never spent money on tissues in my five years of living in Japan!”  How can I go and break that now??

My friend Rachel, who lives and teaches teenagers in Toyama, Northern Japan, was visiting Tokyo for her student’s speech contest.  She stayed at my place last night rather than getting a hotel room.  Originally from West Virgina (USA), we’d both done a year abroad in Japan in our jr. year of college.  Joined together from our love of anime and Japanese culture, we had many adventures together, and we’re still young! 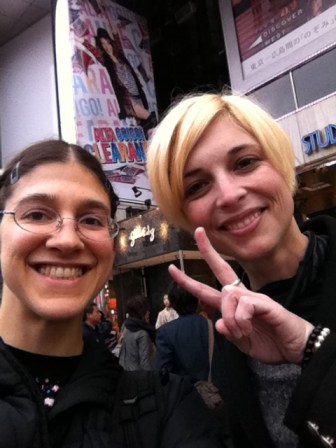 So we were paroozing the streets of Shunjuku and Ikebukuro after work.  Our conversation included lack-of-tissue-lamentation, and we tried to veer into the path of people waving tissues in front of young lady’s noses.  Most of them were rejected.  DUDE, TAKE THE TISSUES!  Or give them to me!  Leave the paper-only ads- who needs those?  Rachel said, “If it don’t got Kleenex, I don’t want’em.”  Yeah.  But the guy snatched them away when we walked by.  What, so a foreigner isn’t in your clientele? -_-;  So, Rachel snatched away the tissue packet which the guy had lowered to his hip, and handed it to me as we walked away.  SMOOTH!! 😀  I don’t have the guts to do that!

This is a really cool door to some clothing store we passed in Ikebukuro!  We went there to the huge 6 story anime store to find a cell phone cover, but they didn’t what I wanted. oh well.. 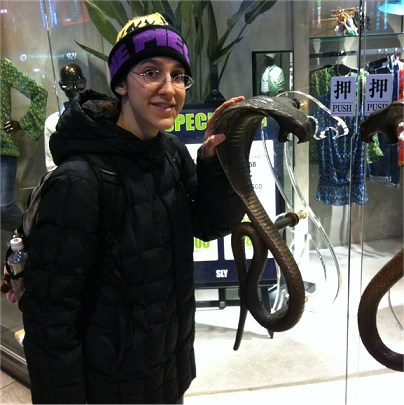