For the record, I don’t really trust Japanese trainers as much as I would a foreigner ^_^;;;. BUT I talked to the trainer at Gold’s Gym Omori about how to lose fat and keep muscle.  He said that from my description, my diet is fine, and I’m doing well by decreasing food quantity when being less active, but keep eating a lot of protein as I usually do, and it’s good to have carbs when I’m training.  If I’m too tired, it’s because I’m not getting enough carbs.

And I should lift weights, which is what I’m planning to do, few but heavy reps.  So I did that today and I was only there for 40-50 minutes total (including changing and talking to the guy).

I had lunch- a rice ball, boiled chicken and veggies, and then chatted with one of my Japanese pals for a few hours before heading to work.

Work was from 2 PM to 7PM, but it felt like all day.  One woman decided that she didn’t want to do the book because it was her last two lessons, and asked me to teach her something.  Um….like what? ^^;;;  We at Berlitz are masters at customizing lessons.  If we have years under our belts, we have the scripts and chapters memorized….so I figured out some things to teach her based on her needs, but I had to really think hard.  She said she was happy.  Oh challenges at work are what keeps things interesting!  Then I had my little rebels (a group of six 8-year-olds).

I was SUPPOSED to teach them library vocab and sentences.  Among other things, some NOT useful, the teacher’s manual said, “Teach them Librarian, library, library card shelves, borrow/lend, return, late fee, story time,  shhh, be quiet, read a book, What’s she’ doing?  She’s returning the book late and has to pay a late fee of a $1.05”

GIVE ME A FREAKING BREAK.  They can barely say, “My name is A, what’s your name?”  I have to teach “late fee of 1.05?!!!” Forget it!!!!    They are EIGHT.  They just want to throw the flash cards around and scream. They wouldn’t stop turning on and off the TV in the room!   LOL SO.  Being the master of adapting lessons, I brought my bird pen into the classroom. 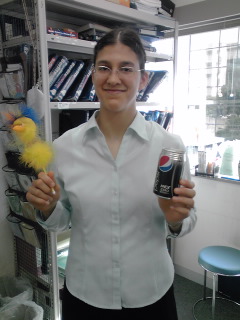 Roxy with bird pen and Pepsi

Etc. I got them all to CLEARLY ask for the bird pen.  Then I taught them all the vocab via flash cards and the books.  When I taught them, “Shhh be quiet!” they all loved it because I laughed loudly and they were like “BE QUIET!”

Then I tried to ask them questions about the activity book, but as soon as I opened my mouth, they screamed, “TEACHER, BE QUIET!”

oops, can we say ‘backfire?’  lol  Hey, classroom application.  v^_^v Then I had them choose from three kids picture books and identify something in it. For example, “This is a cat. The end.”  They LOVED it so much that they begged me to go around the table again.  IN ENGLISH, BABY!  They said, “Teacher, one more time!”

Actually, I had brought in a neck tie intending to be the librarian, but didn’t put it on.  A kid spotted it and said, “Neck tie please!” which is what they’ve learned to say when they want something.  I said, “No…” and he IMMEDIATELY said, “Can I borrow neck tie?”

I almost peed in my pants I was so excited.  You see, this is coming from my little rebels who blabber on in Japanese when my class is ENGLISH ONLY, and disobey and don’t seem to care and only repeat English when I FORCE them.  But I didn’t force them!  GO NATIVE ENGLISH ACQUISITION!!! XD XDDDDDDDDDDD  WOOOOO!…