“No scar from running away” – reflection about truth

I finished watching up to episode 485 of One Piece.
I finally saw the part that got spoiled for me, first on a website I happened to read, and then by two people I talked to.

And it made me think. What do people really want? If you ask yourself that, you may come up with a recent goal, or carefully thought out plan. I want a good job, I want a significant other, I want money, etc.

But look one level below that. WHY do you want these things? It’s worth it to go one level further. Ace wanted to know if his being born was worthwhile. Did he find out?

I asked myself, what do I want? Why am I happy? Did I find what I want?
I thought deeply, back to when I was a child and making wishes on stars every night.

I was kind of an oddball growing up- very unlike most of the kids at school, and unwilling to fit into the norm. I didn’t have many friends. I had like one or two good friends. I was lonely.

That’s why now, getting into martial arts has helped me meet so many people. At my job, I meet new people all the time. People are “friending” me on Facebook and “following me” on Twitter. I am so happy. I’m just so happy about it. I’m honored that people want to be my friend. It fulfills my deepest desire. I want friends. 🙂 It may seem like a simple thing, but the simple things are often closest to the real truth. The truth shouldn’t be more than a single word, or phrase.

Back to One Piece.
In ep 485, they started listing how many attacks hit Whitebeard. (He doesn’t have a beard…he has a mustache, lol). Anyway, when they started saying that, sword slashes 200 something, bullets taken 400 something, I knew my quote was coming. They showed his scarred and damaged chest. Then, his cape fell away and showed his smooth, scar-free back. The narrator said it: In his whole life, on his proud straight back, there are no scars from running away. “issai nige-kizu nashi.”

Just because you lose, doesn’t mean you’re not strong, or you don’t get hurt. Strong ones sometimes lose. Often lose. They’re still strong. That’s why we look up to them.

A few days after I lost my fight against Hashi, I was walking- limping through Uniqlo. I couldn’t walk so well because I had injured my knee.

I fought on it anyway. It was really stupid of me because I hadn’t been able to train for a month. I know I lost the fight for a number of reasons, not 100% my knee. I’ll never know what percent and it eats me up inside every day. But I had accepted the fight because I didn’t know if I’d have another chance, and I didn’t want to die without having fought her. I was really depressed, like my fight career is over. Then I saw that T shirt: “There is no scar he got from running away.”

And it inspired me. I bought two. 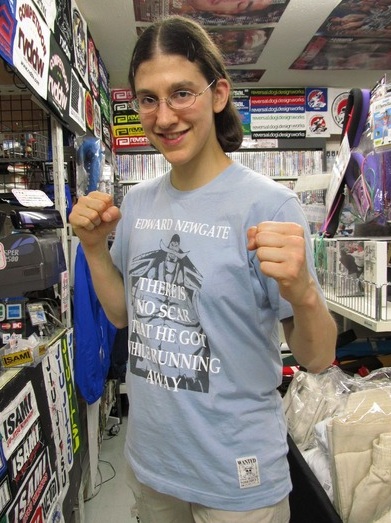 No. I’m a professional fighter. I’m proud of it. I train hard and fight hard and I don’t run away. That is all.…