On Monday, I went to the morning 10:30 class. I came in near the end of the pro practice, and Uno, Omigawa, BJ, Noripi and Wicky were just finishing up sparring. Then they started doing a shark-tank drill, where for one minute, one guy stays in the middle and everyone jumps on him and spars hard, one after the other. Then they switch people. I was waiting, but then realized that it’d be great if I had joined in, since I had to wait 25 minutes for them to finish and I couldn’t jump in half way since it’d mess up their system. ;_; That kind of sucked. Next time, I’ll join…

Do NOT ask me what BJ is doing…. 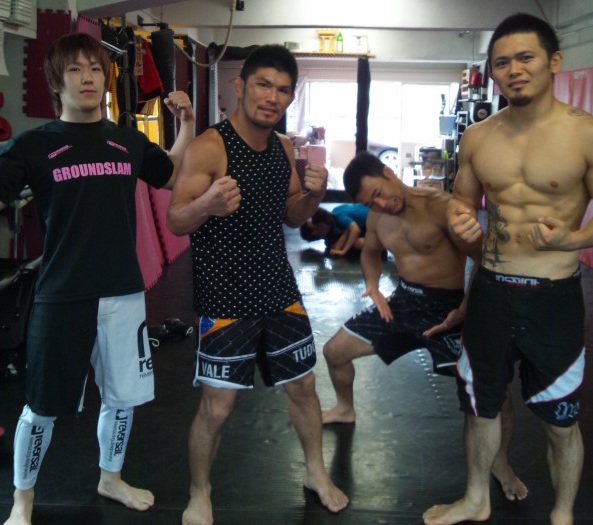 I’m the person in the blue shirt in the back ground. XD
The men-folk are (left to right) Noripi, Omigawa, BJ Kojima, Wicky.

Nobody else came at first! ;_; And none of the pros wanted to train with me, because they were collapsed and exhausted, laying sprawled out on the ground. I did some pull-ups, push ups and core work-out on a balance ball…AND THEN Arai-san came 30 minutes late, a beginner. Okay. So I forced him to practice a few juicy moves I read on the net that morning- side triangle choke, a few different ways to finish the arm-bar. So we sparred and were merry, until I had to dash off at 12 so I wouldn’t be late for my lunch date with my co-worker Gloria! XD bahaha

So we went to this new Okonomiyaki restaurant in Lazona called “Chibo.” It was DELICIOUS.

Anyway, I didn’t feel like doing striking, especially after my stress-dream, so I decided to do skip the combo striking/grappling class and do the Brazilian jiu-jitsu from 9-10:30ish!! I dug around my closet and pulled out my gi! 😀 I found my gi-top and THESE: 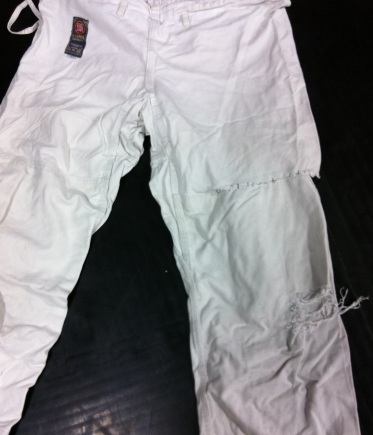 I was already stressing out about disgracing myself as a purple belt because I’m sure I forgot the jiu-jitsu grips and would get my butt kicked. I couldn’t go to class looking like this! ^^;; One leg was half ripped off. This pic is AFTER I sewed it back on. lol I could have SWORN I had two pairs of pants, these beat-up ones, and a nice pair, but I scoured my apartment and couldn’t find them. So I stopped by Isami and bought a pair. XD Yay.

I ended up hopping in the end of the 7-9 PM class and did some grappling/clinching sparring. That was fun. Not to mention I got my morning side triangle choke TWICE, and my hissatsu-waza TWICE. WHOOO HOOO HELLS YEAH!! XD~~

I joined the BJJ class run by Tetsuya Fusano (Tetsu-san for short). He’s so cool. XD His personality is great- a genki, fun loving, jiu-jitsu guy. Actually, I just found out he actively fights MMA in ZST and others. So cool. 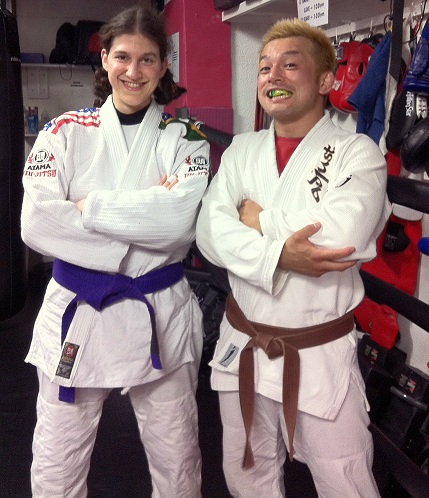 I LOVED IT. It made me remember that I remembered that I love jiu-jitsu the best….actually. ^^;; Yeah…well, Judo was my first love. I never wanted to stop jiu-jitsu, but knew I needed to focus on submission grappling for MMA. Maybe this will change. Striking practice …ug. u_U It makes me so unhappy. -.-;

I was SO exhausted but I sparred a few times before collapsing. Went to bed at midnight and woke up at 5 AM feeling like a train wreck. Back, neck, whole body. XD HAH Got ready for work slowly, limped to work, somehow did my aerobics class day-care/kindergarten classes, ate lunch, and then limped to Ground Slam where I had my appointment with Mihara-san.

Now, Mihara-san is an Osteopathic therapist, and works in Japanese “Seｋkotsuin.” He used to work at the Kubo Sekkotsuin, but started his own called “Hope Cure 9.” I’ve been to a bunch of seｋkotsuins, but I don’t find them very effective. Except Mihara-san. He’s a miracle worker! Most guys at Ground Slam go to him, and he actually trains at Ground Slam.

I limped in there and strode out. I’m serious. He had me sit on this table he set up on the mats, and touched two different points on either side of my hips. “These points should be in line,” he said. “See how far up this one is?” I was like, “Wow, really?!” Then he had me lay down and had me bring my knees to my chest. “Look, your legs are different lengths,” he said. IT WAS TRUE. My left knee was LITERALLY OVER ONE INCH higher than the right one!!! :O And I couldn’t turn one knee over my body’s central line before he started.

So he did pressure points and massage and rotated various things and 30 minutes later, I got up and like…wow, the only thinking hurting was my recovering neck injury, but my lower body was totally fixed. KAMI SAMA!!!! m_o_o_m

I was munching on an orange bell pepper for a snack when Mizugaki-san came in for his treatment. “What are you eating?!” he said in surprise. Apparently, Japanese never eat fresh vegetables for snacks between meals. XD He took a picture of me to Tweet later. lol 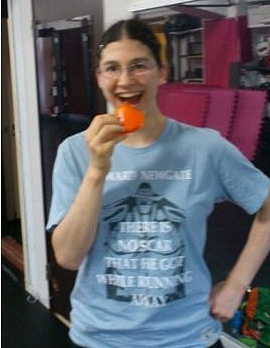 I was hoping to do the grappling class today, but I’m gonna skip it. lol Man, you guys in Japan should check Mihara-san out. He has his own clinic right next to the Shibuya station, called “Hope Cure 9.”