Today I started miraculously feeling not exhausted. Now I can get back to training like a crazy woman! This morning I lifted. Then, met a friend for Okonomiyaki/Monja yaki lunch, and then went back and lifted some more. I didn’t go to class because I don’t wanna over do it and get sick or something. I’ll spar hard on Saturday at ZFC!

Last night, I took the variant of Ambien that the doctor prescribed for my sleeping problem. And….I still woke up at 3 AM. -.-; Fail. Luckily, I did not sleep-walk or sleep-eat or have sex in my sleep (with who/what?) as my co-worker warned me. ^_^v

Instead, I had FOUR horrible nightmares IN A FREAKING ROW! In one, my mom plunged to her death off a roller-coaster. I woke up from that sucker. Managed to doze off again….and suddenly, I was taking part in a Union protest at my college over budget cuts and class reduction. Following that, the “college Union members” nearly all rioted in a chicken-wing bar because the waiter refused to serve more than 3 beers per person. I felt frustrated, lost, out of place, and starving. Finally, the ear-nose-and-throat doctor screamed at me for seeing another doctor (the sleeping doc) and for questioning his judgment and asking so many questions. Like shouting/screaming. ;_;

I’ll take it again and see what happens. But man, I was seriously depressed when I woke up and called Mom ASAP. Thanks to everyone for coming into my chatroom. You helped cheer me up.

Today I wrote a lot of my story before and after lifting. Now I’m going to watch Naruto eps in a row before taking the scary nightmare pill again. 🙁 I’ll give it two more chances (and if you don’t behave, I’ll turn you into a goon! – name that reference!)

ON A POSITIVE NOTE…Thank you Sam for posting that screencap of www.damnyouautocorrect.com. I’ve been thoroughly enjoying stuff! 😀 So if you have an iPhone, sometimes if you spell something wrong, the program automatically changes it to the ‘right’ spelling. But sometimes it fails! 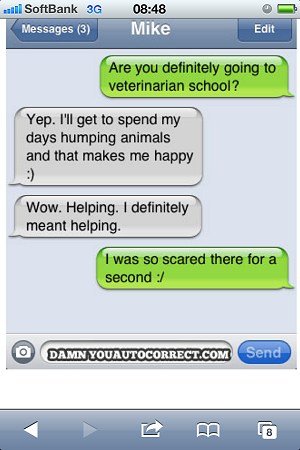