I haven’t really felt like writing a blog lately. A bunch of little minor pains and pulls and injuries in 5 different parts have prevented me from going all out in MMA practice. :/ So I’ve been doing Vinny’s Brazilian Jiu-jitsu technique every morning from 10 to 11, and then participating in whatever I can do in the MMA class from 11:30 to whenever. I usually don’t do the BJJ class in the morning because it drains me before MMA class. However, I really miss gi training and I’m so rusty. I want to feel like I’m a real purple belt. Lol I’m way better at no-gi grappling, of course.

I’m starting to feel more and more comfortable. I basically have to relearn all my grips and balance points and everything relating to holding onto clothing rather than points on the body like elbow or neck. There’s a new teacher at Syndicate: Marcelo Nunes.

Since we became affiliated with Zenith BJJ, which is Robert Drysdale’s club, he started teaching the evening beginner classes, and now Saturday morning! I really love it! The style reminds me of my club back in Boston. It’s funny how Vinny’s style doesn’t remind me of that but Marcelo does, and it’s all jiu-jitsu. I’m not quite sure why yet….

Anyway, I’ve also been teaching kids a lot! I wrote about this before, but it’s something I do every day now and I’m enjoying it. 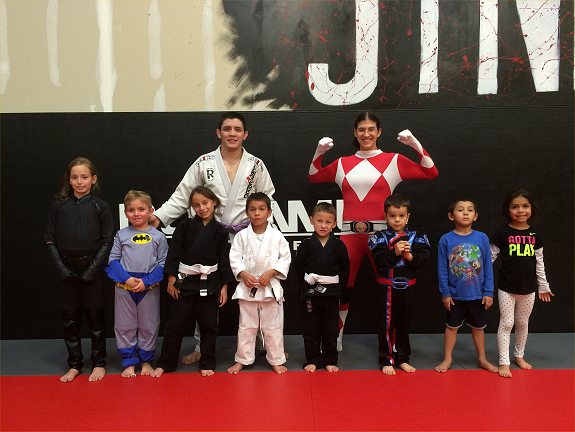 This past week I’ve healed up pretty well and I went hard in my last few MMA classes! Then the other day I jammed my toe and it hasn’t stopped hurting. I think it’s actually swelling and hurts to push off. X_x dang it!

Halloween was cool! I went to my first Rob Zombie concert on Friday! 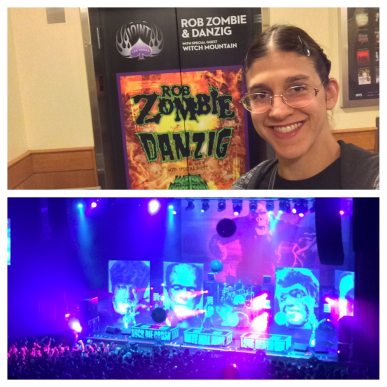 I’ve always wanted to go! I wish these things weren’t so late at night. I literally can not take it. I fell asleep from 9:30-10:30 on and off, through Danzig, no less! I was not bored, just SO tired. I hate it. I was sitting there cursing my brain as I drifted off into darkness. I call it “Roxalepsy.” I fall asleep at 10 PM sharp, no matter where I am or what I’m doing, if I’m sitting down, standing up, talking to somebody, etc. How do I fight, you might ask? Lots of caffeine. Then I can’t sleep all night, though. But for a fight, I don’t care because it’s a life event. But missing sleep wrecks me for a few days. It’s Sunday and I’m still tired from missing sleep Friday. Lol Anyway when Rob Zombie finally came on it was awesome!!! The stage had classic monster pics! I thought Rob would be bigger but he was skinny! I couldn’t see him that well because I had balcony nose-bleed seats. But that was okay with me. I actually really lucked out. I bought General Admission standing room tickets because they were the cheapest at $45, but forgot that I literally can not stand for more than 15 minutes without having back pain. I can do MMA alright, but just standing hurts me. I had to stand in line for an hour and kept squatting down because my back hurt so badly, and the security guards yelled at me! “I’m going to have to have you stand up, please.” “Stand up please!” “STAND UP!”

WTF MAN, I’m in real pain! He walked away before I could explain! What is the big deal?!! It’s not like I’m looking under any girls’ skirts. Everybody had pants and I was far enough away from them anyway. I wanted to RNC that security guy until he started gurgling.

So when I got to the balcony, sat down in somebody’s seat and hoped that whoever actually bought that seat took their time getting there. NOBODY KICKED ME OUT! It was not a sold-out show. YESSsssssss I really lucked out. I had a few other teammates who went to the show, but I didn’t tell them I was going. That’s why. I couldn’t stand, I was cranky since it was past my bedtime, and I don’t dance. Lol So I just chilled out, thought about life, listened to awesome music, took a nap, and watched the crazies run around in circles and slam into each other on the dance floor below, and felt glad I wasn’t down there. X_x why?? It looked really dangerous. I’m a new fan of Danzig now! I didn’t really know his music that much but I’m going to look it up now.

On Halloween, oh man! First was “Costume Sparring” at Syndicate. I didn’t actually think many people other than me would take it seriously, but lots of people came in costumes! 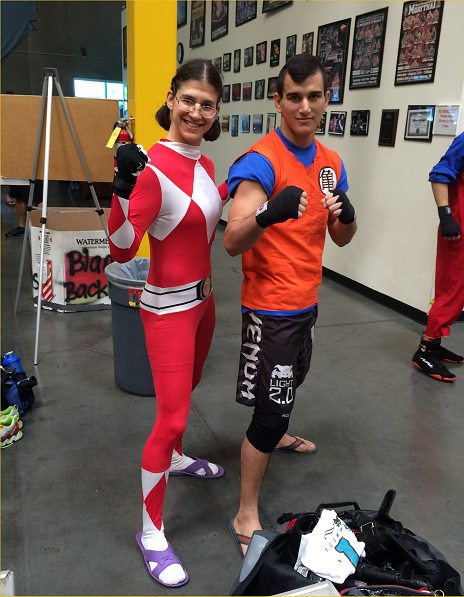 And I don’t know who John was supposed to be, but he wore this fat-guy body suit with hair hanging everywhere and nipples that stuck out like two inches. I couldn’t stop staring. X_x And I didn’t want to. LOL oh it was awful but hilarious. 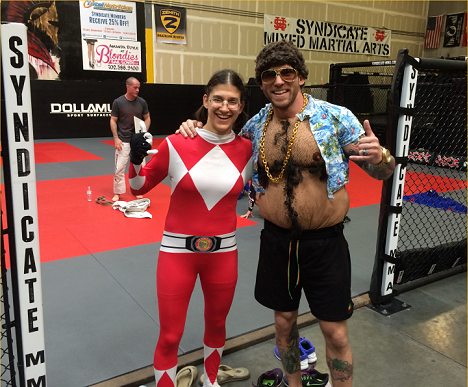 I really enjoyed that. I think I had the most entertaining sparring session of my LIFE with Tony, dressed up as Batman. 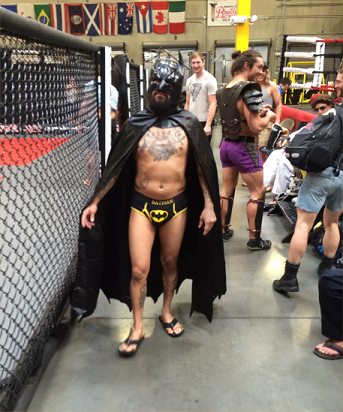 He used his cape to disguise his kicks and I could NOT see his strikes coming at all! Even when he got tangled in the cape, I tried to charge him, he somehow managed to deck me!! 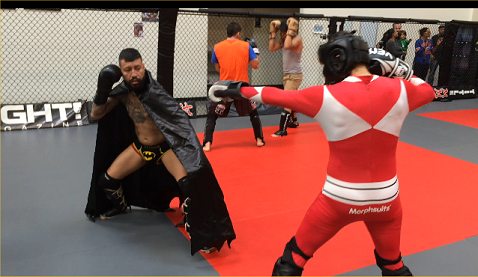 Tom Lawlor, infamous in the UFC for his dressing up and entrances, dressed up like…. ME! I was so touched and amused! Hah! Look, the pig tails, glasses, unusual socks, Star Wars shirt! XD I showed my mom and she was like, “Bearded Roxy?!” lol 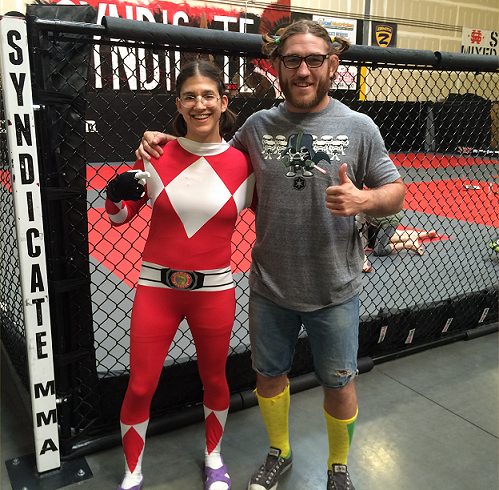 After sparring, I met my fighter friends Jessica, Clayton and their three kids! We went to the Springs Preserve Haunted Harvest! 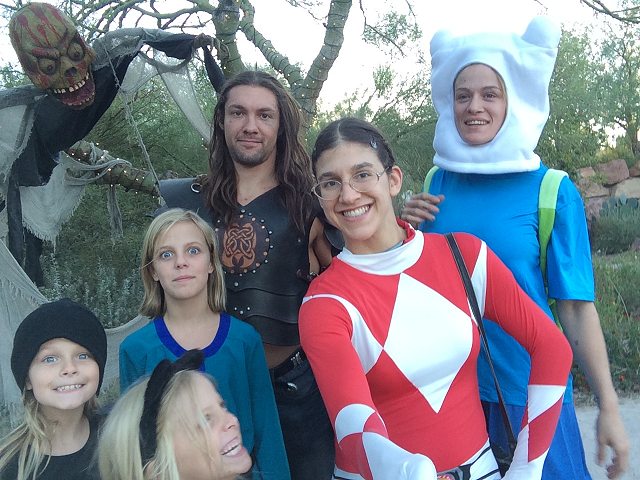 It was great! Games, trick or treating, hay mazes, a goulish Alice who followed us around …. Lol…
I love that family. 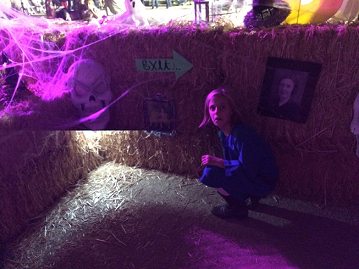 They fight ammy and pro, and their kids take my jiu-jitsu class.

Then I went to pick up Serena! Yay my buddy from Philly! 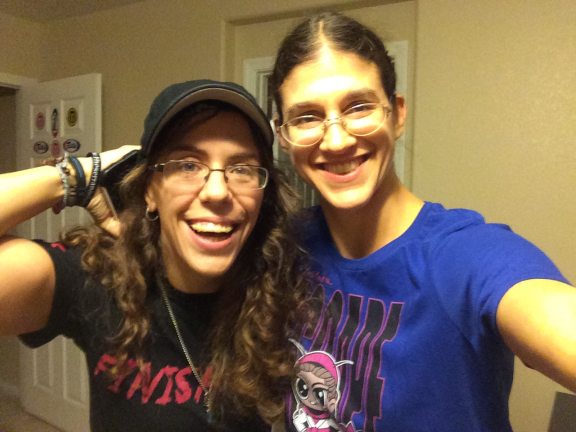 She’ll be here training for most of November! 😀…