First and foremost, HAPPY BIRTHDAY to my friend/roommate/training partner/nacho buddy/movie buddy Serena “The Southpaw Outlaw” DeJesus, aka “The Reen.”

Gee, you have many names.

But there is only one Reen. 😀 She is 26, about a decade younger than me, but we get along so well! Sometimes I don’t know what the heck she’s saying due to her ‘young person lingo…..’

But these moments are becoming less and less. At least she’s more aware of using adverbs correctly nowadays. 😀

I realized that she wouldn’t throw herself a party, so this year I threw it for her! 😀 We invited a few friends and her family.

I never take anything for granted, especially friends. Having a friend like Serena is like having the overhead light on in the room. It’s always there, bright, cheery, constant, unfaltering, illuminating my daily life. I could survive without it, but I’d be groping around, struggling. She’s always there to share ideas with, to do fun things or chores with. Having a good training partner is so important beyond words. When you train a fighting sport with someone, it’s violent, so you have to trust your body and health to another person, trust that they can use control and not hurt you. In recent years, I’ve become more careful about my training. “My body is my business.”

I hope I never ever make her feel like I don’t appreciate her.

Stilllllll trying to figure out a balance in my schedule. I’ve been doing more strength and conditioning. I also had a great wrestling private lesson with Coach John and Hannah.

aaaah jiujitsu. x_x Why is it such a struggle for me to get good training in gi jiujitsu? Maybe because you’re living the life of an MMA fighter, Roxy, and are at the best MMA gym in Vegas. You know your goals.
Yeah…. 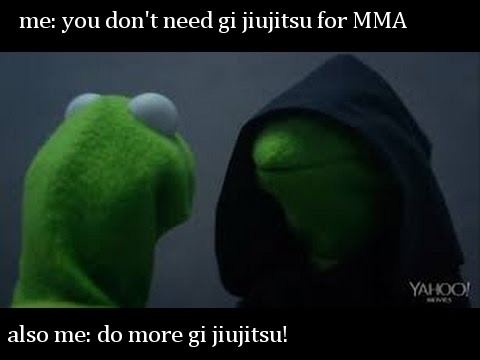 I started doing mini jiujitsu gi lessons with Casey-sensei. He wrote out a list of fundamental techniques, and upon looking them over, I realized I didn’t know many by name. Before my fight, I made a goal to go over them all, and make sure I have the appropriate knowledge as a brownbelt should. Casey is such a great teacher. Serena and I are enjoying drilling with him. The 25 minute sessions go by too fast! ;_;

So in regards to my schedule……
My dad told me a story. When he was just starting out as a salesman and was soliciting people for business, people turned him down and it ticked him off. “What should I say to these jerks to turn me down?” He asked his boss. His boss told him, “You should thank them.” “Thank them?! Why?!” my dad asked. “Because nine out of every ten people will turn you you down, so you should thank them for being one of the nine you have to get through before you can reach the one.”

That is such a cool story, and I’m applying it to my life. So this week was supposed to be attempted schedule week #3, but I got sick! 🙁 GRRRRRR foiled! I even had a fever. I have stuff to do, muscle to build, technique to perfect, kids to train. bah.

At least I will get better in a few days and am not seriously injured. Therefore, I’m really not that upset. I don’t even need something to compare that to, but unfortunately fellow fighter Tonya just had a serious injury, and a friend’s family member just got into a serious car accident, plus all over the Underground Forums is a gofundme collection for some ammy fighter who got into a car accident….. yeah the world is rough. I already appreciate where I am, my ability to do what I’m doing, my health, my family, etc.

Well, since I’m home sick, I can enjoy catching up on TV and anime shows. I NEVER get time to marathon watch stuff anymore. ONLY when I’m sick. So yeah, I enjoyed the heck out of it. I continued watching Arrow. I’m on season 5, ep 8.

I’m also into The Gifted, in the X-men universe!

I also researched some anime I had taken pics of in Japan and made a note to look up, including Hoozuki no Reitetsu, which is a hilarious parody of Japanese company life. XD

I watched a bunch of eps of that because I decided to watch Overlord with Candy and I’m waiting for her to catch up to where I am. Overlord…I dunno how I hadn’t heard about this before, because it came out a few years ago, but it’s like Sword Art Online, where this guy gets trapped inside MMORPG (massively multiplayer online role-playing game). The main character is actually the skeleton undead guy lol.

Also watching Ancient Magus Bride. It’s a weird one, but mystical and mysterious. I like it a lot!

oh, a few weeks ago, I saw Jumanji with Serena. FUNNIEST MOVIE I’VE SEEN IN A LONG TIME! I wouldn’t mind seeing it again in the theater! omg I dislike Jack Black’s movies but he was hilarious in this one! The Rock is an amazing actor, as well.

BTW I’m revamping my store. There are more options for my books – you can get a signed autographed photo now, and I’m also gonna sell Keith Mill’s photo and part of profits are going to charity. It’s not up yet, but soon.
http://roxannemodafferi.net/RSite/node/8

Also, my Happy Warrior T shirts have been reprinted so all the sizes should be in! No XXL, though, sorry about that.
https://www.maverickunbranded.com/products/mvrk-happy-warrior-tee

Thanks to my blog sponsor, My Consumer IT!