This past week was pretty awesome.

Training was awesome…. we learned some neat escapes that people had been doing on me and I wasn’t sure how, and now I get it and I can do it. Yes!

Physically it sucked because I pulled my lower back and strained a shoulder, but was still able to push really hard in all practices. I even ran stairs a few times this week cardio. My legs feel really good and strong. Man, I POWERED up those stairs and wasn’t even dying at the top! After Tuesday’s noon sparring practice, though, I literally went home and lay down for the rest of the day. ;_; 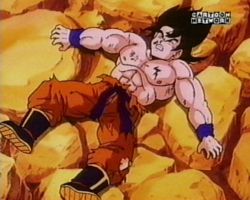 My dear chiropractor Jake was out sick and was sorely missed.

ahem Anyway, I scheduled a massage with my back-up lady on Thursday and she went a little too hard, and I went from feeling like my arms were going to fall off, to my seams got ripped and glued back together.

But I achieved ALL my goals this week!! I did a few combinations that I’ve been working on mitts in live sparring! I did all the escapes I drilled in class. My stamina never gave out. I FEEL GREAT! Ready !!!!

AND Serena DeJesus, my fighterfriend from Philly came back to Vegas, sponsored by Real Water and Real MMA! I’m gonna publish an article about that soon. It’s like The Ultimate Fighter-dealie where fighters live together in a house and train for a few months and fight at the end. XD

I’m really pleased with my training this week. It’s so awesome to work with these tough ladies. My body is sooo beat up.

Thursdays, though. We used to do boxing gloves sparring with takedowns, but now do all small MMA gloves. People are supposed to go light, but sometimes people get excited and hit harder than they intend. I wear headgear but I keep getting scratched in the eyes and nose. I feel like I’m too old to get hit in the face with MMA gloves hard unless I’m getting money for it. I’ve been there and done that. -_-;;; I’ve had enough brain damage. These past Thursdays my nose has bled every time. But that’s probably because my previous injury is healing. Although to be honest, I’m blocking most of the shots. So the few that got in, got me. Meh. -_- I gotta figure something out. I don’t want to really complain…. if I don’t want to get hit, I should block, right? hmm

I like how small gloves let us be able to continue on the ground, but not enough people go for take-downs. I try and go for take-downs. Some people just want to stand and trade. With small gloves. 🙁 If you’re not going to wrestle, then just put on the big gloves. I hope my partners only hit me 50% power with smaller gloves, but I hate to ask or I feel like a wuss…. I want to practice sprawling, too! Donny shoots on me a lot. Thanks. 🙂 But I wonder how many people will really try and take me down in my fight, since I’m known for being a ground person….

But at least people are hitting me! In Japan, men would NOT hit me to save my life. I had to be like “COME ON, TRY TO HIT ME IN THE FACE!”” So annoying. Not Groundslam, though, those pros were great.

haha fighter problems. Syndicate is still the best gym I’ve ever been in.

This Thursday, going with this one guy really made me think outside the box. His hands move SO fast I have no clue where they are coming from. I got punched in the left eye during that round, so I had it closed. How would I win?

“Well, if I punch at his hands,” I thought, “that should at least deflect his own punches to my face for an instant so he can’t hit me and I can get in and take down!” So I tried to punch at his hands, but my left shoulder went out….it WOULD have worked if my arms weren’t worn out and I could bring my hands back to block properly. ~_~;; I almost pushed him into the cage, but he was 40 pounds bigger than me with solid muscle and just side step and tripped me and I feel down. hahahaha I survived the round, anyway. Although before that I got swept, mounted and triangled in 15 seconds. haha he said we were going light! 🙂 Well he didn’t hurt me, so I guess that’s light!

Last Saturday I had my first MMA class for teens and it went well. Three boys came. This Saturday I think another girl promised to come! I gotta write stuff down because I forgot to do a few things in training. 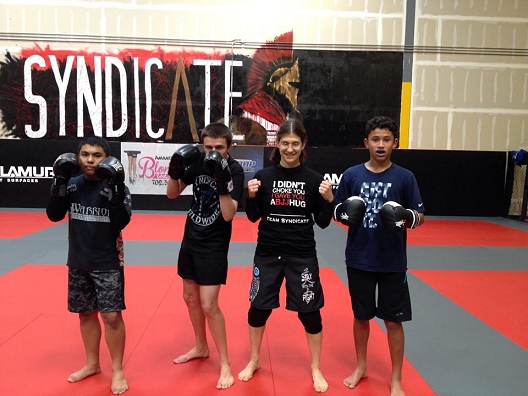