Last night, something happened that I’d been hoping for! I came across an episode of Gargoyles that I’m didn’t remember! Either I hadn’t seen it before, or I’d only seen it once. It’s nice, because I used to watch that TV series religiously, so saw repeats again and again.

On Friday, I had a pretty light day- 3 morning lessons and three afternoon lessons. I finished reading “The Little Prince” Le Petit Prince by Antoine de Saint-Exupéry (1900–1944.) I’ve seen this book translated into Japanese in so many book stores, and one was given to me (in Japanese) by a friend. So I got curious and when I found it English at my school, I read it. It’s written like a kid’s book, but to quote wiki, “The Little Prince makes several profound and idealistic observations about life and human nature.” It was fabulous! I often paused to think. For example, “On ne voit bien qu’avec le cœur. L’essentiel est invisible pour les yeux. (“One sees clearly only with the heart. What is essential is invisible to the eye.”)

I highly recommend this book. If you have an hour or so, you could even stand in the bookstore and just read it, or do it in two trips. It’s not that long.

On Saturday, I had a decent day at work, and then went to a farewell party for two of my co-workers- Max and Matt. BJ was fighting in Shooto, but people have tried to have a party before for Max and nobody went, including myself, so finally somebody organized something with a sign-up sheet and making reservations at TGI Fridays. 🙂 It was a lot of fun! 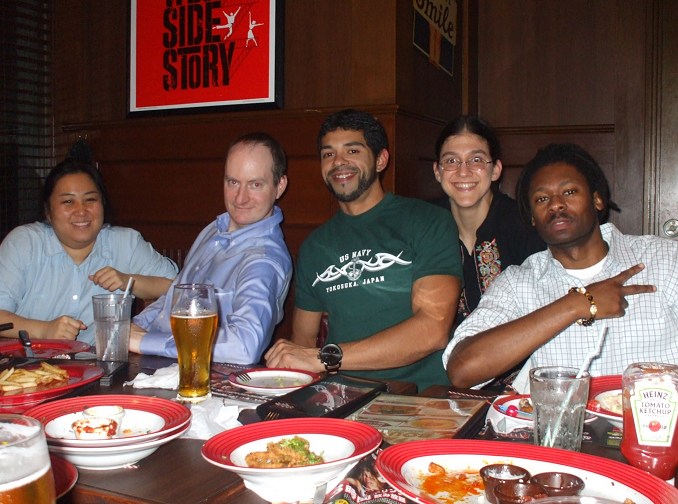 I never really knew Max well when we worked together, because he always came just before his lessons and then left right after, as opposed to Michele, who I just hung out with and chatted with in the teacher’s room. But now I’m lifting weights with him, so it’s really cool. 😀

I didn’t really know Matt that well, but he’s got a strong-willed character, and I respect him a lot. ^_^

I went to the gym afterwards at 10 and moved around for about 15 minutes downstairs….I tried the eliptical, but my knee started hurting, so I had to quit. wtf? It doesn’t hurt now. I get random pains that come and go for seemingly no reason. *sigh* Life of a fighter.

Yesterday, right after work, I went to a gym near Max’s home and we lifted weights together- shoulders and arms. I liked his routine a lot. I feel energetic. Ground Slam this morning. I have a test for myself this morning. Let’s see if I pass.…