Woke up at the crack of dawn on Wednesday and went to the gym from it’s opening time- 7 AM to 8:30. Lifted, did endurance training, etc. Got back in time to wait for the electricity guy who was supposed to come between 9 and 12. I WAITED and he NEVER CAME, so after 12, I left my apartment really pissed off. Later, I got a paper-form in the mail saying he came at 9:30. wtf? Was I sleeping? I could have been, but doubt it. ~_~; Irritated…I’m not waiting around again, he can go *bleep! :D* himself because that was a huge inconvenience for me.

I was starving at 9, but forced myself to not eat until 10:20. Exhausted. I took a nap and watched The Fountain and One Piece and played Words With Friends.

Had chicken and rice and veggies, and cleaned my place. Still no energy.

Celine had made plans to meet Megumi for lunch and she invited me, so I decided to crash their lunch outing. I did various chores and shopping finally collapsed under the clock in Kawasaki, wondering if I should go home and sleep.

I saw this One Piece dresser that I wanted SO BAD, but I already have enough and would have no place to put it. ;_; WANTTTT! 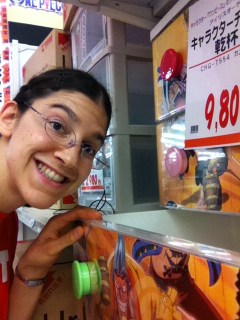 Then Rin Nakai called me on the phone!! She’d gotten my number before (with my permission) and had wanted to come to Tokyo to train, but it didn’t work out…(plus I don’t wanna train WITH her in case we have to fight).

I knew she was staying a few days after her fight and she’d wanted to get together, but I’d said I was busy…
“I’m in Kawasaki station, I have a souvenir for you!” she said.
“Oh…uh…I’m in the station, too!” I replied. ^_^; 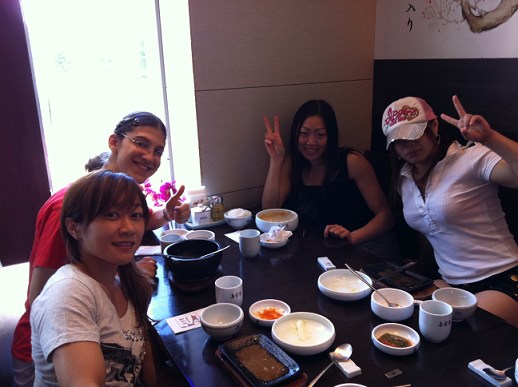 LOL So Celine came, Rin Nakai came, and Megumi came, and we were like *awkward moment* “…….. let’s have lunch together!”

It was really nice except that poor Celine can’t speak Japanese, so I was translating for her. Sorry, Celine, we crashed your lunch date! ^^; It was really cool to have a fightergirl lunch date (+ Rin’s trainer) We had Korean food. I had binbinba (a rice dish). It’s been a long time since I had a large amount of rice in one sitting, but I couldn’t stop…and for the rest of the day I had ENERGY. WHOA. O_O I guess …. I just need to eat more? But I HAVE carbohydrates, and if I eat too much I get a crash. I don’t get it. I’m doing good….129.5 lbs after a work out, so I’m on my way to 125 lbs.

Rin was so embarrassed about small bruises around her eyes that she refused to take her hat off. We finally got it off her part-way into the lunch. Come on, proof of battle! 🙁 Japanese women don’t think so….I barely noticed anything!
She’s so nice. ^_^ I really enjoyed hanging out with them. Too bad she lives in Shikoku and has to travel by plane to get here.

What’s amazing is that Megumi asked them, “So if you were staying in Shinagawa, what brings you to Kawasaki?” And Rin said, “Oh, to meet Roxanne!”
But I hadn’t made plans with them! o_O; Then it occurred to me…I’d told her that I lived near Kawasaki….but to me, that’s like ten minutes by train. She must have thought that I could exit my apartment and THERE’s the station. ^^;; So if I hadn’t been in the station, they’d have had to wait for me to drop everything and come? But it was so funny, because I could have been anywhere that day, but I decided to crash Megumi and Celine’s lunch. lol So bizarre how that worked out.…