My friend Brittany came and visited from last Tuesday to yesterday, Sunday! We had a great time but I’m really tired and sleep deprived now, hahaha! She got even less sleep. 😛

I took her to my favorite restaurant SkinnyFats twice and we actually got the same thing both times. lol 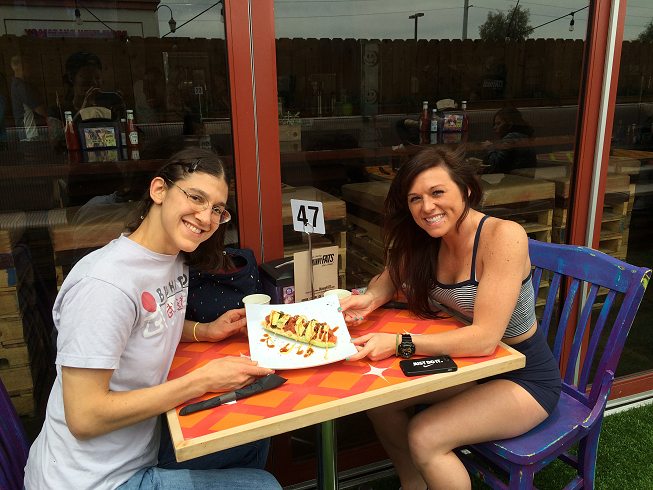 I gained two pounds and it’s all Brittany’s fault. XAD
We that night, we went to the Ale House at one point and we got the Super Mega Mountain of Chicken Nachos! I thought that was all we were going to get, but then she got this appetizer plate, and while I was in the bathroom ordered TWO ice cream cakes! She couldn’t eat everything and I couldn’t just stare at the cakes and watch them melt.

omg I thought I was gonna throw up after that. haha Lord. x_x I love/hate you, Bri!! 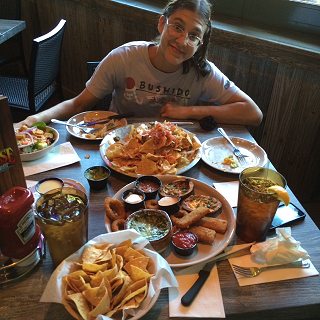 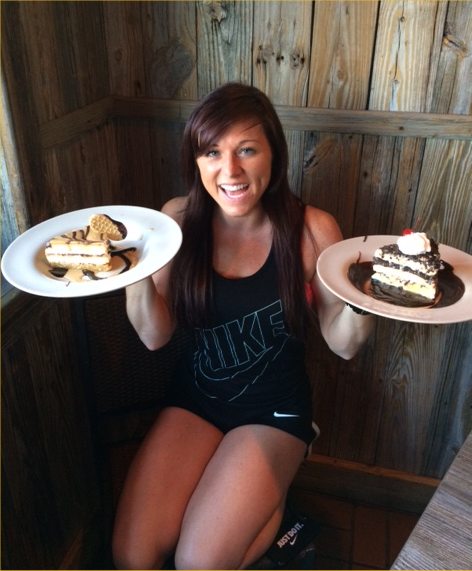 On Thursday, I had wanted to do MMA class but everything was wrong with my body. lol Nagging injuries, I felt sick (from the above), girl stuff, and sleep deprived. My body was like “eat vegetables, shut up and don’t move.” LOL I ate breakfast and went back to bed. x_x Ended up relaxing for part of the day, going shopping at the NIKE store with Brittany and eating the best freaking potroast in my entire life at the famous Black Bear Diner.

and feeling like a stuffed turkey afterwards. Again. I blame Brittany. XD (love you!) 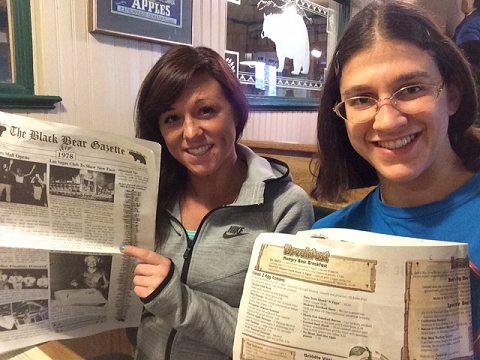 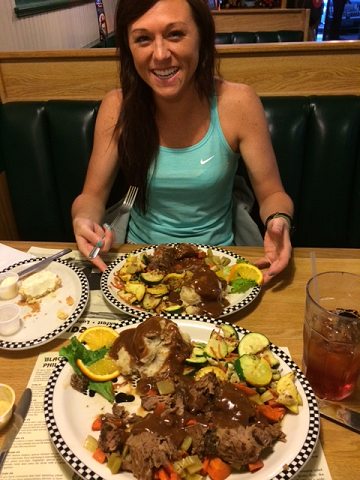 I could have gotten the smaller size, but my mom ended up enjoying the left overs.

Friday we both did MMA!
I didn’t realize it at the time but I totally monopolized Brittany and she didn’t even get to train with the other girls. oops sorry. 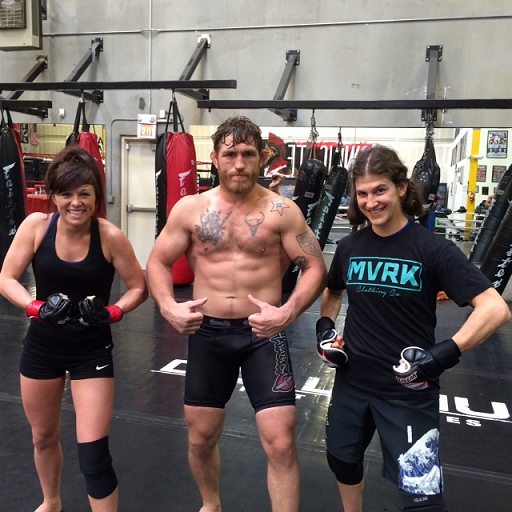 Big Coach John wasn’t there. :/ Helping Mike Pyle cut weight for his UFC fight, but Tom was. We enjoyed his class. 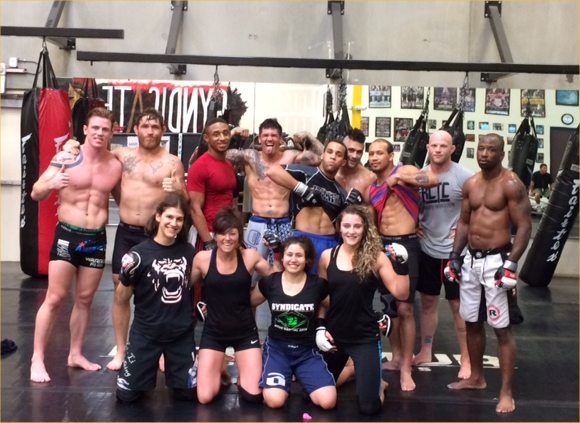 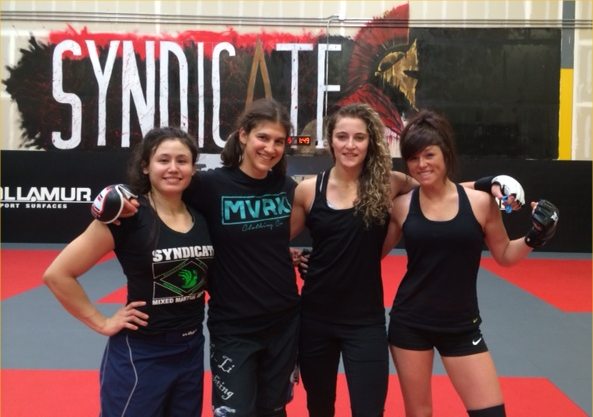 I love Tom’s wall drills at the end.

We went to the UFC on Saturday! 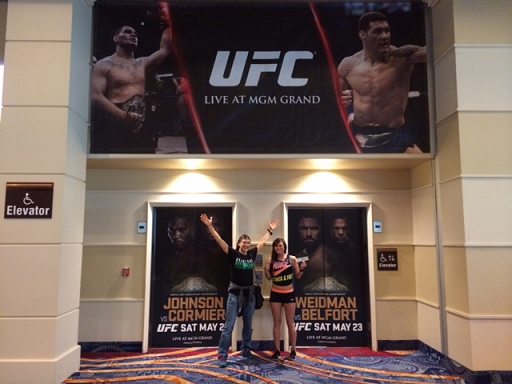 Bri said I was a walking billboard for Syndicate. lol 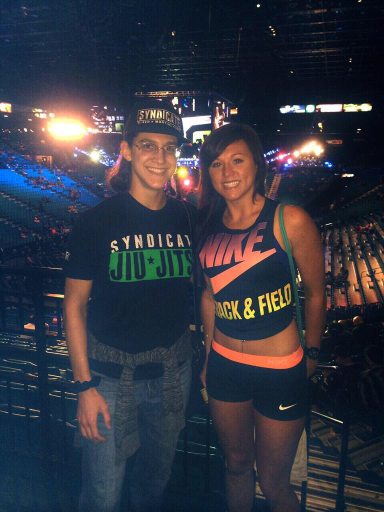 Such awesome fights! We missed Uriah Hall’s and Stun Gun’s cuz we were getting food. ;_; And the girlfight didn’t happen! I’m so bummed…I wanted to see Rose fight. ;_;

Mike Pyle lost decision from getting stuck in guard and not being able to do anything. OMFG like Deja Vous of my last fight! The top guy wasn’t doing any damage but he was being defensive and holding and staying in the top position. Grrrr wtf are we supposed to do then. The ref wasn’t standing them up because the top guy was being JUST active enough. I wanted to throw up and cry at the same time. So pissed off. ~_~; Mike is so slick and almost got two subs. gah

Sitting near us was Eddie “Truck” Gordon from season 19, and….another guy who looked so familiar but I couldn’t place his name. Brittany didn’t know. I hate to bother people for pics, but fans were getting pics, so while they were still standing up, I jumped up and said, “Hey, can I get a pic too?” Eddie was like, “Hey Roxy!” I thought, “Oh damn have we met before? Or does he know me from TUF?” 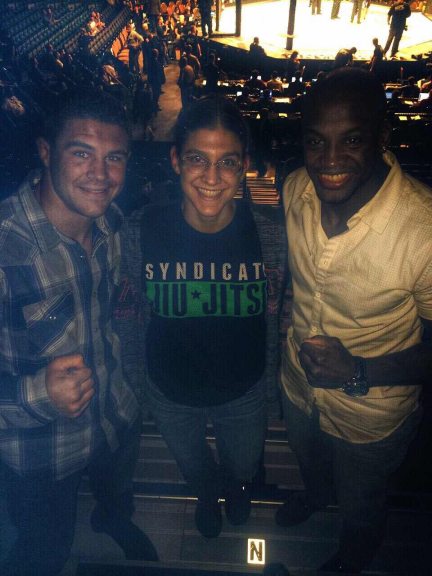 Oh, celebrity problems. I shook their hands. “Haha an Ultimate Fighter picture!” he said. lol and I sat down. A clue! omg so familiar. I suck with names. I tweeted the pic “I met two guys from the Ultimate Fighter, can you name them?” Surreptitiously trying to ask the Twitterverse. BUT NOBODY GOT HIM RIGHT. Someone was like “Tim Gorman,” but he was on my season and he didn’t look like him. I forget how I eventually found out, but it was Al Iaquinta. XD Ah, him! I saw him on Ariel Helwani’s MMA hour when he justified cussing out a fan for boo-ing. haha Super nice guy. *_* Now his face (and the spelling of his name) is forever ingrained in my memory because I was starring at his picture for so long trying to recognize him. hahaha hehasaniceface but anyway….

After the fights, we got invited to an after party but neither of us had clothes that they’d let us in a club. Note to self: freaking dress up for UFC events so we can go to after parties. It was midnight and I wanted to pass out because it was past my bedtime of 10:00 PM but took Brittany to Walmart, where in 30 mins and $30 she made an outfit. It looked FANTASTIC. She is an amazing lady, my Brittany. XD 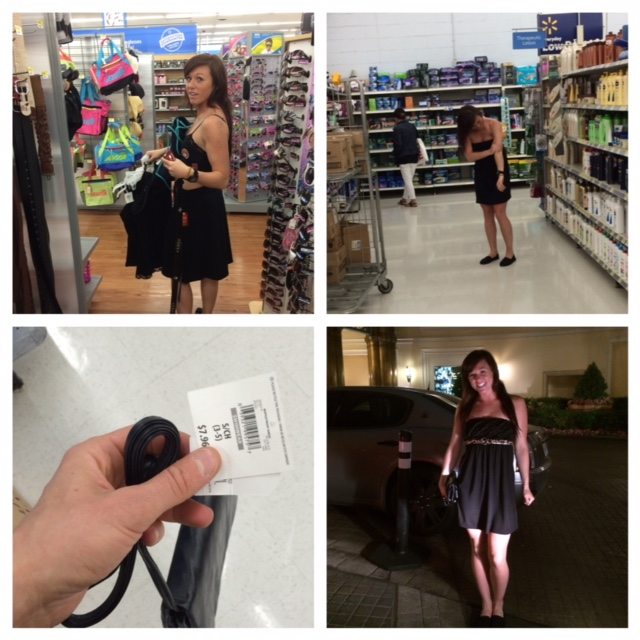 I actually didn’t join her and got scolded by Sean by leaving my friend alone in Vegas while she tried to find the club… ;_; Now I feel bad. anyway….