I had used all of my paid vacation for Strikeforce in July, I’ve been opening my schedule to work bonus lessons to make up the lost mulah. Thursday I opened, but there were no extra lessons. 🙁

So I took advantage of it. I invited my host mother (from my college exchange year, who I still keep in touch with) over my apartment. She’d seen my one in Atsugi, but not my new one in Kawasaki, and she had expressed an interest in seeing it. In the morning, she came and I showed her around. We went to a big kaiten sushi restaurant (coveyor-belt sushi) and ate WAY too much sushi. lol I love my host mother! Then at 1 o’clock, she said, “Oh I gotta go take care of the dogs now, bye bye!” She’s so cute. Pretty open minded for a 75 year old Japanese woman. I love it (or maybe not) how I’m in the middle of a story or explaining something, and she says, “By the way” and asks me a totally unrelated questions. ^^;;

Anyway, after that, I pretty much walked around Kawasaki eating any kind of dessert that I had deprived myself of during my dieting. I ate SO much chocolate…..it was super unhealthy. lol

In the evening, I went to my friend Kozo’s Japanese restaurant with a former student I made friends with, Haruno-chan! I love this girl- she is SO cute and genki and gets excited so easily. She’s a 22-year-old sophomore in college, who we found something in common. She does ko-budo, a kind of traditional martial art. Once last year I’d taken her to the AACC, and she came to my Sengoku fight to support me! Even though I didn’t actually fight…

Anyway, it was nice! Kozo’s kamayaki (grilled tuna neck/head) is the best. 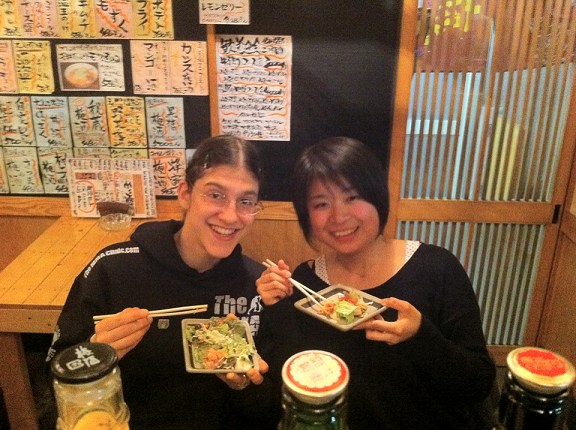 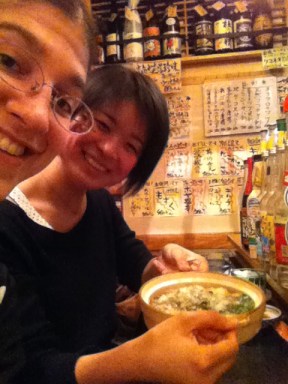 After THAT, I popped in the AACC and did grappling sparring lightly. My body still really hurt, but I did about 5 rounds. It was heaven! It was so fun! I was so at peace, and that night, I slept longer than usual.

Friday I opened my schedule and got a bonus lesson! I taught Kozo (restaurant owner friend) English in the morning, and won 10,000 yen ($120) on a scratch ticket! WOOO. Which is great, because I owed Kunioku 5,000 yen cuz I got the return flight date wrong and he had to miss one of his lessons with another customer. ^^;;; And then I paid for Haruno at Kozo’s restaurant cuz she’s a poor college student. So thank you Lady Luck for reimbursing me for that.

SO yeah, went to work, work work worked, came home, went to bed at 11, and woke up to my alarm at 5:15! Which is great ! I’ve been waking up before my alarm lately. I’m thinking that the sleep is connected to grappling on Thursday…I’m gonna make sure I get in lots of sparring tonight, and then if I sleep well again, my sleep theory is proved.…