This fight week was such an adventure! First, trying to eat barely enough to stay healthy while making sure I had a caloric deficiency so I could make weight. Cutting out ALL sodium. I usually try not to eat at ALL weigh-in day, but then I remembered one time running into Andrea Lee at a diner and she said that she was having a little bit to eat before starting her weight cut. So I had a tad bit of water and microwaved two tea spoons of oatmeal with Abundant Greens supplement that my sponsor Total Nutrition LV gave me. And two bites of watermelon and like 5 walnuts. I felt decently energetic all day during my weight cut, meaning I didn’t feel like I was dying.

Photo shoots went GREAT. I dressed up as Mileena, and John, as Raiden. Esther took the pics and photoshopped in the eyes and lightening! I think we look so cool! 😀 😀 😀 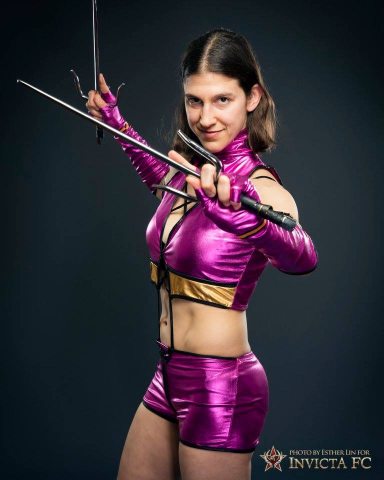 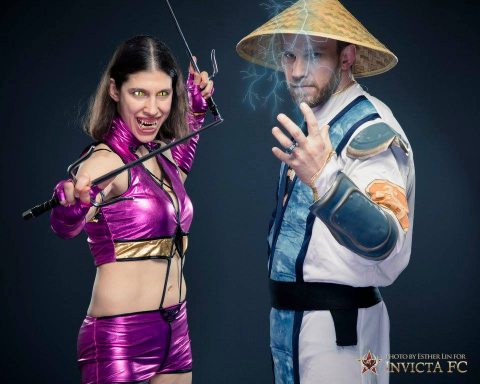 Rob and Katie hung out with me until John came to help me cut weight. He was an hour late because of traffic, and I ended up drawing my own salt bath, and it was too hot by accident.
I’m not sure whether to blame myself or him for that. lol I got really dizzy. When I got out the first time, I lay down and fell asleep/passed out and had a dream, that Konohamaru from Naruto burst into the room trying to get me to weigh myself on the scale and drink water. Then I woke up to John watching TV in our borrowed hotel room. LOL I did four 20-minute baths and lost the 4 pounds, which completed my 10 pounds of water.

Heather came over and did my make up! 😀 I hadn’t planned on that but she asked me to, and I agreed! It was so nice to spend time with her, regardless of the make up. I’m so lucky to have loving, supportive friends, fans, and coaches! 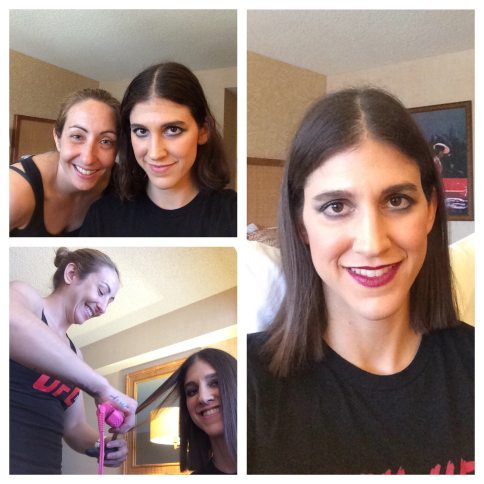 John came with me to all my interviews, even though he really didn’t have to.

The weigh-ins went exactly as I had hoped. Except my bottom teeth kept falling out so I had no choice but to keep them out, and my boot leg kept falling down. I did my routine with the sai, struck a different pose on the scale, and then my hissing at DeAnna went over well. hah!

Then my friends came and posed with me after my face-off, which was totally over-do-ing it, but I figured DeAnna’s camp wouldn’t complain. I’m pretty friendly with them, despite me trying super hard to smack talk before the fight. Hahah she was just not scared of me. 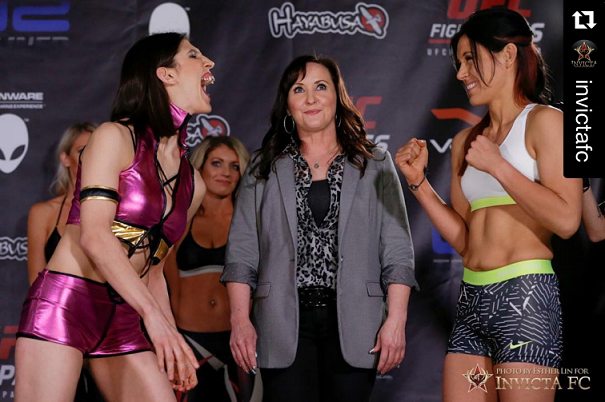 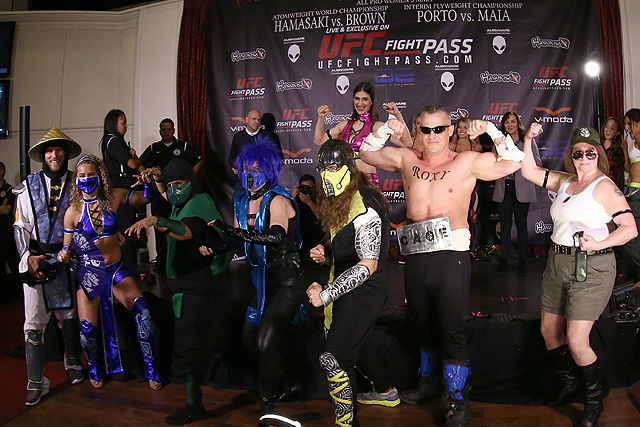 I was disappointed John couldn’t come on the stage behind me, but everybody else kind of made up for it. A few of my teammates came to watch in the crowd. I’m grateful and touched!
John is such a good sport. 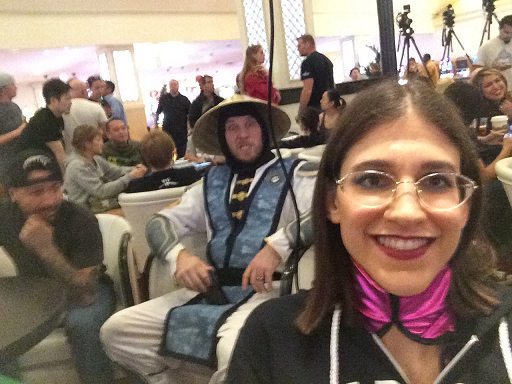 He grimaces, but I know secretly he loves it. 😀

I recovered very well. I drank lots of water, coconut water, pedialyte, and munched on granola, watermelon, carbs, etc! Then went to Hooters with a group of 15 friends and had chicken cheese quesadillas and grilled chicken salad. 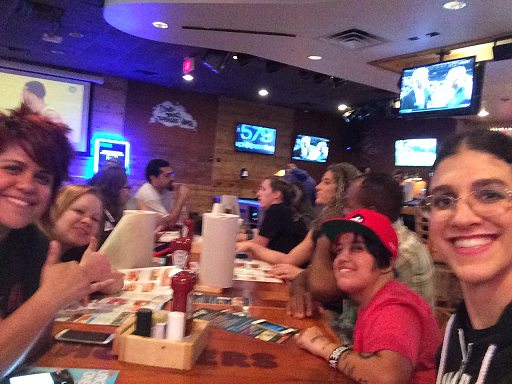 Then ice cream at the grocery store on the way home. I rebounded to 135.5 before I went to bed! 😀

Fight morning, I ate pancakes…and a lot of stuff. After weigh-ins, it’s my job to eat as many calories as I can without getting sick. Then I get loose stool and indigestion all day because my body gets nervous. I popped into the gym just to pass time and not stress out thinking about the fight. I watched a bunch of World Trigger (anime) eps.

Before I knew it, it was time to go! Meet at the Tropicana at 3:30. I got to chat with Shayna Baszler and Jessamyn Duke in line with Tom and John for a while. 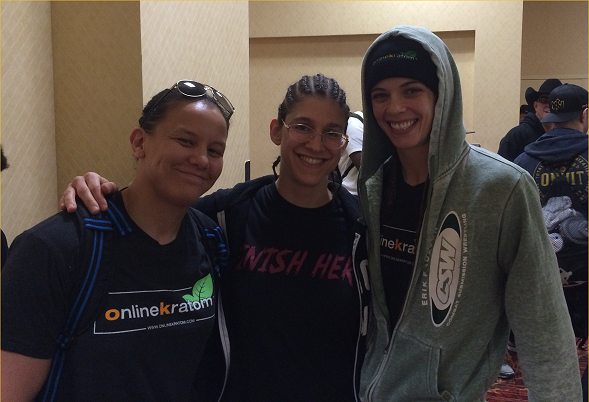 Then we went to the lockerrooms. So to speak. They were like meeting rooms of hotels, kind of. Just had four small mats and chairs, which is fine. There wasn’t much space to warm up, but we could move around in the big hallway, so that was nice. However, the bathrooms were SO far and the public ones, so I had to go through fans! Thank goodness everyone wasn’t stopping me for a picture every five seconds, because fighters are always going to the bathroom a billion times before fights. One time I ran into my opponent DeAnna on the way and we chatted a bit, and then a fan spotted us washing our hands and was like “can I get a picture? OF BOTH OF YOU?” so, with the bathroom stalls in the background, we hovered on either side of her selfie and made funny faces. LOL What a unique picture for her.

I’m soooooo glad I didn’t have to wait so long to fight. I was only the 5th fight so I didn’t have to wait until late at night to fight, which is perfect, because I start getting sleepy around 9 PM. ^^;; At least in Kansas City, the time is two hours ahead, so my body is okay. I was worried about Vegas, especially with Daylight savings time being A FEW DAYS AFTER THE FIGHT. Why couldn’t it have been before? Anyway, it was fine. Good warm-up, and good entrance. I didn’t forget to take my t shirt off this time. Tom and John walked me out. I feel really comfortable having those two by my side. Just hearing them talk to each other makes me feel more relaxed. Also I listened to Rob Zombie’s “Go To california” on repeat while John was wrapping my hands. Such a comfortable wrap, as usual. And the gloves were comfy and not stiff, too! I’ve had gloves where it hurts to make contact and hit something. 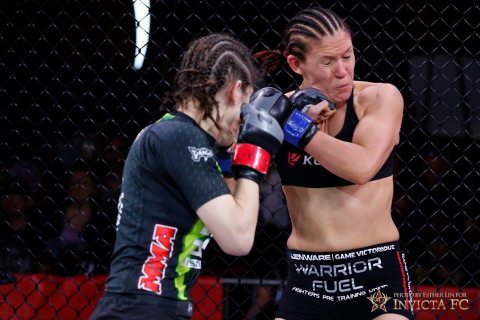 So …when I was watching tape on DeAnna, I just thought, “Okay she’s well-rounded. I’ll just have to do everything.” But John was like, “she does this and this and this, so you should do this and this and this.” holy crap, I wouldn’t have thought of those specific things myself. Well, that’s why he’s the master coach and I’m the fighter. I want to be a coach myself someday but :/ haha it’s not looking good, at this point. He’s so good at analyzing! Literally everything he said would happen happened, and I just did everything he said to do, and most of it worked. 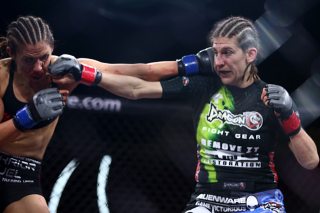 I’m really proud of myself for being able to think straight and strike the way I wanted to. 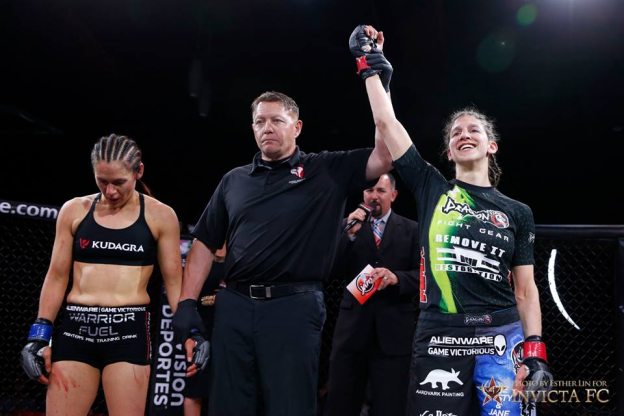 I hoped to get off a few more flurries and combinations. I had planned to do more kicks but she kept catching them. Her physical strength impressed me a lot. I didn’t expect to be taken down off the cage. I learned a lot from this fight. 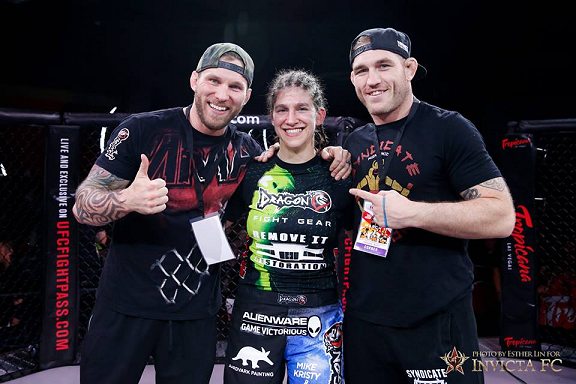 Lots of people came out to support! My students, friends, training partners! 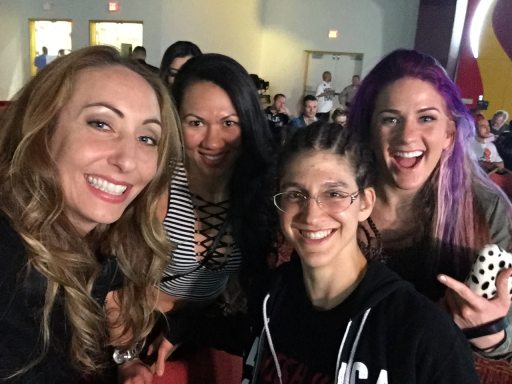 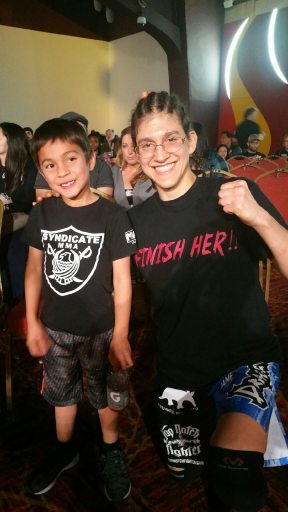 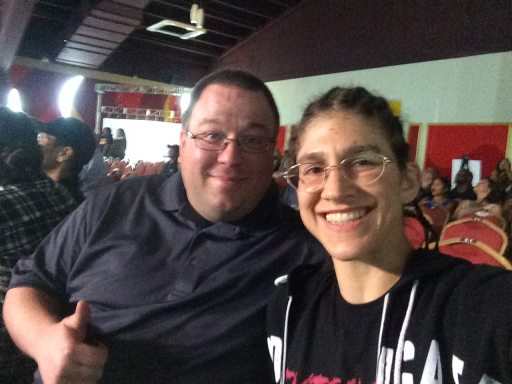 I went out to dinner at Denny’s with my group of friends. There was one waiter and one cook but we got to chat a lot and it was nice. Thanks for bearing with me, guys! 🙂 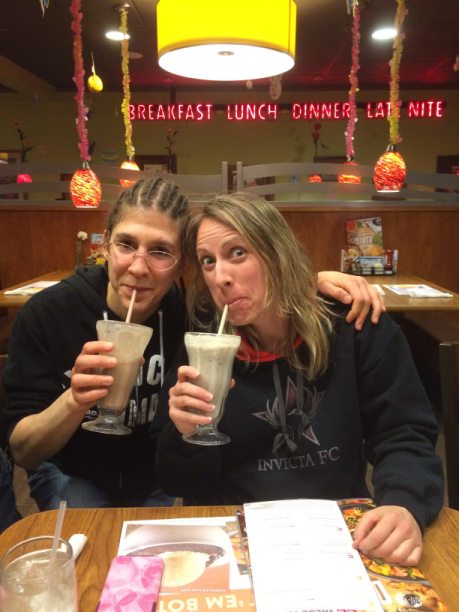 Yesterday (Saturday) I took Katie to BJJ at Syndicate and then we went out for lunch at SkinnyFats before meeting up with everyone else. I was planning on going to Mesquite to watch my teammate Jordan fight for the title, but I started feeling like I was gonna crash hard, and the post-fight soreness started to set in. I barely slept the previous night and I usually get sick after fights. so I didn’t go. sorry Jordan! But he was awesome and subbed his opponent for the belt!

I enjoyed walking around the mall with everyone yesterday. 🙂 I’ll miss you all!
I went to bed at 8:30 which was turned into 9:30 because of daylight savings time, and woke up at 4:30 (which used to be 3:30) HAHAH YES my body is finally on tune to normal time! yay daylight savings time!! 😀

My eye is hurting way less. I got scratched in the fight but I had medicine from the previous week when I got poked in the eye in training.

I am soooooooo sore now. x_x I can barely move. Why does this special full-body soreness take a full 24 hours to set in?…