I saw it in the theaters today! I was SO psyched. I’d been waiting two years for it’s release! The first two movies KICKED SO MUCH ASS.

Well….first of all, my expectation was that the first three movies would be a rehashed, condensed of the first 26 episodes, and then the last movie would be all new. Um, no, the third one was pretty much 80% new material. Therefore, I was SO confused and I had NO idea what was going on. The only reason I could follow the other ones is because I knew the story. I had so much trouble understanding the specific technical lingo Japanese. 🙁

It didn’t help that the movie was made to be purposefully confusing, because we were looking at it from Shinji’s perspective, and HE was confused. So I was like “who is fighting who why where when how?” So finally near the middle/end Shinji started getting it, and I started getting it a little better. 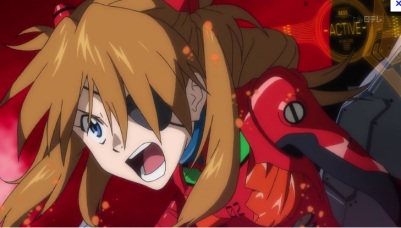 So…it was really dark. @_@ It was a good movie…they added computer graphics, and the music and voice action was fantastic. It’s just…the plot. @_@ I felt bad for everyone. LOL And if Misato had just EXPLAINED certain things, certain things probably would NOT have happened. Don’t you just hate that? I wanted to strangle herrrrrrrrrrrr. omfg

I did like how Kaoru had a much larger role, but I kind of didn’t understand what happened finally….aarrrrrg I can’t wait for the subtitles. ;_; Hahaha stuff was happening and I was like, “OMFG It’s happening….how could this be happening! And what exactly IS that?” and then Gendo and the whole Nerv team are speaking in kanji.

I was like…depressed all day. lol Well, that’s like how I was after watching The End of Evangelion (*previous movie) in 2001. Mom was like, “Okay let’s go to Judo practice now,” but all alone the ride, I kept seeing Ayanami’s head in the clouds. @___@;; like, I’m not joking, I was hallucinating stuff. In the trees and along the horizon. I kept seeing weird stuff, I swear I’m not joking. That movie disturbed my psyche.

Anyway, it was a good movie, but disturbing. The theater was relatively full, unusual for 9 AM on a Monday morning. I saw kids…why weren’t they in school? lol But after the movie was done, everyone was SILENT and shuffled out SILENTLY. Some people were just sitting there staring at the blank screen (I’m not joking). ONLY kids were whispering among themselves.

I’m so pissed off at Anno, the director, right now. lol I think he hates us fans…. I mean, he did a good job…hah I just wrote ‘god’ job as a typo. Not so far from the truth……