I had a blast on National Foundation day

February 11th is the day the government designated as a national holiday to celebrate the day Emperor Jimmu founded the country, in 1873ish. (Wiki: Publicly linking his rule with the mythical first emperor, Jimmu, and thus Amaterasu, the Meiji Emperor declared himself the one, true ruler of Japan….read more:[5] link to wikipedia )

SO the lucky ones had the day off from work, and people with service jobs, or unlucky business people with mean bosses, still had to work. Mondays are always my day off, and I don’t get a replacement day (called “Happy Monday” in Japan, where I can choose another day). However, my friend and former co-worker GRACE got the day off!

So we got together to play.

Well, first, I went to my gym at 9 AM, watched training, and wrote my book. Then, I met Grace at 11 in Kawasaki.
First, we went to Cinecitta, a kind of “Little Italy,” to fend off the Alien Invasion. 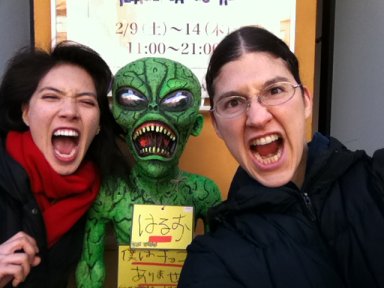 Then, we had lunch at this wonderful Chinese/Italian food buffet combo. (which is prompting me to start my diet together with Brittany, for moral support. lol) That was kind of fantastic. XD

I witnesses something amazing.
The Shumai Chinese dumplings were SO popular it was ridiculous. They were served in a tiny, fist-sized brown Chinese steamer thingie, like this:

But the spot I thought they might be was always empty. Okay. So once, I was getting food and I saw a chef coming with a huge platter, of maybe like 50. They stacked up on top of each other in like 4 columns.

THE SECOND he put them down, even before his hand left the tray, people SWARMED. One guy reached down and took like TEN. I was like, “HEY!!” People took not just one, but multiple ones! I was standing RIGHT THERE and I got the LAST ONE. Like, literally, I had to try and reach my hand in because I could see there would be a fight!

I got one! It was good! But the tray lasted literally five seconds. I couldn’t even get one for Grace! She never ended up trying one because you had to be right there at that exact moment. LOL

Then, we went to Village Vanguard and BATTLED FOR THE SAFETY OF HUMAN KINDdddddddd! 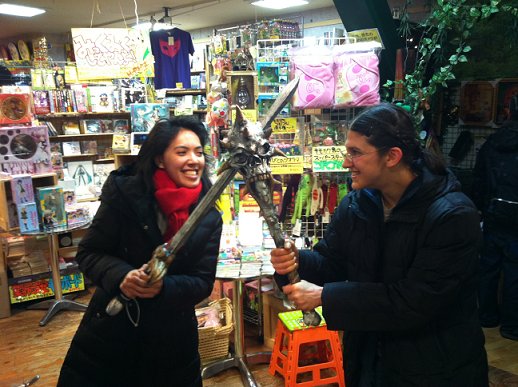 And got this nice-looking random customer dude to take our picture. Three times. XD I charmed him into it with my keigo and excessive dorkiness. Silly foreigners. Look, my club has a skull on it. 😀 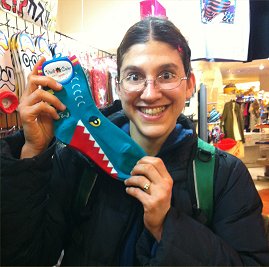 LOOK, I got shark socks! I love love love sharks! They were expensive (like 6 bucks) but I HAD TO HAVE THEM. ;__;

Then we wandered around the Lazona shopping mall, and went to the pet section. I wants hamster! But i can’t has it! ;_; Wants! My preccccious!!! I know I don’t have the time to play with it and take care of it. ;_; 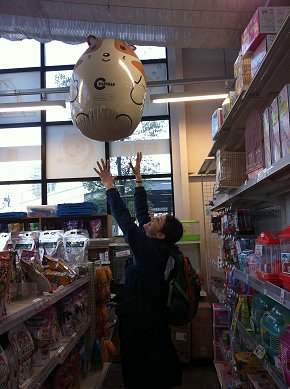 THen I changed my hair style! 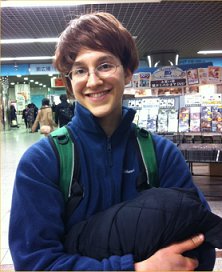 Not! It’s a wig! Hah I took a pic and tweeted it and fooled a few people. Then I sent it to my mom, and she wrote back from work, “It’s a wig, right?” Hahaha I had the same hair style for 10 years, and then when I finally changed it, I parted it down the center instead of the side, and braided the sides a bit. Then I didn’t deviate from THAT for another 5 years. 😀

We sadly parted ways at like 4, after which I went to Gold’s Gym to PUMP IT UP and try and turn some of those Chinese dumplings into muscles. ;_; lol

Then, came home, dumped my stuff, grabbed my book stuff, and went back to Kawasaki and studied/ wrote in a cafe for a few hours until it closed.

That was my day. It was splendid. 😀 Except that I couldn’t train. ~_~
But my time will come. Now, I gotta write my book faster. …