So after the last of my FIVE goldfish died, I totally lost confidence in my ability to keep them. I know that it might not be fair since they are carnival goldfish and those specifically tend to be weak. :/ But still…I tried so hard, but they died. I wanted to get another fish, but it’d cost MORE money to keep buying NEW drops, new filters, because my goldfish had that disease. I already spent like two hundred bucks on this so far. Too expensive. I have Drifter, the beta! 😀 I’ll keep him! 😀

So, I have this large tank and gravel….

I know crabs. I used to have lots of hermit crabs when I was younger. So I got two! 😀 I should have only gotten one, because I think they fight sometimes. :/ That’s actually why I stopped keeping them, cuz one caught the other when it was trying to change shells and tore it apart and it died a slow, painful death. I saw this and was freaking traumatized, partially because I felt responsible because I touched one to help it into it’s shell before the other one came, BUT it freaked out and RAN AWAY WITHOUT ANY SHELL into the corner…. -_-

SO I tried to put something as a divider down the center of the tank, but one of them STARTED CLIMBING IT with this AMAZING GRIPPING POWER. Man, I totally underestimated their gripping power.

They’re so tiny and cute! 😀 I’m gonna have to get glass…plastic or aluminum can be gripped. 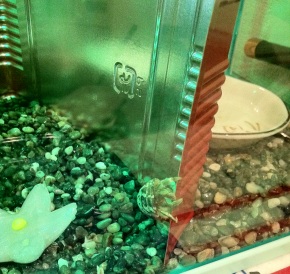 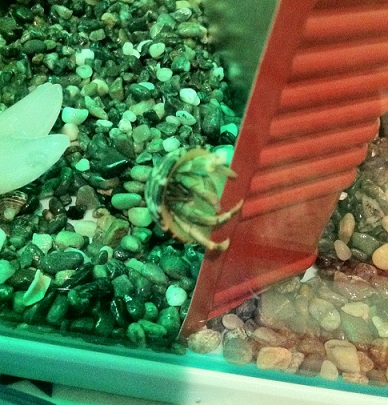