I’ve been feeling frustrated and burned out. Every day I come home in the evening not having the mental energy to even watch TV. I just want to sleep and not be tired anymore. I’m tired of running stairs twice a week and doing burpies and tons of physical training.

For me, life is a race to see how much I can get done. Training is a race. I always need to do as much as I possibly can in a day to get better. Who knows how much time I have left to fight, or train? Or walk? Or live? I could lose my leg tomorrow and never train again! Live in the day like there’s no tomorrow!

I think it’s a combination of my beliefs and my Modafferi blood. There’s a fire burning inside me (that only goes out when I get food poisoning LOL) to GO GO GO. Modafferi’s can’t relax. lol 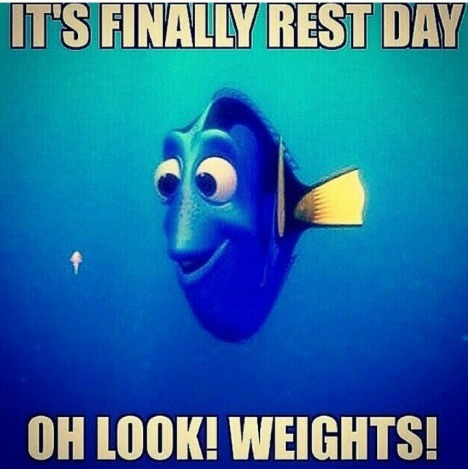 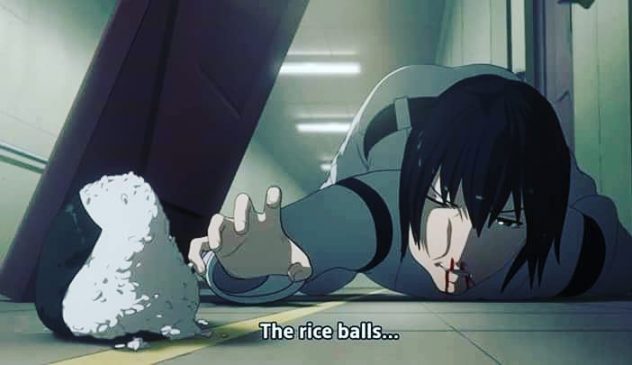 I found out I probably won’t offered a fight date for a while. Yesterday I was upset. I went home and ate a mini refried bean burrito. (it’s sad when a tiny amount of carbs is your cheat meal. I know I would have nightmares if I did more! I had one a few days ago where chocolate was pouring out of my locker!) But then I thought about it. There are so many positives! I HAVE A UFC CONTRACT! I’m so happy and proud and honored! Thank you! 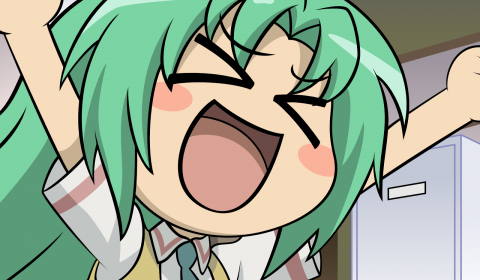 They want me to fight again!!
Last year in 2017, I fought SIX times! I won 1 by armbar, 3 by TKO, and lost 2 by close decision.
My training has made me stronger and better so far! I’ve never felt so strong and healthy. As time goes by? Pppffftt the world will be like….WHO IS THAT? 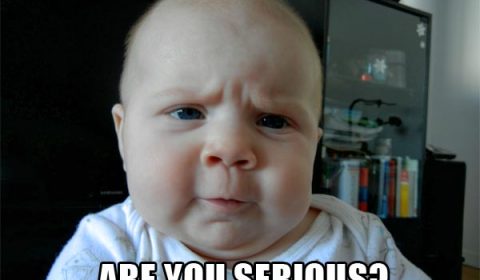 haters I don’t have haters, but doubters will be like, “I thought she sucked!?” And I’ll point to my sherdog record that says “KO” and say “um people who suck don’t KO people by accident in the UFC.” 😉 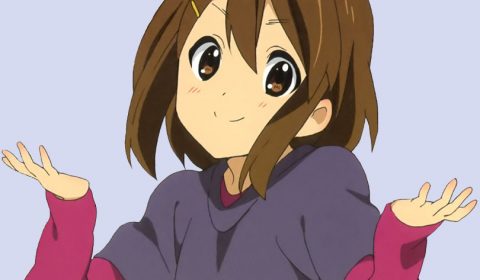 At least the fight date doesn’t coincide with my bestie Serena’s fight April 14th. (She’s fighting in ICF/ Fusion Fight League in Great Falls, Montana! Go watch!)
At least I can go to my step brother Peter’s wedding May 5th.
At least I’m not broke so I can live off my previous fight money longer.
At least I have the best coach I’ve ever met, aka Big John Wood.
I’m working out the jiujitsu situation….I think it’s improving.

Recently, I rolled with BJJ champion Tammi Musumeci (link embedded) and felt like a white belt again. Literally. I’m decent at passing De la Riva guard, so I approached her and the second she sunk in her de la riva, my knee turned inward and she was taking my back. 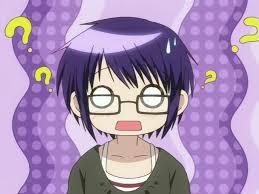 So after she tapped me out and I stood up and approached her again, I thought “Okay I’m gonna turn my knee OUT really hard and she’s not going to be able to take my back….” and suddenly I was being swept and mounted. 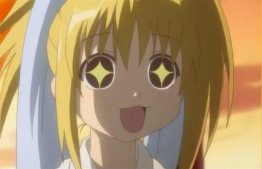 I know that I’m only going to get better because I’m going to figure out how she’s doing that and learn from it! 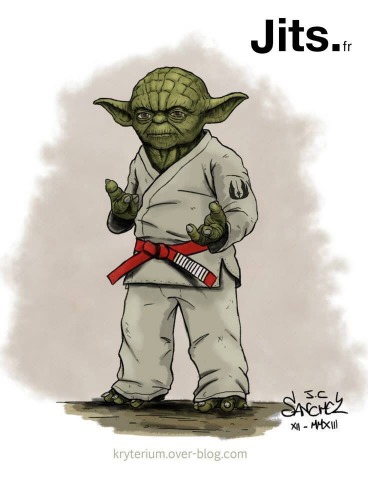 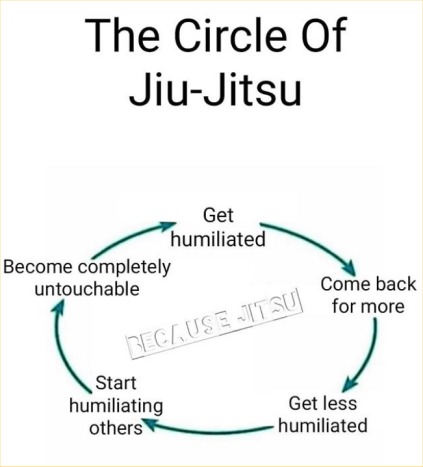 Thanks to Casey and Rene for being good teachers, too. CASEY CASEY I did what you said yesterday and it was working, as did something Rene said. 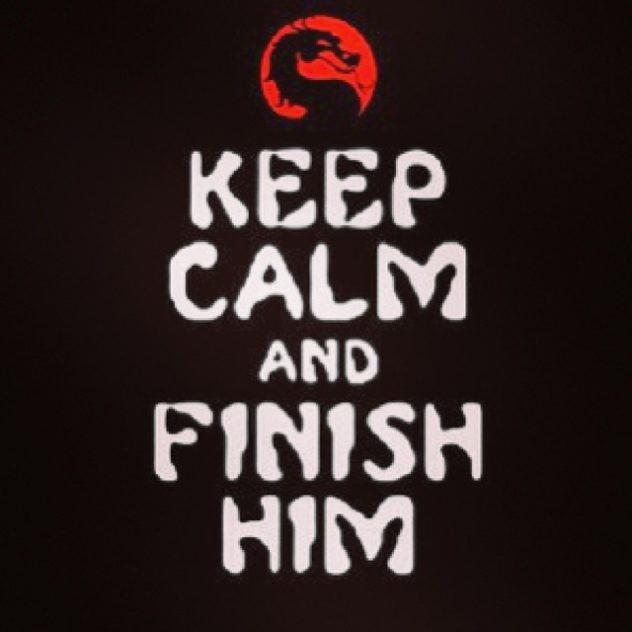 aaaah. I feel like I’m neglecting to keep in touch with some of my friends, I’m so tired and busy.

Three of our kid students competed at the open house on Saturday! I’m so proud of them! The Dunham jiujitsu kids were tough! Eli and Artem finished their opponents 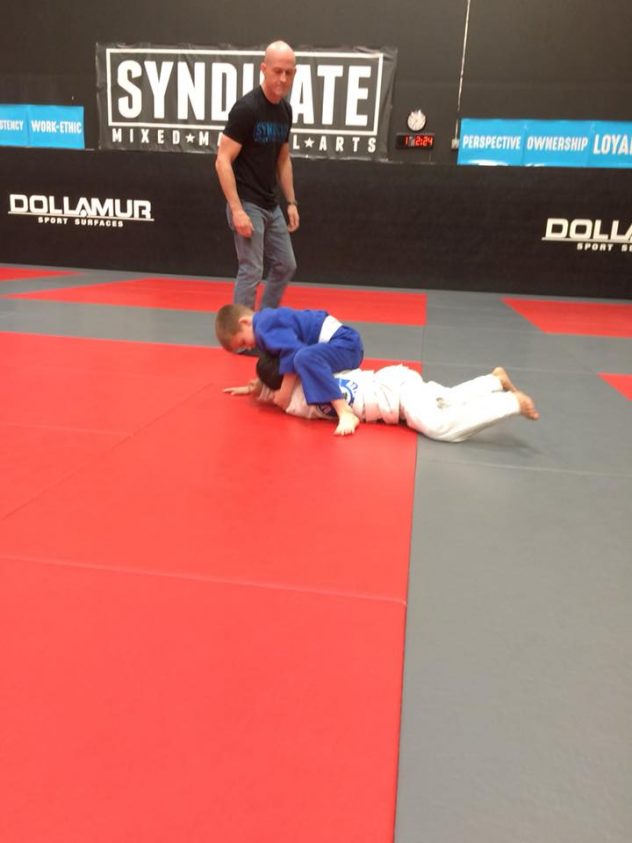 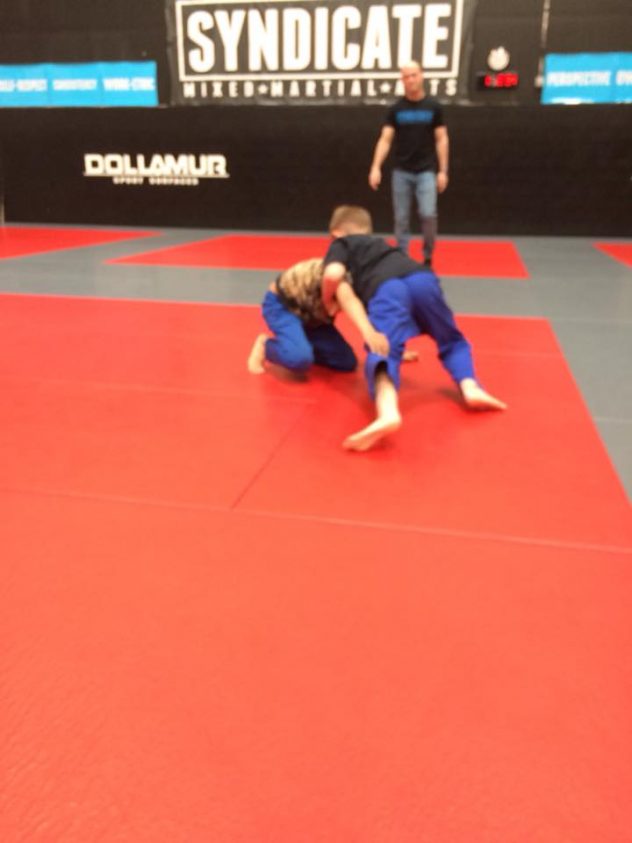 and Aleena had a tough match against a strong girl, but did well. She overcame some fear and insecurity to fight the second match, for which I was very proud of her.
<3 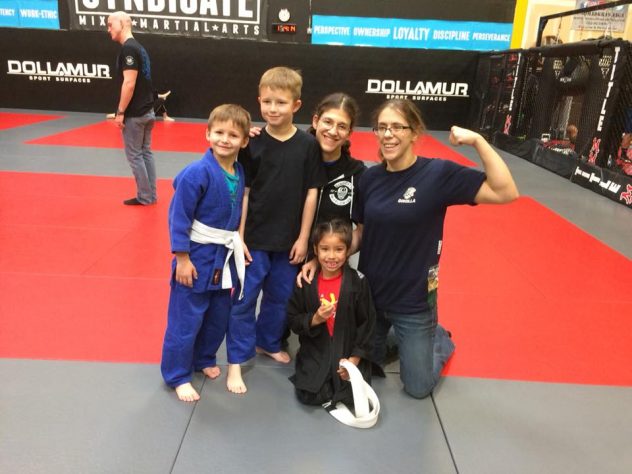 My buddy and training partner Chelsea got her stripe at belt/stripe promotions a few weeks ago, and I helped by being her partner. 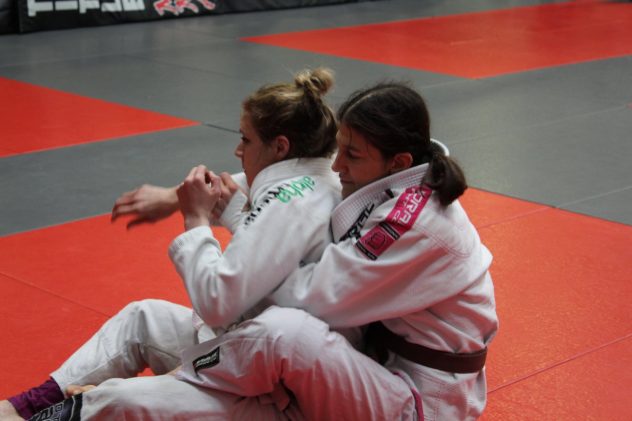 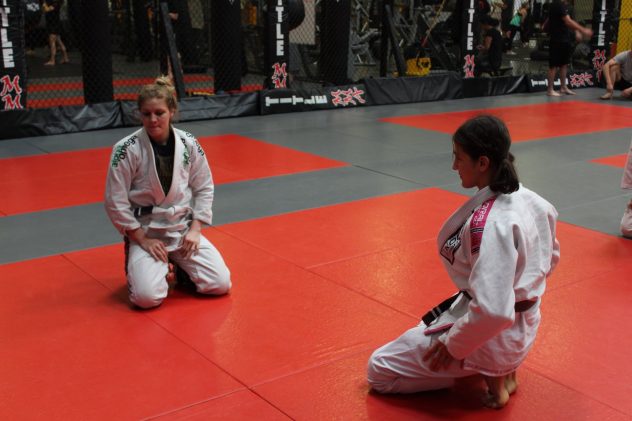 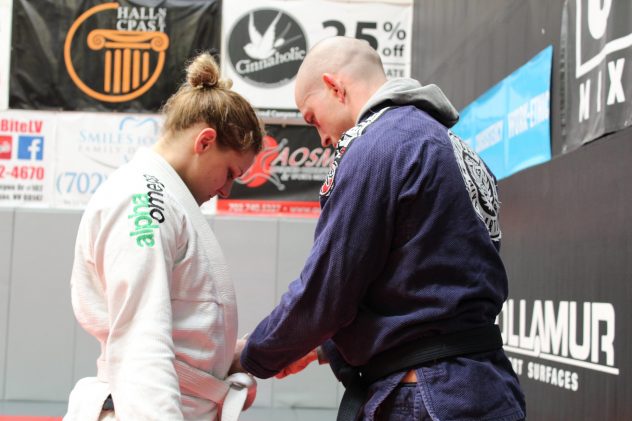 Chelsea in turn has been helping me with my wrestling private lessons! 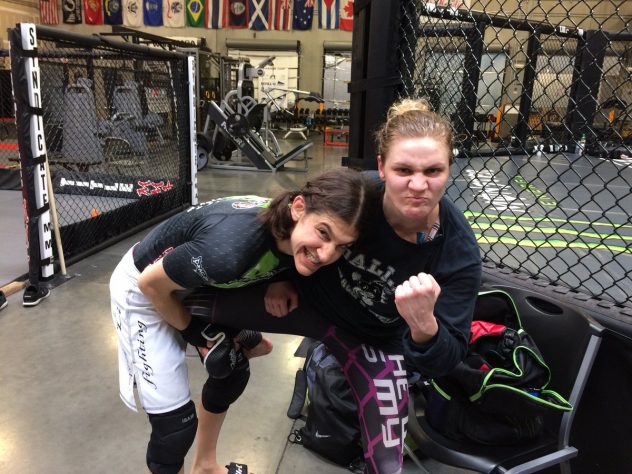 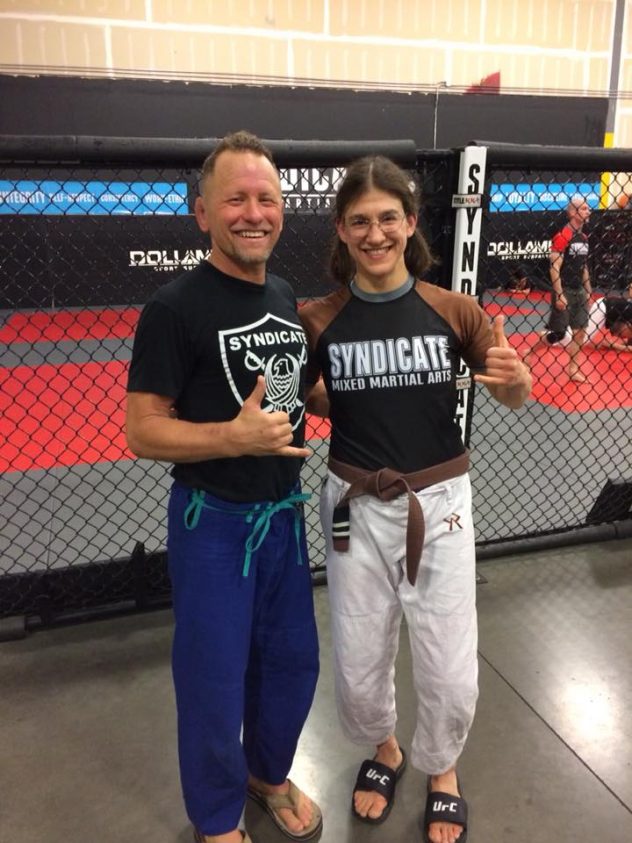 Rick Davis has been helping me out with jiujitsu by rolling with me after Monday and Tuesday’s class. I’M TRYING SO HARD TO MAKE TIME to train. But I think he injured his elbow in a minor car accident so I dunno if we’re gonna roll for a while? But I saw him rolling with Phillip in class yesterday… *sigh* He’s just like Lorenzo (my phyisical trainer). “Oh I got bitten a scorpion and couldn’t walk for a few days. No problem, I’m back today.” omg you guys.

Sarah McCann, native New Zealander living in Japan, is visiting us for a week! I’m enjoying having her here, and I think she’s getting a lot out of training! 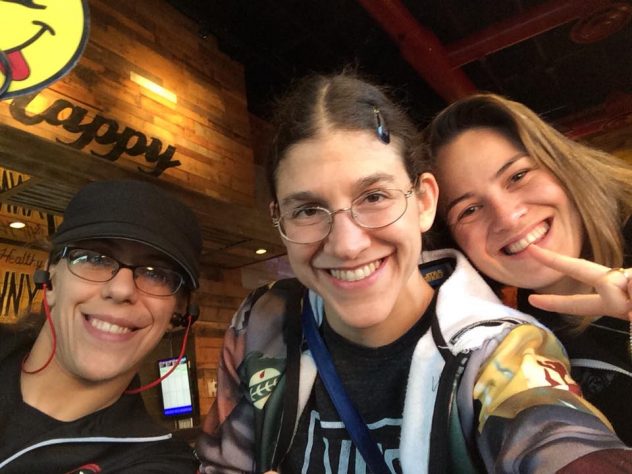 I’m watching some Overlord II and I really like the Lizardmen. I wish they alone were their own stand-alone anime. 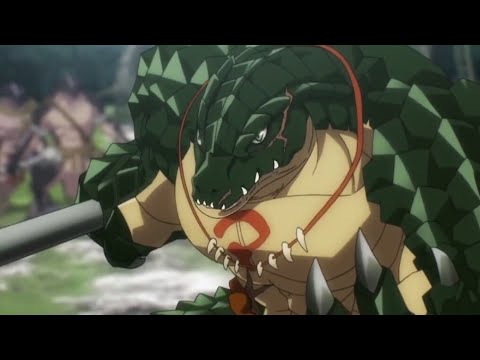 I rewatched the last 3 Jurassic Parks to refresh myself before the new one comes out in the summer.
I’m watching Godzilla vs Mothra. Hide the drapes and turn off the porch lights, Celia! LOL (inside joke). It’s slow paced, so I watch it near my sleep time so I fall asleep after five minutes. haha So I’ve been watching this movie literally for two weeks, five to ten minutes every day. x_x 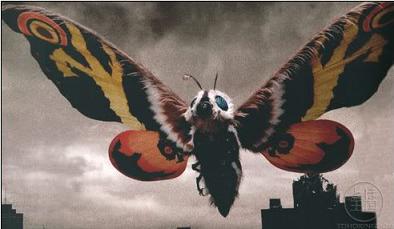 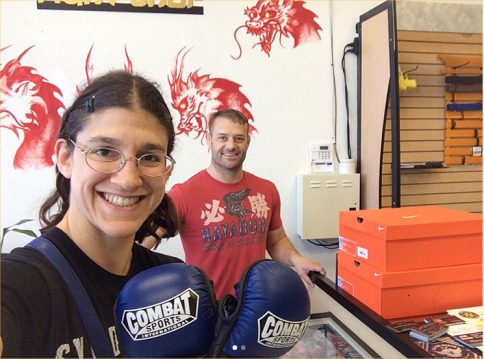 THANKS to my blog sponsor Bill and family at My Consumer IT! myconsumerit.com They specialize in telecommunications, computer networking, computer repair and network and computer security. They also offer services in graphic design, including, but not limited to, logo design and marketing strategies. They are problem solvers for small to medium business needs.