When you think you’ve reached your limit, do it one more time

The secret to becoming stronger, is doing one more.

You sometimes have to play psychological tricks on yourself.
I think that human beings naturally try to get the most done with the least effort possible. It’s a survival instinct. So when we decide to do something, for example, “I think I’ll do 50 push-ups,” our mind automatically gives thought to what the body feels like doing. Right?

So, I should start doing the push-ups and just as my mind thinks, “49~” the other little voice called “will-power” pipes up and says, “Ten more.” My mind thinks, “Oh damn!” but does ten more. It sucks, but I could do it.

I went downstairs during my break at work to get a snack from the convenience store, telling myself, “Maybe I’ll take the elevator back up.” Okay. Bought my snack. Approached the elevator. The voice said, “Follow your new years resolution- NO ELEVATOR. Take the stairs. What, you can’t do five floors? Come on! ONE MORE TIME!” 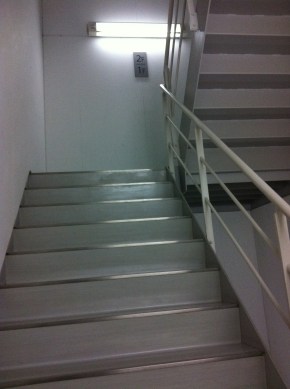 So I do it. You can do it, too. Just one more. That’s what we call “pushing ourselves.” But it’s the mental trick that gets you to do it. Don’t plan it, push it at the last minute.

Last night, I was sparring with Akano. For like an hour and a half. We did grappling at first. She has a killer grip. After a while, I was cracking my neck and shoulders and my forearms were throbbing. *laugh* It was 10:30PM. Then we started doing MMA. at 10:30 PM.

I want to get stronger! I thought, in addition to wanting to help her train. The main class had finished, and everyone was sitting around watching us. Abe-san, Masa-san, and Megumi were all coaching her. (not me, at all.) But whatever, I was getting good training. (Abe-san taught me a technique at the end, so I was happy) After 3 five-minute rounds of MMA, Hitomi said, “One more time please!” Okay. Did it. I was done. I was going to get a drink and Abe-san said, “Take a break and then one more time.” I said, “Um……well….” I was done.

That round was awesome. I felt like I really accomplished something in that round. 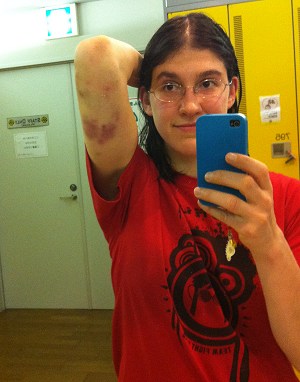