Three years ago, the Great Tohoku Earthquake struck northern Japan. It was followed by a tsunami that washed away entire cities. It was the most powerful earthquake ever recorded in Japan, and the 5th most powerful in the entire world. Wikipedia says that the official numbers are: 15,884 deaths, 6,147 injured, and 2,636 people missing.

The tsunami caused nuclear meltdowns at Fukushima Daiichi Power Plants, causing radiation problems for residents near and far, also contaminating the land, water, and air. Three years later, radioactive water leakage is still a major problem – they are NOT okay now. They are just barely hanging on. The government is lying and trying to cover it up. Myself and the rest of Japan are furious at TEPCO and the government. There are new reports of radioactivity leaking into the groundwater, people in the area getting cancer, etc.

My heart is broken for the good people of Japan, my second home.

That Friday, March 11th, I was on my way to work. I had stopped in a supermarket to buy a snack, when the store and shelves stared shaking a little. Then they started shaking a lot. People threw down their groceries and ran for the door. (yep, ran). Then A LOT OF SHAKING. And we weren’t even near the epicenter. I think we got a 5 or 5.5. Up north, it was a 7-8.

The trains all stopped in Tokyo. I spent the night at the office with two other co-workers, and slept on the couch. I cried my eyes out watching someone’s home video of the tsunami on my co-worker’s laptop.

A few days later, we heard about the nuclear plants, and I asked for time off from my boss. She denied it! So I called her boss. He approved it. But I was already packing. I went with my friend Daniel West to Nagoya, just in case the plant was gonna completely blow up.

I stayed at his friends’ apartment for a week. Thank you for helping us!

Then I went back and tried to to get back to work….. but life would never be the same in Japan again. Food shortages. And selling radioactive produce anyway, and having to read where everything originates and avoid stuff from Fukushima, who’s economy is going to Hell. Charity trips to the North with my gym.

We cleared debris and distributed food to people living in temporary homes. 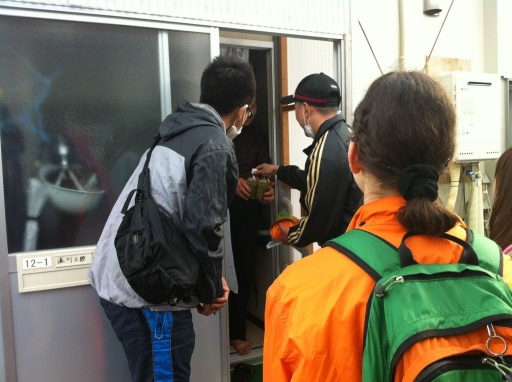 If you’re religious, please say a prayer for the people of Japan. May the souls of those who have fallen rest in peace. I don’t practice an organized religion, but my heartfelt love and good wishes go out to them. My heart still aches for them.