Well, last week was not the best week in the world because my body’s been giving me trouble. Monday mitt-work was great. In MMA class following that, we did a lot of various wrestling stuff the whole class, and that messes me up. -_-; Not like serious bed-ridden stuff, but I couldn’t function so well the rest of the week. Monday’s technique was awesome and it was good practice….but yeah.

Tuesday I did the jiu-jitsu class!! 😀 Everybody else did MMA/kickboxing sparring and I felt like wuss, which makes NO sense since I have a grappling competition coming up, and I need to be doing more grappling anyway. I’ve been enjoying Vinny’s jiu-jitsu classes.

(come see me compete in Fightblok! Nov 8th at the Westgate Casino in vegas, starts at 5 PM)

I taught kids in the afternoon, though, assisting with a particularly large class. I got the super teeny tiny ones, which stresses me out because they don’t listen, and punch and kick each other sometimes. Good thing they are cute….

Wednesday I did mitts and then yoga, and did bunches of chores. Kids and client in the afternoon and evening and then COUPLE’S THERAPY was on TV. x_x;

Thursday I thought I could do hard kickboxing/mma sparring but my body was like “No.” I regretted not doing the grappling class. I got really upset on Thursday. 🙁 grrrr And my chiropractic treatment hurt so much I was crying. I had to quit class to go get it done, and then I hear from the other side of the gym, “ROXY!! GET OVER HERE! PICTURE!” John actually took the time to call me over for a group picture, even though I couldn’t finish class, which was really sweet and I hated myself a little bit less. lol 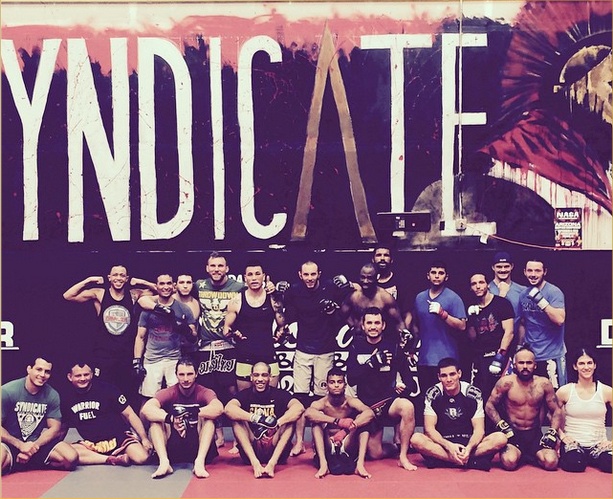 Friday I took off. When I don’t train, I use my energy and clean the apartment. I washed all the floors on my hands and knees, vacuumed, cleaned the bathroom mirror, and picked up stuff and put stuff away.

I went to Tuff-Nuff in the evening in the Orleans Casino! That was nice. Saw some fights, met some fighters and fans and sold some T-shirts. Great event!

I became sponsored by Wartape! They make tape and hand-wraps. I like their tape because it’s stickier than like Walmart brand and doesn’t roll off so much, but not SO sticky that it’s gonna peel my skin off when I remove it. 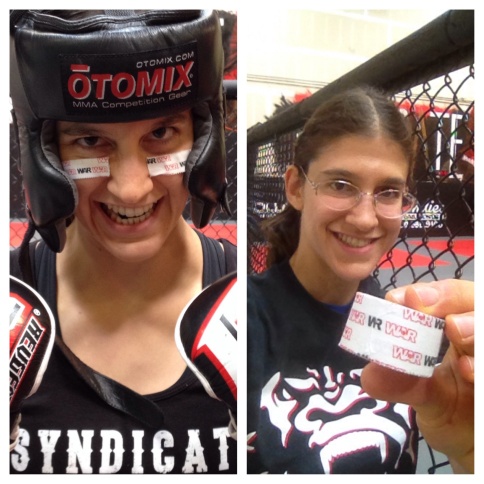 Saturday I still felt crappy so training was a challenge, but I enjoyed jiu-jitsu and had a super fun sparring round with Casey. He’s probably my top favorite person to roll with at Syndicate. I did a few rounds of MMA with Jamie and Liz and then dragged myself to a birthday luncheon, which was really lovely. My headache/neck-ache partly went away by the time I got there.

Saturday evening I wanted to see Bellator but that didn’t work out. That’s all I’m gonna say. 🙁

So about my book, I don’t have any physical copies left right now. They are all sold out! But you can buy a digital version on Kindle on Amazon.com
linky to book on amazon

Sunday I did yoga, watched lots of the TV series LOST, which I really like so far. I’m on episode 6 now. Then, I went shopping with my new student Valerie at Wholefoods. I gave her a nutrition lesson and she bought me some stuff. 😀 <3 Thank you! I feel like sh*t today. I feel like should train with Jamie in the MMA practice because she has a fight coming up, but I dunno. Maybe I'll do jiu-jitsu. These choices are hard. Normal people don't understand. lol *sigh* I'm supposed to love Mondays and I'm already bummed out. I feel like writing something but. 🙁 I wish today weren't gi-day at jiu-jitsu. I want to do no-gi stuff. …