Breakfast was yummy. I bought these sweet bran flakes that I usually don’t buy because I can’t stop eating them half the time since they’re so delicious. But I got tired of oatmeal and my usual bran cereal, so it was a nice treat to mix it with my usual yoghurt/cottege cheese chocolate mix.

Yesterday, training was great.
I sparred with BJ, the headgear guy (don’t know name), Tokoro, Omigawa, and Mizugaki. Omigawa was smirking at me and grinned after we finished sparring because of the conversation we’d had about how guys wouldn’t hit me sometimes. I had thanked him for actually aiming at my face, and he laughed and said, “SURE! :D” I like that guy, even if he is kind of scary and resembles a Saiyan. His hair is cool and spikey.

I really get training that’s just like a fight situation there, and with BJ screaming advice at me live during my sparring, I learn so much!

After that, I rented 5 music CDs at Tsutaya. I’ve gotten bored of all my music, so I got: The best of AKB48 (J-pop girls band), Best of Unicorn (J-rock), Chehon’s new album (J-reggae), Fireball’s new album (J-reggae) and Shonan no Kaze’s new album (J-raggae). I chose wisely! So far, I’ve listened to Fireball and Chehon and Unicorn, which are awesome, as expected. I’ll get around to the others later.

I watched the movie “Knowing” with Nicholas Cage. What a fantastic movie. I was riveted! Suspenseful, intriguing, mysterious, scary at times…. there was symbolism, and they didn’t spoon feed you the answers to the mystery at the end. Supernatural. I loved it.

Actually, I planned to start watching it and take a nap in the middle, because I usually fall asleep during movies. But I was so interested that I didn’t get sleepy, even though I was laying down. o_O; So I ended up NOT taking a nap…..which is kind of bad, actually. ^^;; I really needed it…

I lifted weights at the gym in the evening. Pretty exhausted.

Now I’ve started “Revenge of the Nerds.”
Today will be a long day at work.

Here’s a pic BJ posted on his blog, of the time the guys cooled off after training at Ground Slam. I figured that it was a guy thing, and I showered in the gym. 😛 (pic by BJ) 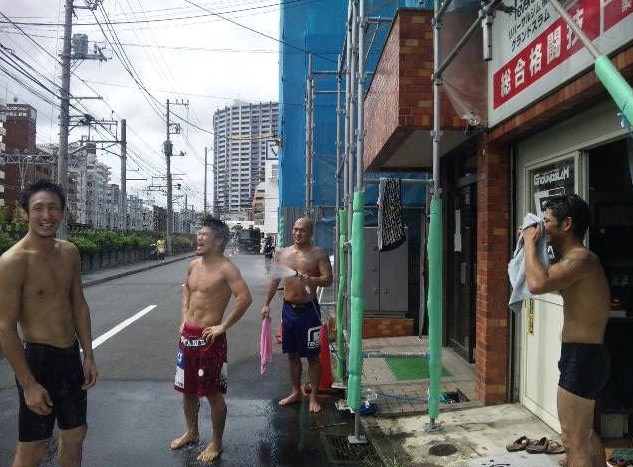