I kind of fell off with my Japanese studying and I’m ashamed of myself. It has been my yearly resolution for years, five years exactly, ever since I left Japan. I’m not talking to my Japanese friends as much, not studying my notes, not writing as many blogs…. I have to do something and be more strict with myself. One reason is that I discovered I could take naps after breakfast. People ask me what I do when I wake up (unintentionally) at 4 AM every day. Well, after breakfast, I clean, do chores, use social media, study, write blogs, watch anime, stuff like that. But then I started falling asleep while watching anime and woke up an hour later feeling GREAT. So I intentionally started putting on slow-moving shows like the old Godzilla movies (sorry Serena) which knock me right out. There goes my extra hour. 🙁

I always keep promises to myself, but maybe I need to reexamine this. Maybe schedule a time, like how at 10 AM every Sunday I call my college friend Q, or 3 PM every Saturday I call Mom. Maybe 7 AM every morning I’ll study song lyrics for ten minutes. That should be doable. That makes 70 minutes every week…

This past week was exciting! On Friday I trained, taught kids, and then took a 10 PM night flight to Boston to visit my Dad and attend my step-brother Peter’s wedding. It was such a nice ceremony and event. Everybody looked great. 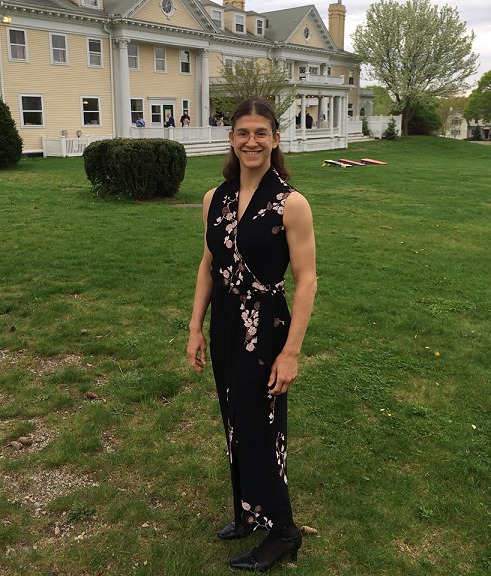 Lots of lovey-dovey speeches and stuff. My dad got remarried after I had graduated from college, so I never grew up with my step-family, but they are really good people. Congratulations, Peter and Megan! 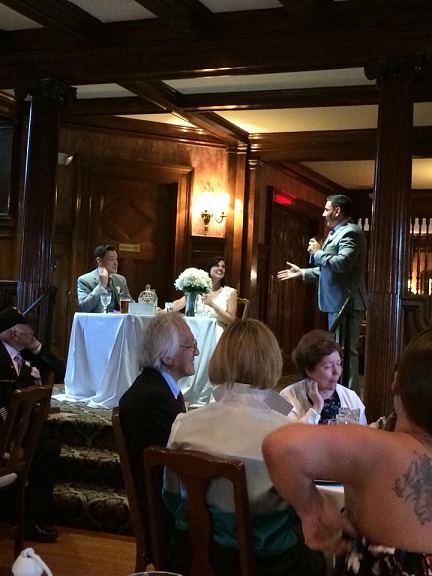 The wedding was Sunday, so Saturday morning, everybody was involved with rehearsals and such preparations, so I went to Joe Lauzon’s MMA academy! It was literally down the street. I really enjoyed the grappling and opted out of the kickboxing part of it. I was sleep deprived, didn’t feel like getting hit in the head by people I didn’t know, and was getting over a light shoulder/neck strain. I grappled some really skilled people! Thanks for the hospitality, guys! 😀 I love traveling but hate how it messes up my training schedule. I always return home to Vegas feeling stiff, out of shape, and not as sharp.

I met Joe when I was a freshman in college, because I went to UMass Amherst and attended MMA and grappling events where he was. I remember a “Mass Destruction” MMA show that helped run because my coach Kirik was friends with the promoter Kipp. I think I helped build the ring. I was sitting at the T-shirts table getting ready to sell them, when someone shouted, “So-and-so dropped out of the fight.” Joe spoke up, “I’ll fight! I have my stuff!”

This was back in 2005 or 2006, I think? He just got in the ring and fought that night. And beat the other guy up. WHO DOES THAT?! That’s freaking amazing. He’s such a bad-@$$. Great person and I’m such a fan. I was so thrilled when he got in the UFC. Such an inspiration. When people ask me who my favorite fighter is, I say “Matt Serra and Joe Lauzon.” 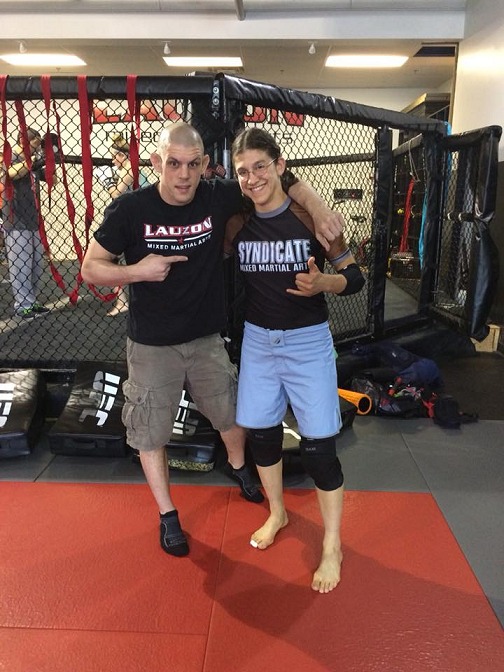 I didn’t get to train with him this time, but it was cool to see him.

I promoted my student Aleena on Monday! I’m so proud of her! She’s been training constantly for about a year and a half. It’s hard to know when to promote kids because I want to award her hard work, but lots of schools hold their kids back so they can go to tournaments and beat up other white belts. It’s also a reflection on my teaching…I have to make sure I teach her enough and teach her well to be a good jiujitsu player. Some schools award belts based on time and attendance, not necessarily ability.

I felt so happy I almost cried to tie the belt around her waist. She was smiling so hard and was so happy! I love her so much! 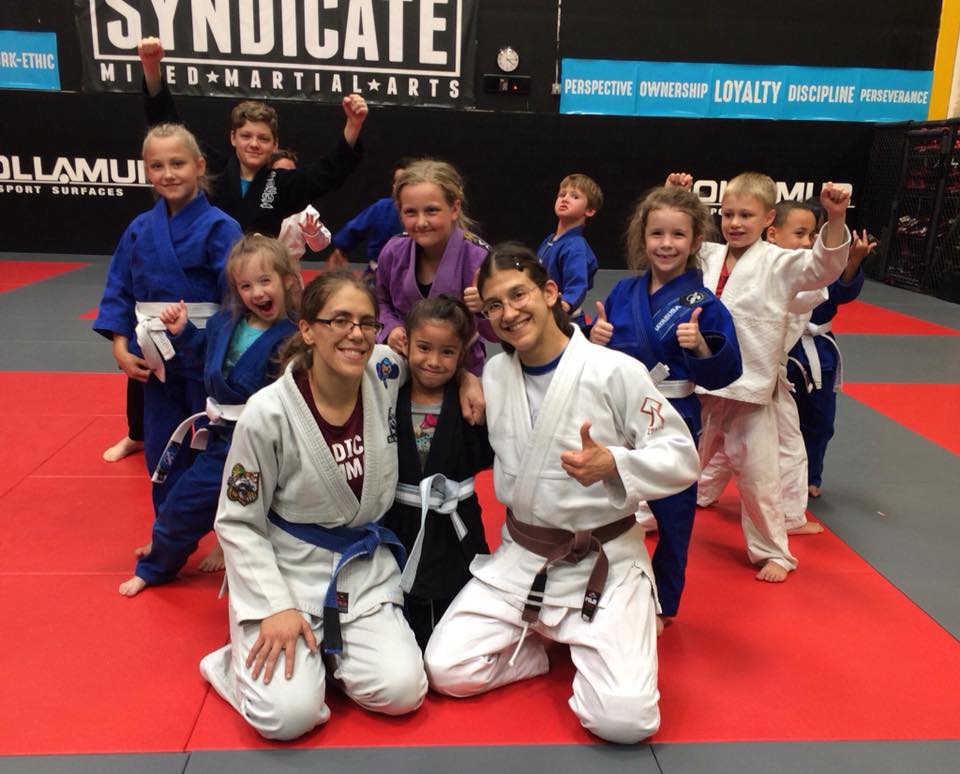 Look at the expressions on everybody’s faces! hahaha So funny and cute!
When I went to take a pic with her, she jumped on my back and half-choked me. Hah. She likes to choke me. But I taught her that chokes are fun, so I do not mind. XD 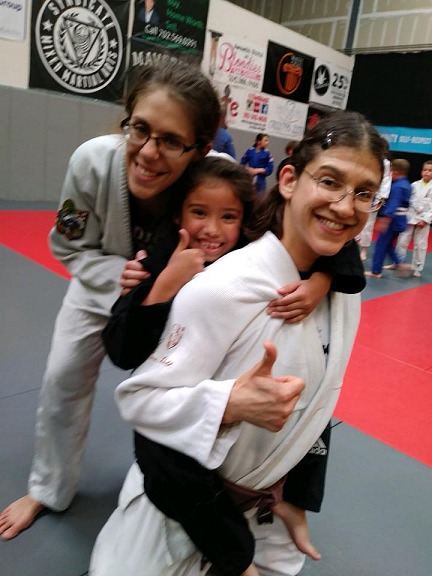 We now have four new gray-white belts in my little kids class. Katie got promoted in the big kids class, so we have three new ranks there. yay congrats! 😀

My buddy and training partner Chelsea Rae has her first amateur fight coming up in June! I’m so excited for her to step in the cage and show her skills! She’s been helping me out by being my partner for wrestling and jiujitsu private lessons, and I’ve been trying to teach her stuff, too. This is literally the definition of “teamwork.” lol She’s looking for sponsors to help out with covering fight expenses, (like private lesson fees, printing clothing, diet food, weight-cut supplies, etc) so if you are interested in helping, hit me up! basilisk875 at Yahoo.com Or message on Facebook or twitter or whatever. 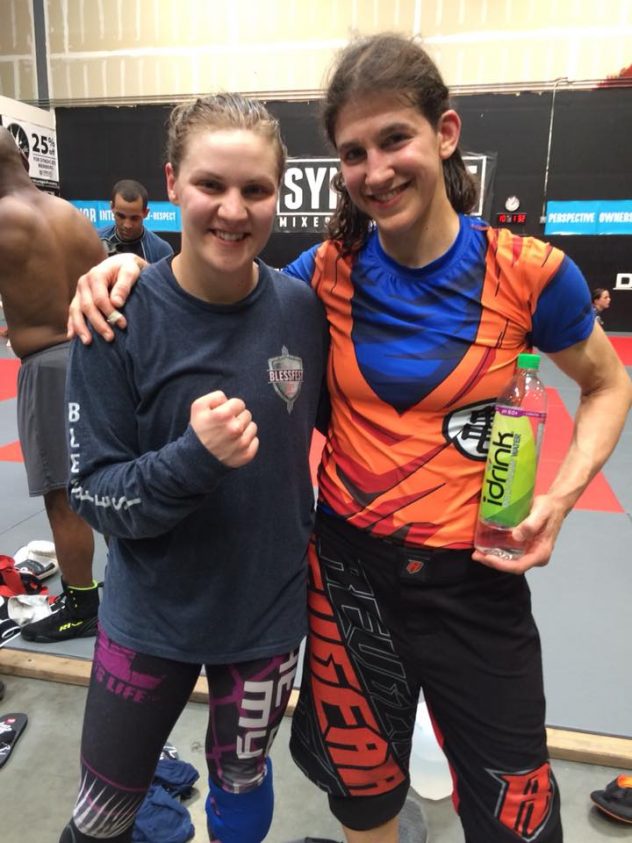 I haven’t done gi jiujitsu in a bit. :/ I miss it, but I have to refocus on my fight prep. I’ve done more conditioning and have started to feel like I’m getting back in MMA fight shape. It’s a totally different state of fitness. Right, John? I invited a new friend I made at Dunham’s BJJ, John Freeman, to come in and do the MMA grappling class with me and help me out, because 1) he’s cool 2) I can trust him not to injure me 3) he can out-technique me 4) he’s around my weight. Thanks a lot! Hope to see you next Monday! 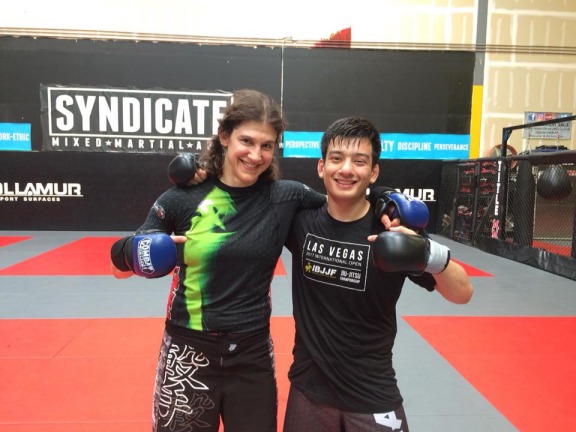 My friend suggested I make an Amazon Wish list… I don’t want people to think I’m fishing for gifts, but why not make a list, I guess? I’ve been blessed with surprise packages from time to time. It makes me happy just to get anybody’s letter or kind word that they are thinking of me and wishing me well!