Yesterday morning, I held a small chat in my chatroom! It’s been a while, so that was nice. ^_^v

I have finished writing my book!! But I have to write a book proposal, and have been struggling with that. I worked on that for a bit, then took a nap. NAP! 😀 REST!

After I woke up at 9:00 AM, I went to Gold’s Gym, did a few warm-up rounds, hit the bag a bit, and then did weight-training downstairs. On Monday, I went heavy on the shoulders and chest, so today I went heavy on the back, and light on the legs. I also found this exercise using the heavybag that works lots of muscles. Maybe that’s why my forearms and shoulders are killing me. :X

After that, I went to the Jonathans diner and ate this caramel pudding parfait! 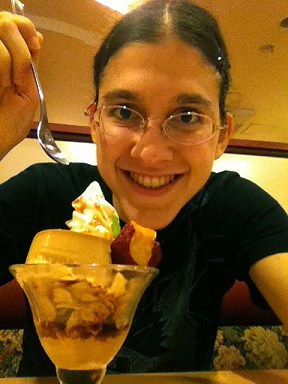 I’d had my eye on the big one for at least three weeks, but had been dieting for the fight. The one I’d wanted had coffee jelly in it, which I don’t like, so I got a sliiiightly different one, but had the same ingredients and WAS AMAZING. XD (The nice waitress put caramel sauce on it but THERE WASN’t SUPPOSED to be any, so she bent the rules. This NEVER EVER happens, so it’s noteworthy. I think she’s new because I’ve never seen her before.) The calories are conveniently written on the menu so I can know how delightfully sinful I was: 400 calories. 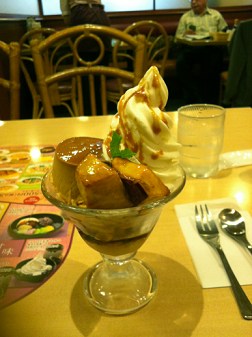 (Another view of this baby!! First, a layer of caramel ice cream, then crunchy corn-flakes, soft-serve vanilla, a mini shu-cream ball, caramel pudding, and two sweet potato chunks with caramel sauce on top that’s not supposed to be there but is yummerlishious)
(of course, I had a big chunk of ham and carrots and celery after that to balance lunch). DESSERT FIRST!!! 😛

I went home and had some of the TURKEY JERKY that I picked up in North Carolina at my fight. omg….So good. I snacked on kamaboko and salad throughout the day, so I got adequate nutrition.

I met Kozo (restaurant owner friend) for tea at noon, and after we parted, I went to Jonathans (another branch) and worked on my laptop that I had brought. I got about 5 chapter summaries/outlines done (out of 30?) Then I went to work! My kid student didn’t come. 🙁 but I was very productive. I had two offices, so I only taught two lessons last night. Easy day at work, for sure.

RUSHED to AAACC and suited up to spar, but it Abe-san wasn’t running MMA training. I shant mention who the teacher was, but he sometimes runs MMA when Abe isn’t there or is doing BJJ. I said “Can I join?” and he goes, “WHAT? You want to spar with the boys? But there are only men here.”

Um, I wasn’t expecting a response other than “sure.” I said, “Yes, please. I join every week.” He said, “uhhhhh, wait a minute!” and rushed off to ASK someone, presumably Abe-san. -_-;

He told me to get ready and wait, and that he’d let me in later. Then everyone stood around and watched one-by-one sparring matches (rather than group sparring where several partners go)…which is a waste of time, in my opinion. I only had 20 minutes before class finished! Each round was 4 minutes….I had a feeling I MIGHT get to go once if I was lucky. I was super irritated, but maybe it was a blessing in disguise because all the men were kind of big. There were no light guys my weight there yesterday. Some body parts are still bothering me, besides….

I chatted with Ayaka (Hamasaki) who was doing the BJJ class on the other side of the room, and she offered to take off her gi top and spar with me, so we did three rounds! Thanks, Ayaka, that was fun and made my night.

I went home and slept! From 11:30 until 5! FIVE, wow.
I really really REALLLYYYYYYY want to go to Ground Slam this morning. I just had like a ten minute struggle with myself. The post-fight self won- she argued that I worked out my muscles hard yesterday, and various things are still hurting me, so I must REST this morning. I’ll work out lightly this evening with the AACC members. It’ll be more fun that way, anyway. This morning is important….I wanna train so badly, but this morning is what? What, Roxy? What?
Roxy2: It’s RECOVERY MORNING.
Roxy1: THAT’S RIGHT. Say it again. I didn’t quite catch that.
Roxy2: RECOVERYYYYYYYYYYYYYYYYYYYYYYYYYYYYYYYYYY MORNINGGGGGGGGG.
Roxy1: THAT’S RIGHT, biotch! This resting is part of your training. No grumbling. No excuses. No over-eating. Shut up, sit down, and rest. Or I keeell you.
Roxy2: hai ;_;

Just had a huge breakfast. Aaaah feels SO good. XD~

p.s. Look at my totally tubular socks!!! got them at Target in North Carolina for a dollar. 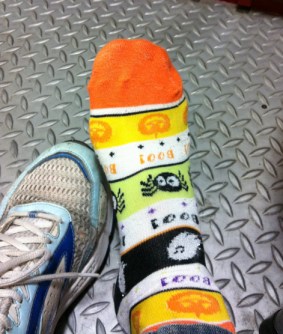