So I did Tae Kwon Do and LOVED it. Ended up I switching to Kempo Karate and loved it more. The combinations we did were real life self defense things, like what if someone attacked you from behind? I also had my first taste of kickboxing sparring.

I started lifting weights in my living room when nobody was looking. I was shy and embarrassed and had no idea what I was doing at 14 yrs old with no instruction, but I liked to listen to my Mortal Kombat movie sound track CD and lift my 5 pound dumbbells hoping I’d get stronger.

Then we moved to Massachusetts and I tried a TKD school in Massachusetts, but I got bored and fed up with striking arts. I decided that hitting people was morally wrong and I needed to be peaceful and non-violent. Everyone should love everyone and talk out their problems. 🙂 I joined the Dalton Judo club. I trained with Sensei Harry and his daughter Carry Chandler a lot. I also commuted (my mom commuted us lol) to 8th degree black belt and silver medalist in the Olympics Jason Morris’ club in New York once a week. This became serious business.

I thought to myself, I wonder when and if I’ll ever fight bad guys.

I loved Judo so much and trained there for three years, only taking a break for soccer season. I achieved a brown belt. 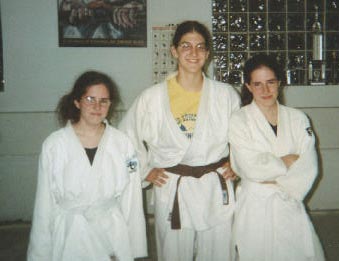 Then I graduated high school and my senior ranked friend John said, “Hey, come to Brazilian Jiu-jitsu class. It’s this new thing.” I was like, “Ppffft, don’t need it.” But in reality, I had injured my back in a Judo tournament and falling and twisting hurt so much. I couldn’t do Judo well anymore. So after weeks of badgering me, I went with him to a Rich’s Royce Gracie association (his basement) in Adams and got hooked. 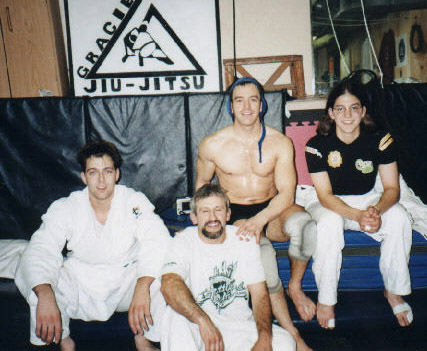 I knew by now that I wouldn’t be fighting bad guys. If someone pulled a gun on me, I’d give them my wallet. If they pulled a knife, I’d run away. If he tried to grab me, I’d kick him in the balls and run away screaming. Only if he got me down on the ground would I break his arm or poke his eyes out or something.

Heaven forbid. My BJJ friends loved the UFC. Again John convinced me to come over and watch with the BJJ team, and I did and thought, “Whoa that’s so violent!” I think my first was UFC 34 in 2001 where I saw Caol Uno fight BJ Penn. Matt Hughes slammed Carlos Newton. Josh Barnett fought. Dang my memory sucks but as I’m reviewing wiki to remind myself of this card, I kind of remember seeing these fights.

I wasn’t sold on MMA.

I did TONS of BJJ grappling tournaments, mainly NAGA. I moved to Amherst, Mass, and tried to find a BJJ club. It was nice, but Rob Feiner, the coach, said Kirik Jenness’ New England Submission Fighting academy was great, too, so I went there and guess what, everybody wanted to do MMA. So I did no-gi and MMA for the first time. Fast forward a few years and I was working for an MMA event “Mass Destruction” and I saw this fighter, Laura DeAugust, fight MMA. I thought to myself, “I grappled against her in the tournaments, I can do that MMA, too! If she can do it, I can do it.” So I decided to do it.

2003 I did my study abroad and told my Japanese sensei, “I wanna do MMA some day.” He said “uh ok.” A month later he was like, “So you wanna fight Shinohara Hikaru in Smack Girl in November?”

Fast forward, I won three fights in a year, and then had a moment of clarity.

It was while I was walking home from training the summer of 2004. I was 3-0 pro. I had a talk with myself. I was a junior, studying for a major in Japanese Language and Literature. What was I going to do with my life? It sure as hell wasn’t going to be fight full time, and I knew that. A few hundred dollars per fight? I needed a good job- like a high paying job- translator would be nice. I would have to finish graduating school, and get a nice job and train on the side.

I decided that my goal was to be the first woman in the UFC! I would work hard to make my dream come true. Then I told my parents I was doing MMA. LOL Read my autobiography for details.

My career took off and I was pretty successful.

I met my future employer in an elevator in Japan when I went there to fight, and ended up getting hired to teach English. In that way, I got the job I wanted that had a schedule that would allow me to train and fight.

Eight years and many fights I was in Japan. Then I started going downhill around 2010.

MMA had really taken off in America and was declining in Japan. I kept losing. One. Two. Three. Four in a row. I tried dropping weight classes, getting various striking coaches…but I could just NOT LEARN STRIKING well. Sean did teach me the shuffle step and thinking in angles and triangles. We had a falling out but he did help me with my stepping ….until then I could only go forwards and backwards. I trained so much and so hard, and my grappling got better, but my kickboxing just stayed sucky. It was crazy. I went through periods of giving up trying, to trying hard, to giving up and despairing.

But I kept losing. Had a lot of amazing experiences and met great people….

…and my body hurt. It seemed like I could barely recover. I was falling asleep in front of my stunts at work, my back was so bad I couldn’t train hard two days in a row. I could barely raise my left arm half the time. Every day. BUT I KNEW that I had some potential, that I COULD do it if only…..something. I didn’t know what that was. If only. I sensed it. So I refused to give up.

Then the Ultimate Fighter season 18 happened!

I was on a losing streak but I got into the house! And I was TV star! And experienced what it was like to train in America. WOW! SO DIFFERENT. And in ENGLISH. I could understand! so many times when I asked my Japanese teachers something, they’d be like “You can try it like this or this but figure it out.” grrrr noooooo I don’t want to figure it out, I want you to tell meeeeeeeeee.

So TUF 18 happened and I lost and got out and decided, “My body doesn’t have much time left, so if I’m gonna do this, I better do it now.” So I quit my beloved job and left my adopted country on two months’s notice (that I wouldn’t even leave after the power plant blew up and blasted radiation everywhere) and moved to Vegas. Tried Drysdale’s gym. Loved it. Almost joined. Decided to try Syndicate MMA out of courtesy for my friend Amanda H. (Lucas) who had been inviting me for years. Took John Wood’s MMA class and holy sh*t. The type of training, style, and everything was so on point, it suited me, and I could understand what he was teaching. After a few days of trial, I decided to join Syndicate.

And then there was Jake Steckel.

Super chiropractor. He kept me from breaking and kept me training and fighting. It was like a miracle. I started taking striking private lessons with John twice a week every week.

It’s kind of ironic that the two most important turning points in my career came from men named John.

When I lived in Japan, I tried not to go on vacation or I didn’t buy expensive things. I got all my furniture from thrift shops and what people left outside on the curb. I shopped at goodwill. I almost never went out and splurged and ate at super expensive restaurants.
I had this feeling I would be living off my savings someday. Recently I met the super masseuse Teri and I haven’t felt this healthy since I was 25, and here I am at 33.

I’m signed to Invicta, a really great organization. I’ve had a lot of fights with them. They treat me so well. I have nice sponsors who decorate my fight clothes and support my training with their funds. and my weigh-ins will go down in history.

People don’t start fighting to make money. Training is too hard for that. We do it because we love it. I’m at the point now where I wanna be able to make some more money that I can put away for when I can’t fight. Right now, if I didn’t have my savings, I’d be in trouble. But…. I also want to just fight. FIGHT MORE. I want to show the results of my training. I want to show that I’m the best. That’s what my heart desires. I want to fight more than twice a year, but it’s hard. Every fighter wants to fight a lot but we have to wait for the promotion to set it up, and there’s stuff involved, so I can’t really blame promotions. It’s just the way the MMA game works.

I’m so motivated. The first thing I think about when I wake up. “Am I going to be able to land XZY technique in training today?” Every day is exciting. Every day is fun. Every day I have a chance to perfect moves and then I inevitably want to try them in a fight. Except my future is not financially secure. I can ignore that for now.

And somewhere along the way I realized that you don’t have to wear a costume to be a hero. I’ve always wanted to be a Power Ranger, and maybe this is my way to be one. Although I do have a Red Ranger costume. 🙂

The Red Ranger fought Batman once.

I have many costumes, actually.

I’m really happy with my life. I’ve accomplished so much! I think people won’t forget me when I stop fighting. But I’m still training so hard and improving so much every month. I want to get stronger and stronger. With the help of Teri and John and Team Syndicate, I feel like I’m picking up steam rather than slowing down. And I love being a mentor to up and coming fighters and my kids class.

I love spreading positivity to anyone who will listen to me.

I hope I get to fight soon! I’ve learned some cool new stuff and I wanna do it on my opponent before I forget because my memory sucks. Ask anyone who knows me…..LOL…